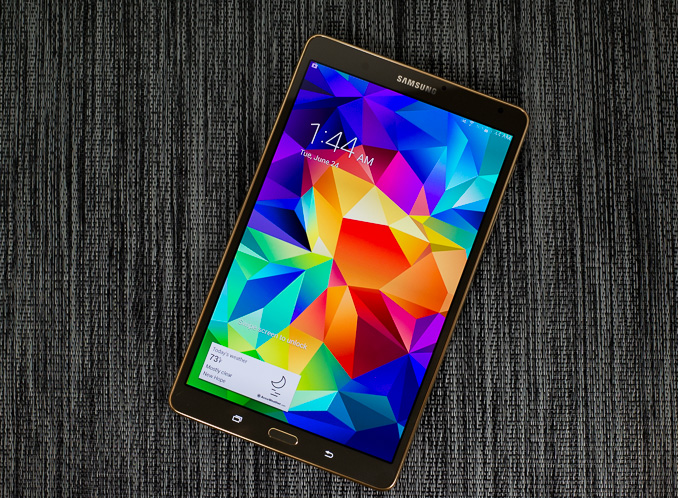 Samsung’s tablet lineup can be confusing to follow. There’s the regular Galaxy Tab lineup which is on its 4th generation and is available in three different screen sizes (7, 8 and 10.1-inches), all with 1280 x 800 displays. If you want a higher resolution panel there’s the newly announced Galaxy Tab Pro line, also available in three sizes (albeit different ones at 8.4, 10.1 and 12.2-inches) at 2560 x 1600. If you’re dying for an active digitizer there are the Galaxy Note Pro and Galaxy Note models as well. A quick search of WiFi Galaxy Tabs on Samsung’s site shows off a total of 25 active models, an intimidating list if you’re just browsing.

That all started to change earlier this month when Samsung opted to dust off its most popular smartphone sub-brand and apply it to a pair of new tablets. The Galaxy Tab S is designed to be the tablet counterpart to the Galaxy S smartphone. Available in two different sizes (10.5-inches and 8.4-inches), the Galaxy Tab S is also the only current Samsung tablet to feature a Super AMOLED display. The move to AMOLED brings with it great contrast and an incredibly thin display stack, which pays off handsomely in reducing the overall chassis size of the new tablets.

Both Galaxy Tab S models measure 6.6mm thick. That’s thinner than any of Apple’s iPads, as well as the iPhone 5s and Galaxy S5. In hand it’s arguably the weight that’s more noticeable though. The 8.4-inch version weighs in at only 294 grams, barely heavier than a 2013 Nexus 7. The 10.5-inch model is just shy of the iPad Air at 465 grams (vs 469 grams for the iPad Air, admittedly a testament to just how light the Air is given its aluminum build).

Although the display is a big part of the Tab S value proposition, its form factor and weight are really top notch. Both devices feel incredibly light and are great for one handed operation. The Tab S 8.4 is probably the better balance of display size and portability. I’d argue that the 10.5-inch Tab S, particularly in landscape mode, can be a bit much for prolonged one handed use but I think I made a similar comment about the iPad Air when I reviewed it last year. Either way we’re quickly approaching the holy grail of tablet dimensions and weight.

The Galaxy Tab S features an all polycarbonate construction, like its smartphone counterpart. The styling is also borrowed from its more mobile brother, with the same pattern around back. The plastic ring around the tablet ditches the ridged treatment of the Galaxy S5 in favor of a flat, brushed finish. Both sizes are available in two colors: dazzling white and titanium bronze. Samsung sampled us with a 10.5-inch Tab S in dazzling white and an 8.4-inch Tab S in titanium bronze. Both colors feature the same gold color around the edge of the tablet. 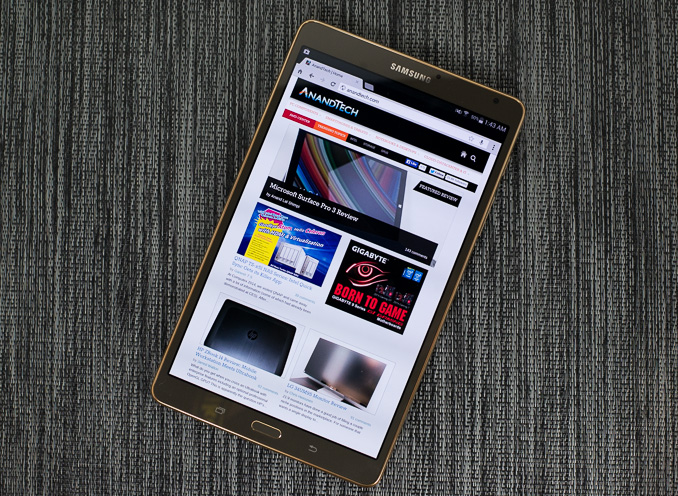 I’m personally not bothered by the construction of the Tab S, but there’s no denying that the iPad mini and Air have a more premium feel to them. In the case of the Air, the weight difference is negligible. In the case of the mini vs. the Tab S 8.4, Samsung does manage a noticeable 11% weight reduction.

The Tab S ditches USB 3.0 from the GS5 in favor of a smaller micro USB 2.0 port. The global models we were sampled feature 16GB of internal storage (32GB is optional) with a microSD card slot for external expansion. Both tablets feature IR transceivers and stereo speakers. The global variants we received are WiFi only and use Samsung’s Exynos 5 Octa (5420) SoC, although North American bound LTE models will use Qualcomm Snapdragon 800 silicon (MSM8974AB v2) with integrated modem. All Tab Ses ship with 3GB of LPDDR3 memory. 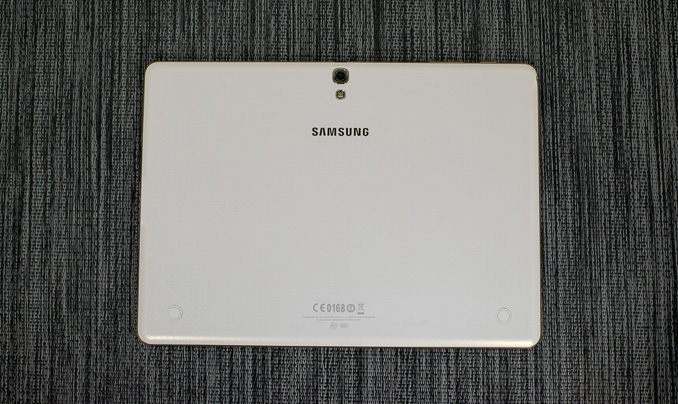 Borrowed from the Galaxy S5 is the Synaptics powered fingerprint scanner integrated into the Tab S’ physical home button. The fingerprint scanner design is identical to that of the Galaxy S5, although as I mentioned in my hands-on preview of the devices I believe the implementation is improved in Tab S. You go through the same 8-swipe process to register your finger, and you can store up to 3 fingers for unlocking the device. Swiping multiple fingers during a single finger’s registration also expands the number of fingers you can store. 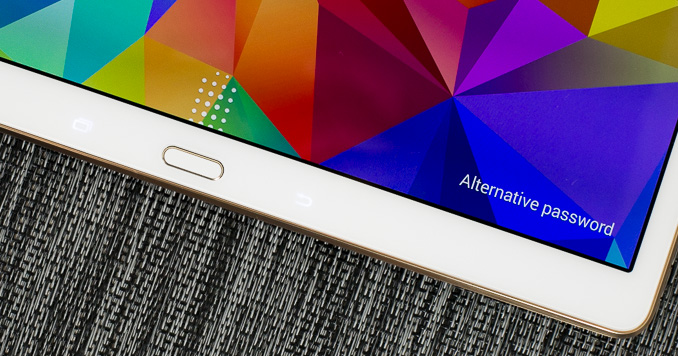 Overall the fingerprint unlocking experience is much better on the Galaxy Tab S than on the Galaxy S5. For starters, you’re far less likely to attempt to hold the tablet and do a fingerprint swipe with a single hand like would on a phone. The two handed approach alone has a huge impact on fingerprint unlock success rate. I tried quick, slow and variable speed swipes over the fingerprint sensor, all of which worked. I tried fingerprint unlocks with the tablet on a desk, propped up as well as held in the air in my hand - again, all successful. The biggest issue I ran into was trying to unlock using the tip of my finger perpendicular to the surface of the scanner vs. just dragging it across, more parallel to the scanner. Despite registering my finger at an angle I could never get the more perpendicular approach to work. The iPhone 5s’ approach is still probably the better way to handle this, but at least compared to the GS5 things are better on the Tab S. And like I said in the Galaxy S5 review, I’d still take the swipe scanner over not having one at all. 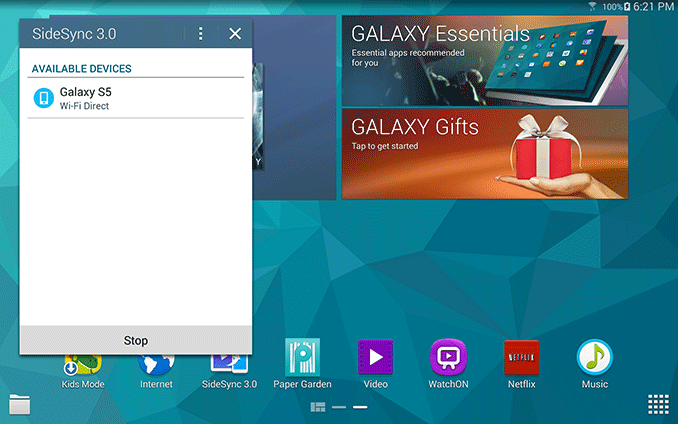 SideSync is the other big software/hardware feature with Galaxy Tab S. SideSync leverages WiFi Direct to give you access to your Galaxy S5 smartphone from the Tab S touchscreen. Just make sure the GS5 and Tab S are both on the same WiFi network, and then run the SideSync app on both devices for them to find one another. The Galaxy Tab S has SideSync preloaded on it, and you can download the app from the Play Store to your GS5.

The pairing process is remarkably painless. Just run SideSync on both devices, the Tab S finds your smartphone in a few seconds, tap on the device and you’ll be presented with a virtual device on the Tab S’ screen: 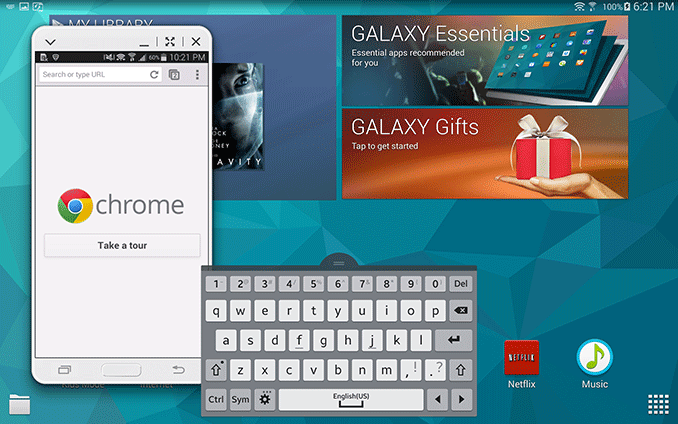 You can rotate the device and go into full screen mode. There’s no network sharing between the two devices, all you’re seeing is the display encoded and piped over WiFi to the Tab S (with touch commands being sent back to the smartphone). There’s a minimal impact to CPU utilization as it seems like the decoding of the video stream is done using the Exynos 5420’s hardware video decoder. There’s a bit of overhead on the smartphone itself but the impact to performance seems limited to the 10 - 20% range. Audio is also streamed over along with video, so you can watch videos streamed over from your phone on a virtual phone on your tablet - if you’re so inclined.

Although SideSync is expected to work with the Galaxy S4, Galaxy Note 3 and Galaxy S5, you can receive calls on your Galaxy Tab S if you SideSync with a GS5. You need to have SideSync enabled and paired, but once you do you can answer calls directly on your tablet. I haven't had time to measure the battery life impact of leaving SideSync active all the time on your GS5 and Galaxy Tab S, but I suppose that's a concern worth keeping in mind. 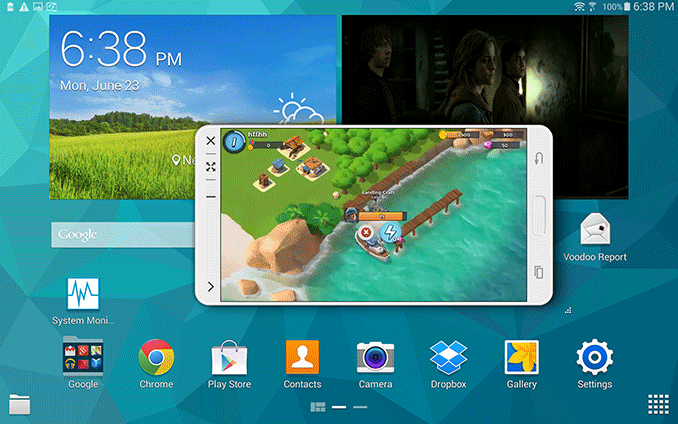 The usable range for SideSync really depends on what you’re trying to do. If you’re streaming video and audio and don’t want any interruptions, you’re going to want your phone within several feet of your tablet. For web browsing and even turn based gaming I had no issues streaming from a phone over 20 feet away and in immediately adjacent rooms. There’s some obvious quality loss as you’re staring at an encoded video of the smartphone’s display, but SideSync manages to work surprisingly well. There’s support for quickly copying a URL from a browser on your phone to your tablet, and you can also drag files/pictures/videos to copy them locally. It’s not quite as seamless as dragging and dropping on a Windows or Mac, you still have to wait for the Tab S to launch its file manager to select a destination for anything you want to copy but it’s a neat feature nonetheless.

You can minimize SideSync to an icon, or float it over virtually any other window on the Tab S. It’s pretty flexible and works, although I must admit I don’t see myself ever really using the feature outside of this review.

Samsung sent along samples of its simple and book covers for both Galaxy Tab S sizes. The covers button directly onto the tablet itself, anchoring to two points on the back of the device. It’s a secure connection but one that’s a bit awkward to get in/out of. The magnetic covers we’re more used to seeing with tablets are effortless to mount, but they aren’t quite as secure once mounted. 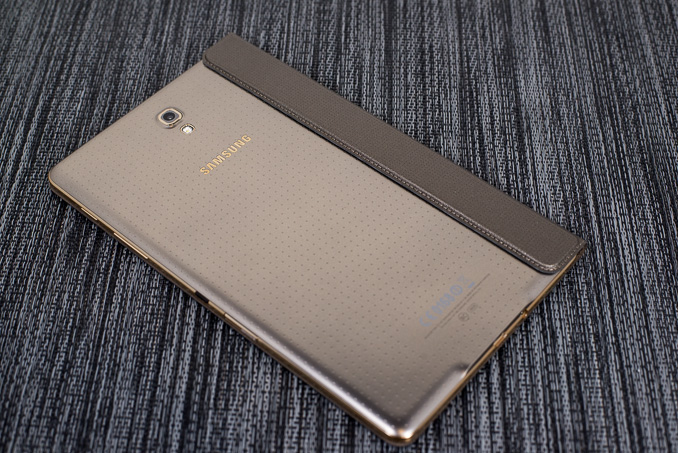 The $39.99 simple cover offers nothing more than protection for the screen when covered. It doesn’t double as a stand and can’t protect more than a single surface at a time. The more interesting option is the Book Cover: 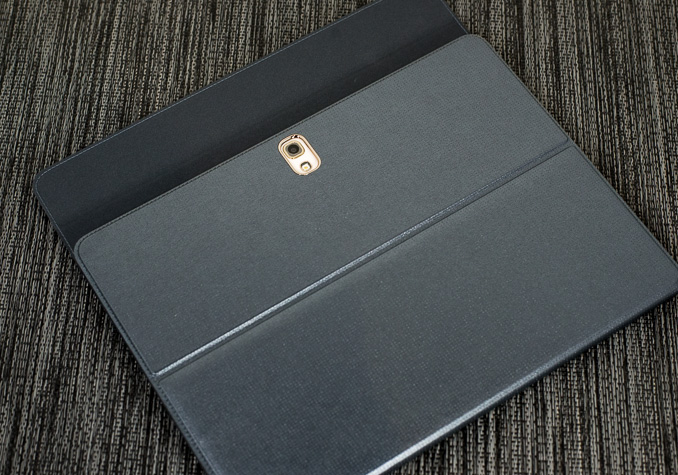 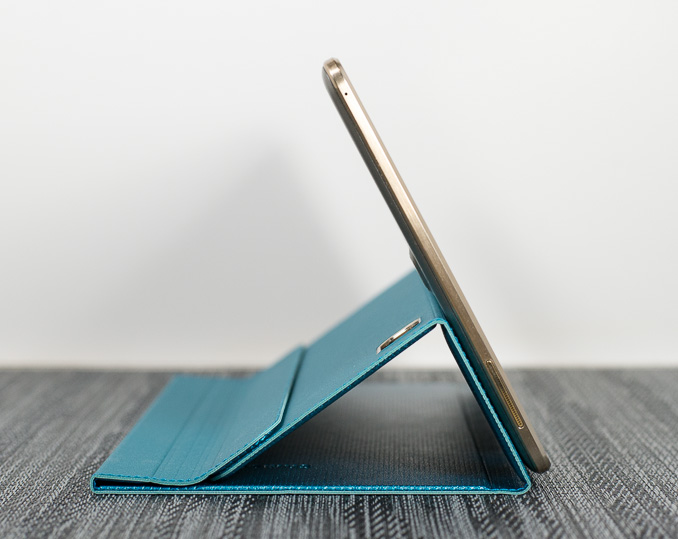 The material quality of the two covers isn’t particularly impressive but the designs serve their purpose well.