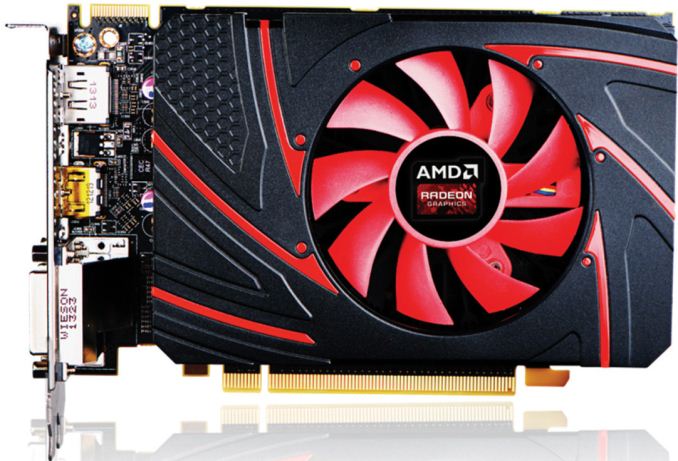 As it turns out, February is going to be a busy month for GPUs. Normally February is something of a quiet month, surrounded by CES on one side and GPU trade shows like NVIDIA’s GTC on the other, but for 2014 we’ve seen and will continue to see a number of important launches as the month rolls on. The start of this month saw the launch of AMD’s first Mantle enabled drivers and the first Mantle enabled software, and today AMD is back with a new and somewhat low-key product launch to help fill out their product stack.

Launching today is AMD’s new anchor for the $99 price point, the Radeon R7 250X. The 250X is intended to fill a price and performance gap between the low-end Oland based R7 250, and the more powerful but more expensive R7 260 series. This anchor position was previously filled by the 250 at $89, but due to a combination of slow uptake on the R7 260 and competitive pressure, AMD has decided to push out something more powerful at $99.

Since the R7 250 was already a fully enabled Oland part, and the R7 260 was already a cut-down Bonaire part, to fill the gap AMD is calling their GCN 1.0 based Cape Verde GPU back into service. Cape Verde powered what’s now the officially discontinued Radeon HD 7700 series, spending most of its life serving as AMD’s sub-$150 budget backbone. For 250X AMD is going to be doing a straight rebadge of the most powerful 7700 part, the 7770 GHz Edition, bringing the 7770 into the Radeon 200 family. This is similar to what AMD did a couple of years back with the 5700 series, ultimately rebadging the entire series as the 6700 series. We're not fans of the practice, but with the 200 series already containing a mix of old and new GPUs, this is hardly disruptive.

Since the 250X is a straight 7770 GHz Edition rebadge, we won’t spend too much time going over the specifications since we’ve reviewed this before. With 640 SPs and 16 ROPs, it sits comfortably between the more expensive 260 series and the existing Oland based R7 250 in specifications and performance. Both Oland and Cape Verde are GCN 1.0 GPUs, so while the fact that both GPUs share the 250 series name is a minor annoyance, from a feature standpoint they’re going to be identical. Though this does mean that the 250X will be at a feature disadvantage relative to the GCN1.1 based 260 series, lacking TrueAudio support among other features, giving buyers a tangible reason to step up to the 260 series. 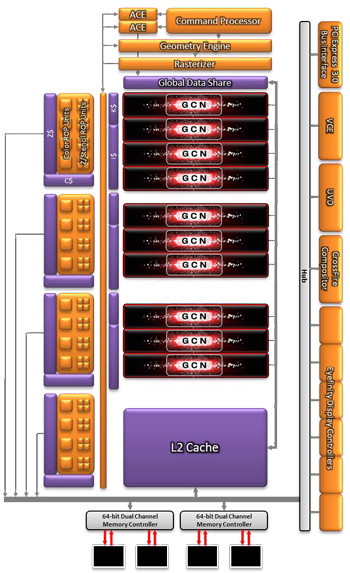 GPU specifications aside, let’s quickly talk about memory. This launch is being done on a very short turn around, so we haven’t been able to get AMD to confirm the complete memory specifications for the 250X. Historically, sub-$100 AMD cards almost always feature a mix of GDDR5 and DDR3, and it’s unclear at this moment whether the same will be happening for the 250X. AMD has told us that there will be 1GB and 2GB cards, which leads us to believe that we’re going to be seeing 1GB GDDR5 cards and 2GB DDR3 cards side-by-side, especially if AMD’s partners want to offer 2GB cards at $99. The specifications we’re going with for now are AMD’s official specifications, which cite GDDR5, but we’ll update this once we get confirmation. DDR3 would significantly cripple the performance of the 250X, so if this comes to pass the GDDR5 version of the 250X would be the only one worth serious consideration.

Meanwhile from a performance perspective the 250X is going to be quite a bit more powerful than the 250 for a very minor price increase. The big increase in stream processors and ROPs directly translates into a big increase in performance, with the 250X set to outperform the 250 by 30-50%. From a practical perspective this means that while the 250 struggled with 1080p at any quality setting, the 250X should be comfortably above 30fps in most games at low settings. Next to the slightly higher price tag, the only real tradeoff for the 250X will be power consumption; 250 remains as AMD’s best sub-75W card, while 250X will require 95W and an external PCie power connector, just as 7770 before it.

Since the 250X is a 7770 rebadge and there isn’t any “new” performance data to look at, we’ll skip an in-depth look at performance. For $99 it should generally outperform anything else for the price, as we can see below in Bioshock Infinite. 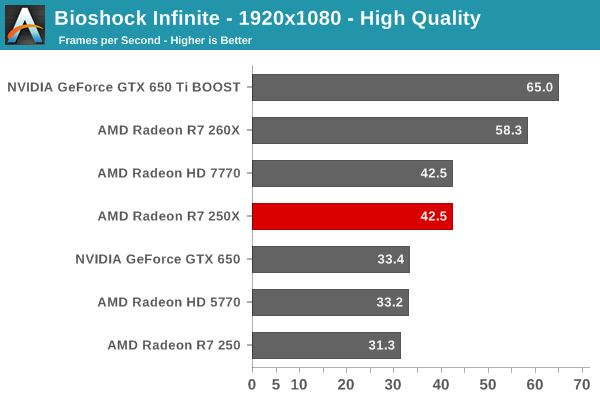 AMD tells us that 250X should be shipping today, though given the fact that we’re in the middle of the Chinese New Year we’re taking a wait-and-see attitude on that. But because it’s a rebadge 250X will take relatively little work to start production on; for AMD’s partners there is little to do besides resuming 7770 production with an updated BIOS and new branding. So we expect that most 250X cards will be identical to their 7770 predecessors, with modifications made as necessary to support the 2GB configuration.

Finally, at $99 the 250X will be launching into a very dense cluster of competitors. Against AMD’s other sub-$100 cards it should perform favorably, significantly outperforming both the R7 250 and 7750, the latter of which continues to be readily available around $99 despite being formally discontinued months ago. The R7 260 series on the other hand should outperform the 250X, but with the 260 minimally available due to low uptake and well off its $109 MSRP as a result, the only meaningful competitors for the 250X are the 260X and the 250, securing the 250X’s place. As an added bonus, this means that the 250X will be launching at a lower price than the original 7770 is currently available at (~$110), making the 250X a de-facto price cut for the 7770.

As for the NVIDIA competition, the closest competitor to the 250X is currently the GTX 650, which has an average price a bit over $100. 650 never did fare well against the 7770, so the 250X should easily enjoy a 20%+ performance advantage. 650 Ti will be much closer in performance, but outside of the occasional sale is almost always found at $120 or more.