We have covered the home networking battle between HomePlug and G.hn in various articles before. Peter White has an excellent piece analyzing the positions of the respective camps here. G.hn is quite an attractive proposition, aiming to get a networking device work over multiple media (coax, phone lines and power lines). As such, it has the ability to fully replace MoCA, HomePNA and HomePlug in the networking space. G.hn is an ITU standard which was ratified in June 2010.

While the G.hn consortium was working on the standardization and getting silicon ready, HomePlug has quietly been expanding its install base. It is finally the extent of market penetration which will decide the winning standard. Will service providers be ready to start afresh for technology / silicon which might currently appear superior on paper? While G.hn compliant silicon can have a PHY rate of 1 Gbps, the IEEE P1901 compliant Qualcomm AR7400 has a PHY rate of 500 Mbps. The upcoming HomePlug AV2 (HPAV2) standard is expected to match G.hn in terms of PHY rates.

Sigma Designs took the early lead in introducing G.hn compliant silicon with the CG5110. We saw this chip in action at CES 2011. Lantiq also demonstrated their G.hn chipset at the same time. Today, Marvell is announcing the availability of their first G.hn chipset (the 88LX3142 digital baseband processor transceiver and the 88LX2718 baseband analog front-end) along with a reference design and firmware (SPIRIT) based on the UPA PLC (United Powerline Alliance's powerline communication device). 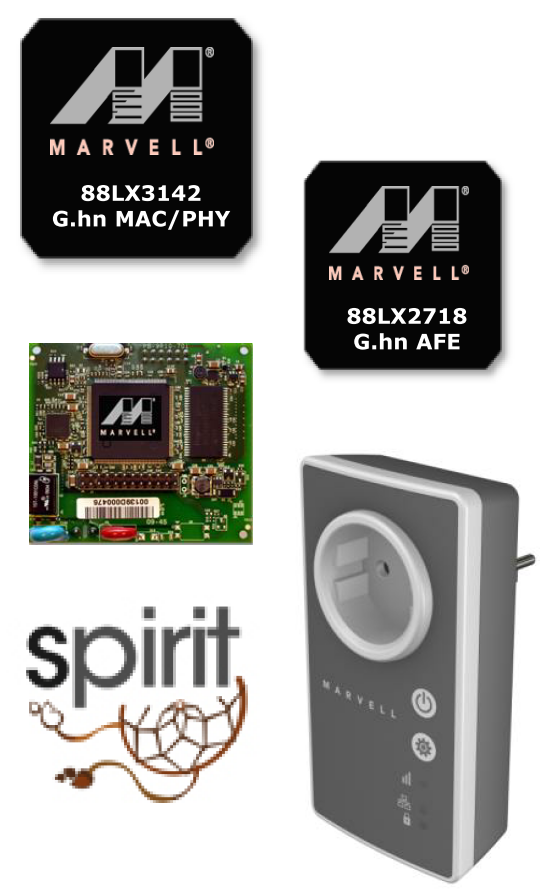 Marvell's presence in the G.hn market can be traced to its acquisition of the Spanish powerline networking firm, DS2 (Design of Systems on Silicon). DS2's powerline standards organization, the UPA, had been up against HomePlug till 2009. However, it could only strike base with some service providers like Telefonica and SinTel, and could never get into the retail market. The presence of HomePlug products in the retail market has served to extend its install base, making system manufacturers and also the relevant service providers hesitant to move on to non-interoperable, or worse, non-co-existing standards.

Marvell indicated that more than 20 early adopters (including OEMs and ODMs) have opted for Marvell's silicon and it probably includes a major chunk of the erstwhile UPA's customers. The fact that the 88LX3142 can coexist with the UPA installations should have made it easier for them. Retail availability of products based on this silicon is expected to be towards the end of Q4 2012.

Consider the usecase of a connected TV, where the antenna signal comes through a coax cable. In that case, the TV can connect to the home network via powerline.  However, the coax is not active all the time. In this case, the TV can shift to the coax for networking because it would deliver higher throughput / QoS. With G.hn, this can be done with a single chip, but IEEE P1905 would require complex software and product design as shown below. 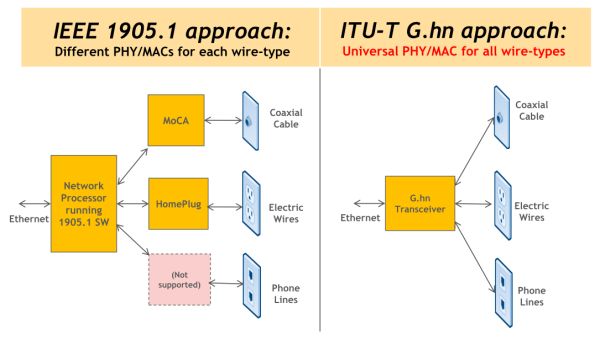 The use case definitely appears very interesting, and it is good that we are having multiple vendors coming out with silicon around G.hn. However, it takes more than a year to move silicon to deployment (especially with service providers). In the meanwhile, HomePlug / P1901 devices are expanding their base. This brings us to the next aspect, namely interoperability and coexistence.