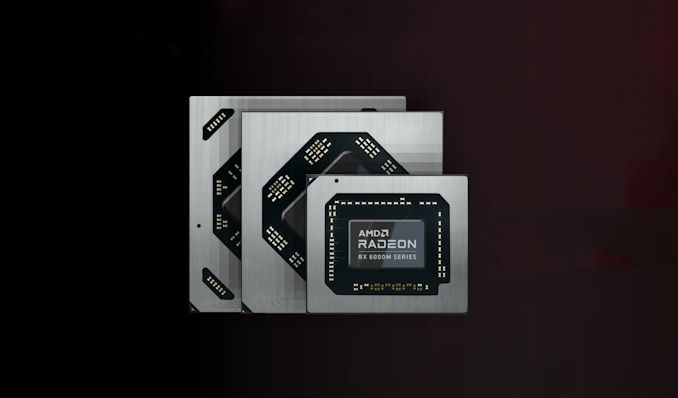 As part of a jam-packed CES keynote presentation this morning, AMD has announced a slew of updates to its mobile graphics lineup. Altogether, AMD is introducing one new GPU and 8 new SKUs this morning, almost quadrupling the size of their mobile graphics parts catalog. Combined with the Ryzen 6000 Mobile series announcement, it’s clear that this year AMD is going to be heavily focusing on laptops, and that is going for both their CPU(APU) and GPU businesses.

Getting right to the heart of matters, the marquee announcement for mobile graphics out of AMD this morning is the announcement of a new sub-series of mobile parts, the Radeon RX 6600S series. These new parts are based on AMD’s existing Navi 2x GPUs – specifically Navi 23, it would seem – with AMD taking a particular interest in thin and light laptop designs. Indeed, even the name alludes to this, with the S standing for “slim”.

According to AMD, the Radeon RX 6000S series is designed for use in sub-4.5 pound notebooks that are also under 20mm thick. This is a laptop range that AMD can already serve today with the likes of the Radeon RX 6600M, but it’s also something where they want to do better. Specifically, AMD wants to better optimize the power efficiency of their chips (and the laptops driving them) to allow for better performance in these styles of thin and light laptops. To do this, AMD is implementing some new power efficiency boosting technologies, though at least ahead of CES the company isn’t disclosing anything more about what those technologies are. 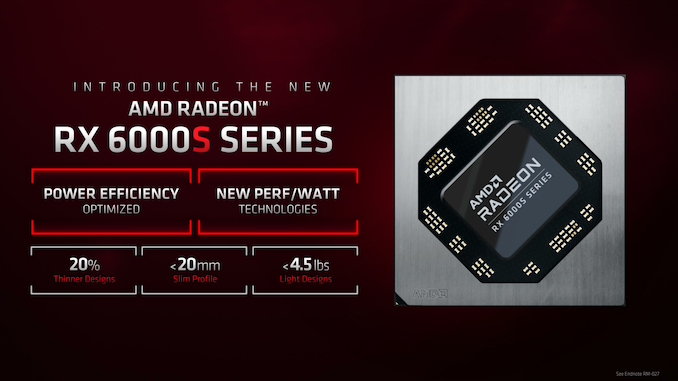 More fundamentally however, while AMD isn’t going as far as to explicitly say it, the 6000S series seems to be their answer (or at least analogue) to NVIDIA’s popular GeForce Max-Q Design parts. By binning their most power efficient chips and creating additional design rules around them, NVIDIA and its partners have been able to put together a whole category of thin and light laptops that, while TDP constrained, still offer solid performance – and which can be sold at a greater margin over laptops with higher TDP parts. So with the market for this style of thin and light laptops growing at nearly 3x the rate of the overall gaming laptop market, it makes a lot of sense for AMD to get a finger or two in it as well.

That said, AMD’s ambitions are a bit narrower/more focused than NVIDIA’s high efficiency parts. For starters, AMD is focusing on just 1080p gaming here. All 3 of the 6000S series parts – 6800S, 67800S, and 6600S – will be promoted on the basis of their 1080p gaming performance. Either being able to put out 100fps (or better) with max quality graphics at the high end, hitting the same framerates at high quality settings for the mid-end part, or still hitting 80fps at high quality graphics at the low end.

And since 1080p has been the domain of Navi 23, it’s none too surprising to see that AMD is apparently using that GPU for all three SKUs here. What we’re essentially looking at is a sub-stack of parts where clockspeeds and TDPs increase as you get higher into the stack. This limits the performance of the series to whatever a top Navi 23 configuration can do, but I can only imagine that it helps to simplify the design side of matters for AMD’s partners; no matter the SKU, it’s still the same physical chip and memory configuration.

All told then, we’re looking at three parts. The 6800S has a reference TGP of 100W, and while we’re waiting on AMD to officially disclose the CU count and clockspeeds, I expect it will be at or close to 32 CUs (Navi 23’s native configuration) with perhaps slightly more modest clockspeeds than what we’ve seen on the top 6600M laptops. Notably, this does mean that there’s a bit of fracturing here in terms of names versus the GPU used; whereas 6800M is a Navi 22 chip, 6800S will be a Navi 23 chip.

This is followed by the Radeon RX 6700S and 6600S. We’re waiting on the full details of these parts as well, but AMD’s reference TGPs are 80W and 65W respectively. So we’re expecting them to have lower clockspeeds and possibly fewer CUs in line with those power limits.

We’re also waiting on confirmation from AMD on memory clockspeeds. But given the premium nature of the lineup, we’re expecting some (if not all) of these parts to get 16Gbps GDDR6 in order to ensure that they’re kept well-fed.

Past that, these new SKUs are based on the same Navi 23/RDNA2 architecture we all know and love. So there are no new end-user features to speak of, or other relevant high-level specification changes. And surprisingly, even with the focus on thin and light laptops, according to AMD the chip packaging hasn’t been changed for the 6000S series; so AMD isn’t doing anything to further reduce the Z-height of their chips.

The second group of mobile graphics announcements coming out of AMD involve the addition of 3 more Radeon RX 6800M/6600M SKUs. At just over 6 months since they initially introduced their current-generation mobile parts, AMD is expanding the family with some additional SKUs based on their existing Navi 22 and Navi 23 GPUs. These new parts all carry a 50-class designation, and are essentially higher-clocked/higher-configured versions of their existing mobile counterparts. 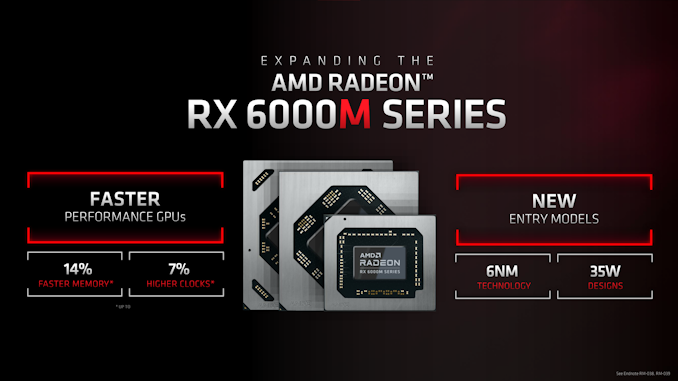 Starting at the top, we have AMD’s new flagship Radeon mobile part, the Radeon RX 6850M XT. This is a 6800M that has been clocked another 7% higher, raising its game clock from 2300MHz to 2460MHz. As the 6800M was already a fully-enabled Navi 22 part, there are no other meaningful changes to speak of here; it’s still 40 CUs and paired with 16Gbps GDDR6 on a 192-bit memory bus.

The other two 6x50M parts are part of the 6600M family. These are the Radeon RX 6650M and 6650M XT. Both of these are enhanced versions of the original 6600M, based around the same Navi 23 chip, but with better specifications.

We’re still waiting on AMD to announce the official clockspeeds and CU configurations here, but at a minimum, both parts are getting faster memory clocks. Whereas the original 6600M shipped with 14Gbps memory, the 6650M parts get 16Gbps memory, which amounts to a 14% increase in memory bandwidth. AMD has not published much in the way of performance figures here, but in the case of the 6650M they are touting performance 20% better than the 6600M. Memory speed increases alone aren’t enough to account for this, so the 6650M XT is also getting some kind of GPU clockspeed or CU count increase to unlock further performance from the Navi 23 GPU.

Otherwise, these new parts are exactly what they say on the tin: new SKUs based on and designed to fit into AMD’s existing Radeon RX 6000M series lineup. So there are no other configuration or feature changes to speak of.

Like the new Radeon RX 6000S series, the RX 6x50M parts are expected to become available in laptops in the first quarter of this year.

Last and technically the least, AMD is also introducing a pair of new entry-level SKUs, the Radeon RX 6500M and Radeon RX 6300M. These parts are both based on the new Navi 24 GPU, and mark the only products being introduced today that are actually based on new silicon. 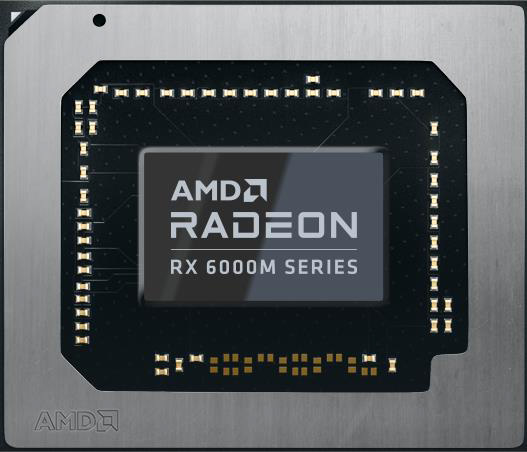 Like its Navi 14 predecessor, Navi 24 is the fourth and seemingly final member of AMD’s Navi 2x GPU stack, and is aimed at the low-end/entry-level segment of the market. The smallest of the Navi GPUs has seen AMD once again take a scalpel to the Navi 2x architecture, essentially cutting Navi 23 in half to deliver a part with half of the CUs, half of the memory bus, and half of the power consumption.

But as an added kicker, AMD isn’t reusing TSMC’s 7nm process for Navi 24. Instead, the smallest of the Navi chips is being made on a 6nm manufacturing node, which we presume to be TSMC’s N6 line. This marks the second AMD GPU/accelerator we’ve seen made on 6nm – after the gigantic CDNA2 chip in the Radeon Instinct MI250X – so AMD is taking full advantage of their close working relationship with TSMC, and in turn taking advantage of the benefits offered by what’s essentially a further refined version of TSMC’s 7nm process. The switch to N6 likely isn’t adding much in the way of performance for AMD, but the roughly 15% improvement in transistor density will enable AMD to get that many more dies out of every wafer at a time when fab capacity is at a premium.

To that end, while AMD hasn’t released the official transistor counts or a die size for Navi 24, expect it to be very small, especially compared to the sizable Navi chips AMD has put out thus far.

Along with cutting down the number of CUs, another big area of transistor/die space savings for AMD on Navi 24 will come from a further reduction of the size of the Infinity Cache. That on-die SRAM cache is just 16MB for Navi 24, half the size of the cache on Navi 23 (6600M). Given that Navi 23 was already the sweet spot for 1080p gaming, I’m very curious to see how Navi 24 fares in this fashion; is 16MB going to be a large enough cache for entry-level gaming? For reference, a 32-bit 1080p frame buffer is just under 8MB in size, so it’s not going to take too much to fill a 16MB cache.

In any case, Navi 24 will be used as the basis for two more Radeon RX 6000M SKUs, the 6500M and 6300M. Like the rest of AMD’s mobile laptop GPU lineup, we’re still waiting on detailed specifications for some areas. But at a high level we’re looking at 16 (or fewer) CUs paired with 4GB of GDDR6 on a 64-bit memory bus. AMD isn’t talking performance expectations here, but at a bit over half of a 6600M in size, the 6500M delivering a bit over half of the former’s performance is a good place to start.

The more interesting development is arguably on the TDP front; the 6500M/6300M are AMD’s first sub-60W parts in over two generations; AMD hasn’t been able to offer parts at those power levels since the Polaris era. Officially, AMD is calling these 35W designs, which would make them comparable to NVIDIA’s MX series of entry level laptop GPUs, and put them at a bit over half the power consumption of a low-power 6600M configuration. Fittingly, this is what AMD is comparing their performance to, pitting the 6500M versus the last-generation MX450.

As with NVIDIA’s 35W parts, I wouldn’t be surprised to see the 6500M/6300M show up in a mix of low-cost and low-power designs. As entry-level parts, their place in the price/performance spectrum is rather straightforward, making them the cheapest mobile GPUs AMD offers. Meanwhile for ultralight laptop designs that can’t power or cool a larger 50W+ design, a 35W chip is still going to be a step up from integrated graphics.

Wrapping things up, like the rest of AMD’s updated mobile graphics stack, expect to see laptops with the RX 6500M and 6300M show up in the first quarter of this year.