One of the more interesting elements in Intel’s 2020 set of disclosures was its 10nm Tremont Atom core. Initially used in the low power Lakefield product, this core design is super interesting due to its dual decoder design, which no other x86 core does. It has been over a year since the launch of Lakefield, and we’ve been hoping for a friendlier platform on which to test these new cores, along with some extra frequency to see the design stretch its legs. That platform is launching today, with Intel’s newest Pentium Silver and Celeron Processors.

The new Pentium Silver and Celeron processors are aimed initially at the education market, and Chromebooks, but will slowly expand into Linux and Windows variants over time. Intel detailed that the laptop market was priority over the mini-PC market, however other form factors are free to be developed. These new processors will follow the same schema as Atom-based Pentium and Celeron processors in the past, with quad-core and dual-core variants on offer. Intel has detailed six processors in total, three each at the 10W and 6W levels.

All the processors will feature 1.5 MB of inclusive shared L2 cache, as Tremont is built around quad-core modules sharing an L2 cache – in this instance the dual-core variants simply have two cores disabled, but full access to the L2 cache. There is also 4 MB of non-inclusive shared L3 cache, which is a sizeable cache for an entry-level processor.

You can read the deep dive into the Tremont microarchitecture here.

All the CPUs support dual channel DDR4-2933, as well as LPDDR4X-2933, which is an odd combination as usually the LPDDR4X transfer rate is higher, such as LPDDR4X-3600. Graphics is provided by Intel’s UHD design, however it isn’t stated if this is Gen or Xe graphics, nor how many EUs these parts have. Through the stack we see a turbo frequency of 3.3 GHz, but Intel doesn’t specify base frequencies. In the footnotes, it does state that the turbo power is 20 W for the 6 W variants.

*Update: Intel's own specifications site, ARK, is now listing the base frequencies. We also have been told that the graphics are Gen11, not Xe. 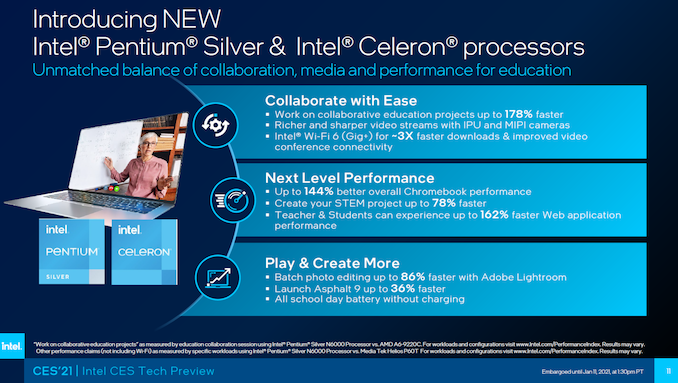 A new features coming to these processors is Intel’s Image Processing Unit, or IPU, which when paired with a MIPI interface can enable accelerated compute for video calls and techniques, such as blurred backgrounds. Coupled with Wi-Fi 6 support (via additional RF), and the goal here is to provide a machine that can enable an education type workload.

The initial devices with these processors will be Chromebooks, which Intel compares itself favourably to AMD's A6-9220C, and MediaTek’s Helios P60T. Intel states a 35% generational improvement over Gemini Lake, and 144% better Chromebook performance (using PT’s CrXPRT benchmark) over the competition. Intel expects these devices to be in the market in Q1. Linux and Windows based devices are expected in Q2. Intel states that it will have 170 Chromebook designs in 2021, of which these processors will form a part of that mix.