Further expanding its ever-growing list of CPU coolers, Deepcool has announced its new Castle 280EX AIO CPU cooler, a closed loop liquid cooler with a 280 mm radiator. Slotting in between the pre-existing Castle 240EX and 360EX, the 280EX is designed to improve options for users looking for an RGB-infused cooler with a grey cylindrical CPU block.

The Deepcool Castle EX series is designed with a 3-phase motor intended to improve flow rate and overall cooling performance, but with less operating noise. The latest in the Castle EX range is the 280EX, which uses a 280 mm radiator that's paired with a black sprayed aluminium core, and comes supplied with a pair of 140 mm 400-1600 rpm cooling fans. The new cooler supports all the usual socket types, including Intel's LGA20XX, LGA 1200 and LGA 115x sockets, as well as AMD's TRX40/TR4 and AM4 sockets. 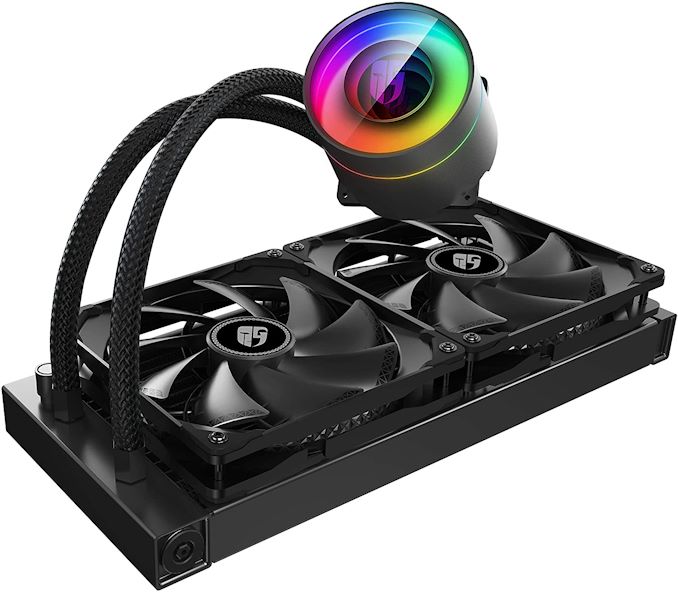 One of the Deepcool Castle 280EX's main design traits comes via the CPU block and pump, with a swappable logo plate which allows users to choose between Deepcool's Gamerstorm emblem or a ying-yang symbol. Integrated into the rather bulky looking pump and block is some addressable RGB LED lighting which can be customized through a 3-pin ARGB motherboard header, or with an included RGB controller in the accessories bundle.

The cooling plate is made from copper for effective heat dissipation, and Deepcool has opted for a larger design with 25% more skived fins, although Deepcool doesn't state which model it is using as a comparison. The larger plate allows better support for the sizable AMD TR4 socket, which has a much larger IHS than smaller processors such as the AMD's Ryzen 3000 series.

The Deepcool Castle 280EX has an MSRP of $150 and is currently available to buy at Amazon. For reference, the larger Castle 360EX is presently available for $158, while the smallest of the now completed trio, the 240EX with 240 mm radiator can be purchased for $130.