While this past week's wave of new laptop announcements was focused squarely around the launch of Intel's 10th gen Comet Lake-H mobile processors, a couple of vendors have also been using the occasion to update their 15 Watt U-series laptops as well. Among these was HP, who has updated its Envy 17 family of notebooks. Joining the existing Comet Lake models, the HP Envy 17 series now also features models with Intel's Ice Lake-U processors, with various configurations available up to Intel's Core i7-1065G7 CPU.

Designed for professional users looking for a sleek and stylish design, the updated HP Envy 17s include multiple models across its range, with a customizable touch screen model in its arsenal. (17t-cg000 Touch). The new HP Envy 17 can be fully configured to a suitable specification dependent on the user's requirements, with multiple memory, CPU, graphics, and storage options available. Users can also equip it with a standard Intel AC9560 Gigabit Wi-Fi wireless adapter, or with an Intel AX201 Wi-Fi 6 adapter. A larger 55 Wh Li-ion Polymer battery is included, with its weight starting at 6.02 lb, dependent on the chosen configuration.

Starting off with displays, the latest-generation Envy 17 features a 17.3" IPS backlit WLED display, with options for either a 1080p or 4K display. Both displays are rated for similar performance, with a screen brightness of around 300 nits. HP is also offering optional touchscreen functionality on some models, though only with the 1080p display. Overall, the HP Envy 17 weighs around 6 lb and has dimensions of 15.71 (W) x 10.20 (D) 0.76 (H) inches.

Under the hood, the HP Envy 17 is powered by a Intel's Core i5 and Core i7 Ice Lake processors. Curiously, HP is taking a very binary route here: the only CPU options are the slowest Core i5, the i5-1035G1, or the fastest i7, the i7-1065G7. Both processor options offer 4 CPU cores, but along with clockspeed differences, the i5's integrated GPU is only half as powerful as the i7's. Perhaps that's why HP is also including a discrete GPU with all of the Envy 17s, using NVIDIA's GeForce MX330, which comes with either 2GB or 4GB of GDDR5 memory. 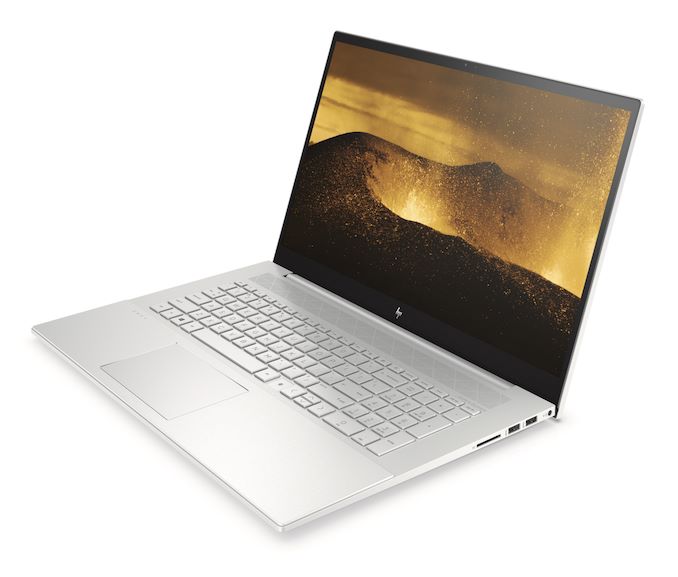 Meanwhile storage options inside  the silver sandblasted anodized aluminum frame run the full gamut, from Optane-cached rotating rust all the way up to a 1TB PCIe SSD. All models come with some form of solid state storage, starting with a 1TB HDD and 16GB of Optane Memory at the low end, as well as other combinations of HDDs, SSDs, and Optane Memory including a 512GB PCIe SSD with a 32GB Optane cache. As for the memory, HP offers between 8GB and 32GB of DDR4-3200 SDRAM, including a curious 12 GB configuration with one 8 GB stick and one 4 GB stick in an unbalanced dual-channel mode.

Also included in the HP Envy 17 is either an Intel AC9560 Wi-Fi 5 adapter, or one of Intel's newer AX201 Wi-Fi 6 wireless adapter. For connectivity, the laptop offers a USB 3.2 G2 10 Gbps Type-C port, with support for DisplayPort 1.4, as well as three USB 3.1 G1 Type-A ports, an AC Smart pin, and a headphone and microphone combo port. For users with HDMI, the HP Envy 17 also has a single HDMI 2.0 video output. Meanwhile, along the top of the bezel is a wide vision HD webcam with a built-in microphone, with the Envy 17's sound coming from a pair of integrated Bang & Olufsen speakers.

Every model in the new HP Envy 17 Intel 10th Generation refresh comes equipped with a 65 W AC adaptor, a multi-media SD Card Reader. The price of each model varies, with prices for the BTO models starting at $950 and ranging up to $2070 for the top-spec model, while the pre-configured 17-cg0013dx SKU for Best Buy is available for pre-order at $1250.