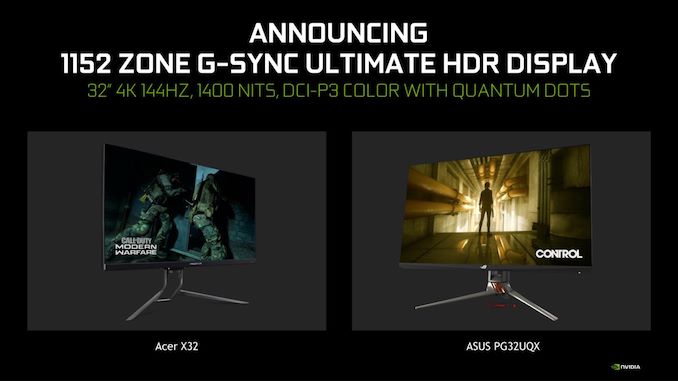 Following yesterday’s announcement of the first 360Hz G-Sync monitor, the ASUS ROG Swift 360, this morning NVIDIA is announcing some updates in the high-end HDR portion of the market as well.

Kicking things off, NVIDIA is using CES 2020 to once again drum up interest in G-Sync Ultimate (HDR) monitors, this time by announcing a pair of new 32-inch 4K monitors with Mini-LED backlighting. For those keeping track, this is the second set of Mini-LED-based monitors that the company has announced; NVIDIA first unveiled 27-inch monitors back at Computex 2019 for Acer and ASUS, though those monitors have yet to ship.

Besides being the first G-Sync Ultimate monitors available in a 32-inch panel size, the new 32-inch models’ claim to fame is an 1152 zone backlighting system, which is the largest number of zones announced for an LCD monitor to date. According to NVIDIA, the forthcoming Acer X32 and the ASUS PG32UQX will be able to offer a peak brightness of 1400 nits, with the finer-grained Mini-LED FALD backlighting providing better local contrast and reduced backlight blooming. Otherwise these new monitors are fairly similar to the current-generation 27-inch models, offering a 3840x2160 resolution with a maximum refresh rate of 144Hz (with 4:2:2 chroma subsampling).

Increasingly typical for CES monitor announcements, NVIIDA isn’t offering any guidance on when these monitors will be available.; for now, they’re works in progress. As mentioned earlier, we’re still waiting on last year’s 576 zone 27-inch monitors, the ASUS PG27UQX and its Acer equivalent, to start shipping. We haven’t heard anything about those monitors since Computex, so we’ll be poking NVIDIA about those as well.

Meanwhile in the high-end TV space, NVIDIA is announcing that they have already certified LG’s new 2020 OLED TVs as G-Sync Compatible. This follows last year’s certification of the E9, C9, and B9 series of TVs, all of which received HDMI-VRR variable refresh support, and were later certified by NVIDIA once their G-Sync Compatible certification program launched. As was the case with last year’s monitors, NVIDIA’s certification means that they meet the company’s standards for image stability (e.g. no artifacting or flickering), and that HDR gaming works as well. All told, NVIDIA says that 12 OLED monitors are being certified, though ahead of LG’s own announcement they aren’t specifying model numbers. 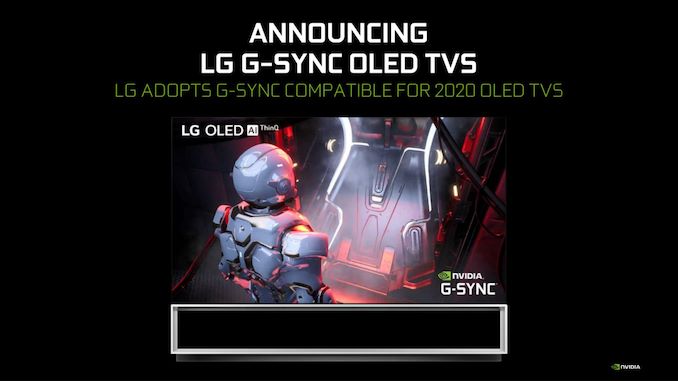 LG of course remains the player to beat in the TV space as far as most gamers are concerned. Their WOLED-based TVs have developed a (well earned) reputation for both low input latency and for HDR image quality, the latter a product of individually addressable OLED subpixels. And while LG and NVIDIA are not close partners in the way NVIDA and their PC monitor partners are – today’s announcement is basically just certifying a setup built on top of industry standards – it’s none the less important for NVIDIA, since LG all but has a lock on the high-end market for gaming TVs.