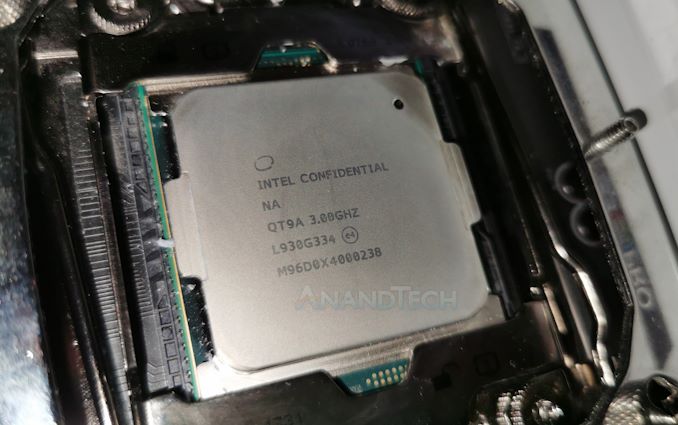 The most profitable process node in the history of Intel has been its 14nm process. Since 2014, the company has been pumping out CPUs built on a variety of configurations of 14nm – slowly optimizing for power and frequency. We used to call these variants 14+ and 14++, but as the next process node isn’t yet ready, rather than draw attention to a soon-to-be 6-year old process, Intel just calls it all ‘14nm class’. The latest launch on 14nm is Intel’s new Cascade Lake-X processors: high-end desktop hardware that gives a slight frequency improvement over Skylake-X from 2017 but it also has the first round of hardware mitigations. Today we’re testing the best CPU of the new list, the Core i9-10980XE.

The Ups and Downs of Intel’s High-End Strategy

Way back in June 2017, Intel first launched its Skylake-X high-end desktop processors. The Core i7-7900X was a 10-core processor built using the smallest silicon die from Intel’s enterprise processor range. It was on sale for $999, a noticeable drop from the $1729 pricing of the 10-core in the previous generation, and fit into a market where AMD had just started to launch its 8-core Ryzen processors for half this price. The benefits over AMD at the time, as explained in our review, came down to new vector extensions, more PCIe lanes, more memory channels, and a higher rate of instruction throughput, all equating to more performance – if the cost didn’t frighten you away.

AMD quickly launched 16-core processors and then 32-core processors into the high-end desktop market, turning most of the areas in which Intel had been winning into wins for AMD. The 16-core 1950X/2950X and the 32-core 2990WX were able to stifle the usefulness of Intel’s 10-core offerings by being much more competitively priced. In response, Intel moved up another step in its enterprise CPU silicon, and started offering up to 18 cores to the high-end desktop market, first with the Core i9-7980XE at $1979, and then the Core i9-9980XE at the same price but with a small clock increase.

For 2019, both companies have kicked it up a gear. AMD now offers for its mainstream platform 16 cores built on TSMC’s 7nm process with the Ryzen 9 3950X, which has a recommended price of $749. It also has a fundamental performance per clock advantage, as well as a higher frequency than Intel's HEDT parts. This now means that Intel’s 18-core CPU, at $1979, competes against AMD’s 16-core CPU at half the price and with better efficiency.

In order to be competitive, Intel is doing the only thing it can do, based on what it has in its arsenal: the new 18-core Core i9-10980XE that comes out today is going to have a tray price of $979. The new Cascade Lake-X processor, based on the same silicon as Intel's already-launched Cascade Lake generation of Xeon processors,  comes with many of the same features introduced for those parts. In particular, this means the new Intel HEDT chips come with hardware protections for the first round of Spectre/Meltdown security patches. Intel is launching a range of processors, from 10-core all the way up to 18-core. 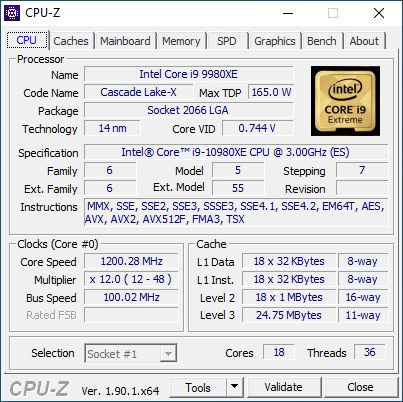 If we compare the top parts from AMD and Intel, we get an interesting differential.

What we have here are two processors that are technically in different markets: AMD is making the ‘high-end desktop market’ for its processors go beyond $749, while Intel’s HEDT market is now from $569 to $979. This means that Intel does have an advantage in this price range for memory controllers and PCIe lanes. It is worth noting that Intel is not launching a 16-core processor in this family, to compete directly with AMD’s 16-core. The official reason is that Intel doesn’t see a need to insert a product between the 10940X and the 10980XE in that price range; however as most people have gathered, not having a direct competition product on core count saves Intel some expected embarrassment in performance comparisons.

With that being said, AMD is also launching its newest HEDT processors today as well. The AMD Threadripper 3960X (24-core) and AMD Ryzen Threadripper 3970X (32-core) are (just) derivative designs of their enterprise processors, but signify that Intel has nothing to compete in this 24-core and above space.

If we put up a price list for the updated product families, it shows the following:

Keep an eye on all our benchmarks, just to see where everyone ends up.