This afternoon, NVIDIA released their financial results for the fourth quarter of their 2016 fiscal year, and the company had not only a record quarter, but also a record year. Revenue for quarter was $1.401 billion, up 7% from last quarter and 12% from the same point last year. Margins were strong, with a 60 basis point gain to 56.5%. Operating income for Q4 was $252 million and net income was $207 million, up 9% and 7% respectively. This resulted in earnings per share of $0.35, which despite all the good news in the previous numbers, was actually flat year-over-year.

NVIDIA also released Non-GAAP results which exclude “stock-based compensation, product warranty charge, acquisition-related costs, restructuring and other charges, gains and losses from non-affiliated investments, interest expense related to amortization of debt discount, and the associated tax impact of these items, where applicable”. On a Non-GAAP basis compared to Q4 2015, gross margin was up 100 basis points to 57.2%, operating income was up 26% to $356 million, net income was up 23% to $297 million, and earnings per share were up 21% to $0.52.

Much of the growth of NVIDIA was due to their recent successes with GPUs for gaming, professional visualization, and data center, but they’ve also seen some tremendous growth in Tegra in the automotive space, but at the same time they’ve seen very poor results in Tegra in the mobile arena.

GPU sales is still by far the largest part of NVIDIA, and they had GPU revenues of $1.18 billion, which is up 10% from a year ago. GeForce branded GPUs grew 21% in the same time frame. Quadro branded cards were up 7% year-over-year to $203 million. Datacenter GPUs, which include but Tesla and GRID, had revenues up $97 million, up 10% from Q4 2015.

NVIDIA’s “Other” category is where they stick their $66 million that they get from Intel which is licensing for NVIDIA technology based on a settlement agreement the two parties made in January 2011. Intel would have made its final payment for this settlement in January 2016 though, so we’ll see how that changes NVIDIA’s results going forward. 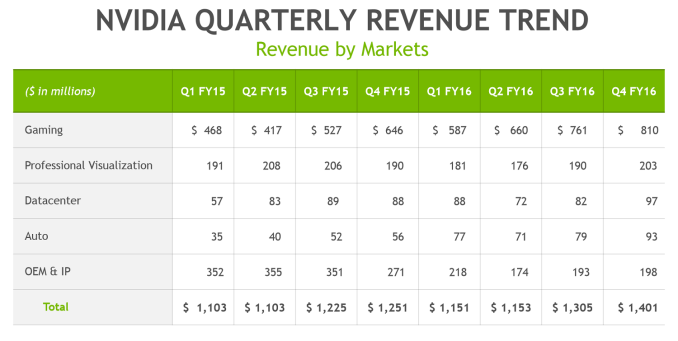 For the quarter, NVIDIA paid $62 million in cash dividends and repurchased 4.3 million shares, and for the full fiscal year 2016, NVIDIA returned $800 million to investors through these two mechanisms. For FY 2017, NVIDIA intends to return $1.0 billion. The next dividend payout will be $0.115 per share on March 23, to all shareholders of record as of March 2.

NVIDIA’s Fiscal Year 2016 was certainly very strong, although large warranty claims of the SHIELD tablets, along with restructuring fees, have hurt their GAAP numbers somewhat. I’m very curious to see how they do now that the Intel payout is complete, although it may be averaged out on the books for FY 2017 still.