The Impact of Disruptive Technologies on the Professional Storage Market

It is not a secret that even though a SAN comes with all the virtues of centralized data, network storage comes with a network bandwidth and latency penalty. By simply attaching a flash array directly to a system (DAS), we can measure the extra latency compared to SAN (Storage Area Network). It amounts to between 0.3 and 0.8 ms depending on whether you use Fibre Channel or iSCSI over copper wires. 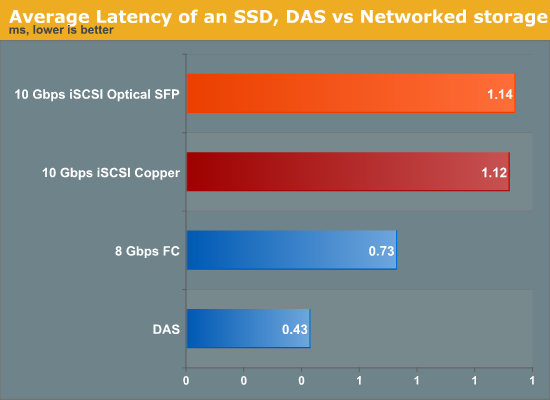 Nutanix believes that virtualized servers should use local storage, clustered together in a virtual storage pool. Each of the virtual machines connects to a storage VM. That storage VM is typically an iSCSI target inside a VM, also called a VSA or Virtual Storage Appliance. The VSA on each server node are clustered together by the Nutanix Distributed File System (NDFS). NDFS makes sure that if one node dies, the other nodes are still able to access the necessary files to run.

The VSA also leverages the latest flash technology. The most accessed data is on a Fusion-IO or Intel S3700 SSDs, depending on the Nutanix node model. The “colder” (not frequently accessed) data is automatically transferred to the SATA terabyte disks. It's basically another level of caching, only with larger data caches than we see in the desktop world. 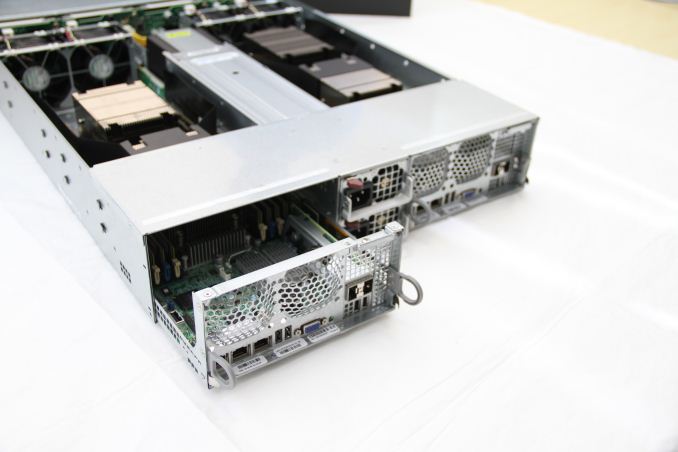 Using what seems to be a Supermicro Twin or Twin² chassis, even an entry level four node Nutanxi NX-3050 should support up to 400 virtual desktops with a power consumption of about 1.1 KW. Compare this with your typical SAN array that typically needs 700W just for one midrange array, and you probably need several expansion modules before you can even think about supporting 400 virtual desktops.

Unfortunately, we cannot verify the claims of Nutanix right now, but our experience tells us that from a power and performance point of view it will be very hard for the typical "server plus SAN infrastructure" to beat the much simpler “integrate everything inside a dense server” platform. The only disadvantage is that the number of DIMM slots inside such server nodes is limited. That is why even the largest Nutanix hosts do not support more than 256GB per node, which might be a limitation in some virtualization environments. 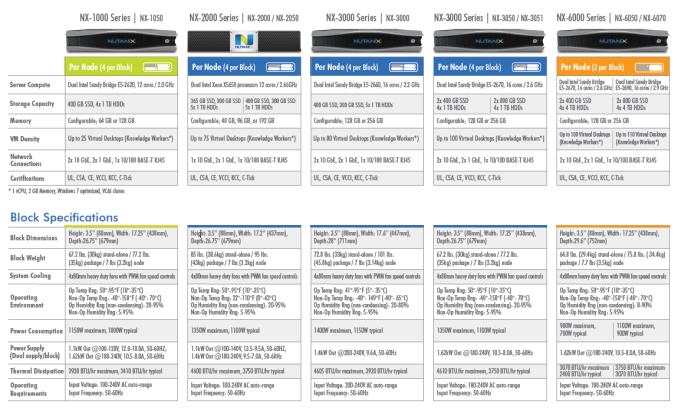 Starting at $22000 per node, the Nutanix nodes are hardly cheap, but since you don’t need a SAN the total investment is a lot lower than the traditional approach, especially for virtual desktops. Nutanix seems to have convinced quite a few people as it claims it is the fastest growing IT infrastructure startup ever, with an $80 million annual run rate. Now they just need to prove they have the reliability and support infrastructure to win over additional customers.