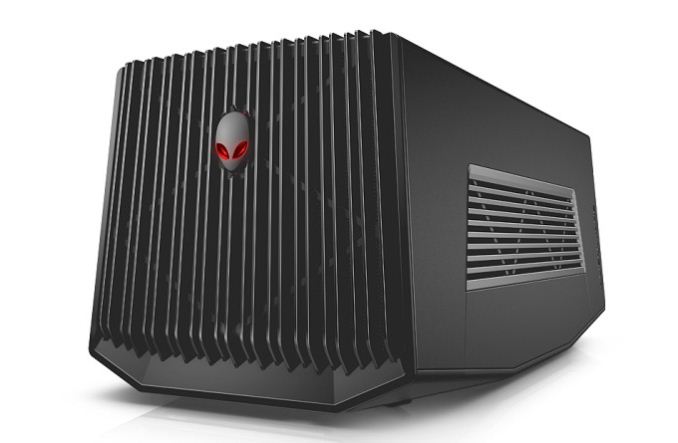 The idea of an external PCI-Express chassis for video cards is practically as old as PCI-Express itself. However over the years the idea has failed to reach the consumer market as a complete product, even with the introduction of standardized external PCIe interfaces such as Thunderbolt. Various prototypes have been shown, but in practice the only way to acquire such a rig has been to build it yourself, combining an ExpressCard slot and its pokey PCIe 2.0 x1 link with an external PCIe chassis.

Thankfully it looks like the PC industry is finally going to turn the corner on the concept thanks to Alienware. Today Alienware is introducing their own PCIe video card chassis, the Alienware Graphics Amplifier.

Alienware’s amplifier is a fairly typical take on the concept – there are only so many ways to build an external PCIe chassis – however Alienware has been able to put together something that is clearly tuned for video cards. The chassis itself houses a PSU and a single x16 PCIe slot for a video card, along with a quartet of USB 3.0 ports for any other I/O needs. Notably, Alienware has designed the amplifier to be able to handle double-wide video cards up to 375W, which is quite a bit more power than professional grade external PCIe chassis, and this means it can conceivably run just about any self-contained video card on the market. That said, like many small form factor computers the amplifier is also clearly designed for video cards with fully exhausting blowers, so it’s going to be best paired with reference model video cards since blowers are nearly non-existent in custom cards these days. 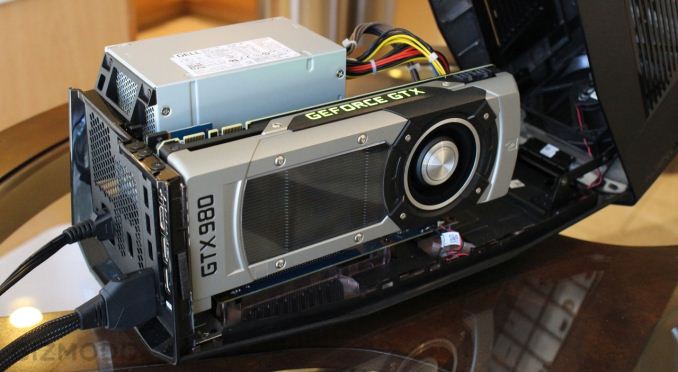 More interesting perhaps is the PCIe interface, which up until now has always been the sticking point in getting a video card chassis to market. The good news is that Alienware has more or less solved the problem, but the bad news is that the interface is a proprietary Alienware/Dell design that is only available on their laptops. Alienware notes that the interface is actually a PCIe + USB interface – apparently carrying USB over from the host rather than using PCIe to power a separate controller – and in the meantime we’re still working to determine just how many PCIe lanes the interface is carrying. Even if it’s not a full 8 lanes (the Haswell U series CPUs don’t support 16 lanes), given the severe bandwidth limitations of ExpressCard and Thunderbolt, even a 4 lane setup would represent a significant improvement in bandwidth. Like Thunderbolt however this interface does appear to use active cabling (it would be very difficult to carry that much bandwidth externally without it), in which case the cable is going to be an expensive part of the entire setup.

On the host side, the amplifier is being launched alongside the Alienware 13, which will be the first of what will presumably be a series of Alienware laptops to support the amplifier’s interface. Rather than hanging off of spare PCIe lanes, we suspect some kind of MUX is in play here, as Alienware has noted that the 13’s internal dGPU (a GeForce 860M) has to be shut off to use the amplifier interface. Most likely Alienware is rerouting the GPU’s lanes to the interface when it’s in use. Activating or deactivating the interface does require a reboot, which although not especially convenient bypasses some very messy issues that could occur when hot-plugging an active GPU, and we suspect would otherwise be a show-stopper. 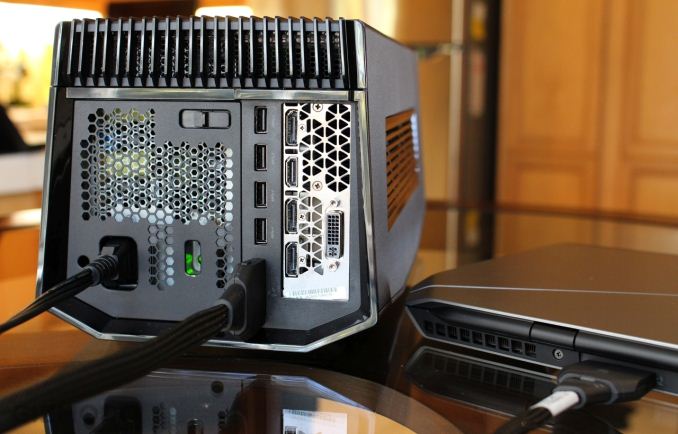 Meanwhile it’s interesting to note that in their development process Alienware has been able to solve some of the technical issues around an external video card in the process to better integrate it with the host. The video card in an amplifier can be used to drive both external and internal displays, meaning that it’s possible to use the amplifier to drive the 13’s built-in display and still reap the benefits, even without an external monitor. The overall non-portability of the 7lb+ amplifier and the USB ports strongly drives the amplifier towards being used as a docking station with an external monitor, but if you want to use it to drive the internal display that is going to be a viable option.

Moving on, Alienware is taking a vendor agnostic approach with the amplifier and will be supporting NVIDIA as well as AMD GPUs. There are still some additional technical details we’re chasing down on how this will work with the internal display capabilities, but ultimately it means the amplifier can be used with a wide range of cards from both vendors. That said, since the amplifier is going to be best paired with a blower type video card, NVIDIA’s cards are going to be the more natural fit at this time. Alienware has been showing the amplifier off with the GTX 980, and next to being the most powerful single-GPU video card on the market it also has a reference blower that is an excellent match for the amplifier’s cooling capabilities.

Finally and perhaps most importantly, Alienware has made it clear that the amplifier isn’t a prototype and won’t be vaporware, and that we’re looking at an external video card chassis that is actually going to ship. Alienware will begin taking orders for the amplifier today alongside the Alienware 13 laptop, with the hardware shipping in November. Even the price is decent (especially compared to DIY attempts), with the amplifier set to cost $299. This is on top of the price of the Alienware 13 laptop and the video card to fill the amplifier with, so the total cost of a setup is still going to be significant, but despite being the first shipping consumer solution it’s not priced through the roof.