One of the companies that comes to CES with no shortage of new product announcements is ASUS, who has fingers in many pies across a large spectrum of the different kinds of PC hardware and peripherals. To that end, ASUS has unveiled two new ROG gaming monitors for those looking for large screens, the 48" ROG Swift OLED PG48UQ and the 42" ROG Swift OLED PG42UQ. Both models feature impressive specifications, including 3840 x 2160 (4K) resolutions, 120 Hz refresh rates, and ultra-fast 0.1 ms GTG response times. 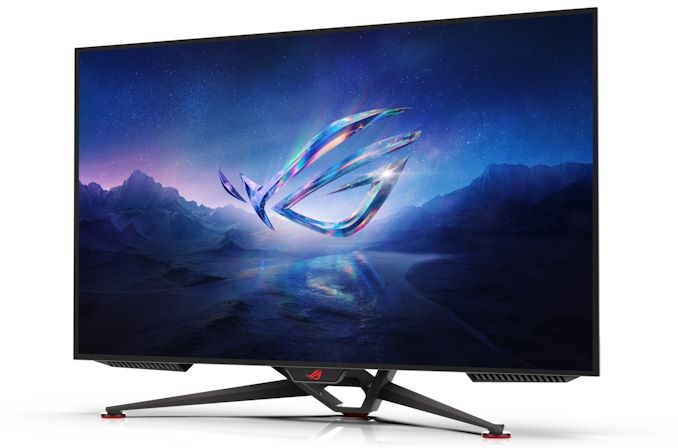 Both the ASUS ROG Swift OLED PG48UQ and PG42UQ feature identical specifications other than the overall size of the screen. These include an OLED panel with an anti-glare and micro-texture coating and a 16:9 aspect ratio with supported resolutions of up to 3840 x 2160. Looking at the finer specifications, ASUS lists a response time of 0.1 ms GTG (gray to gray), with a fast 120 Hz refresh rate. Other specifications include true 10-bit color depth with 98% DCI-P3 calibrated from the factory. ASUS also advertises a contrast ratio of 1,000,000:1 and has both VRR technology and ALLM modes for console gamers.

Focusing on the I/O, both monitors include two HDMI 2.1, two HDMI 2.0, and one DisplayPort 1.4 video input, as well as a USB hub and two 3.5 mm audio jacks consisting of a line out and earphone jack. Regarding the USB hub, ASUS hasn't specified what port type, the generations how many USB ports there are at this time.

At the time of writing, ASUS hasn't specified when the ROG Swift OLED PG48UQ or PG42UQ will hit retail or how much they might cost.