At first sight, the Lobera Supreme looks like it is made out of metal. It has a black body that imitates brushed aluminum, a short palm rest that looks like an anti-slip metal sheet and four sizable screws at each corner of the chassis. Unfortunately for those that had hoped this to be a metallic keyboard, it is an illusion - the keyboard is plastic and even the four visible screws are decorative, with no impact on the mechanical cohesion of the keyboard. If you do want a metallic chassis for whatever reason, Tesoro also markets the Colada, which is virtually identical to the Lobera Supreme but with a metallic chassis instead. 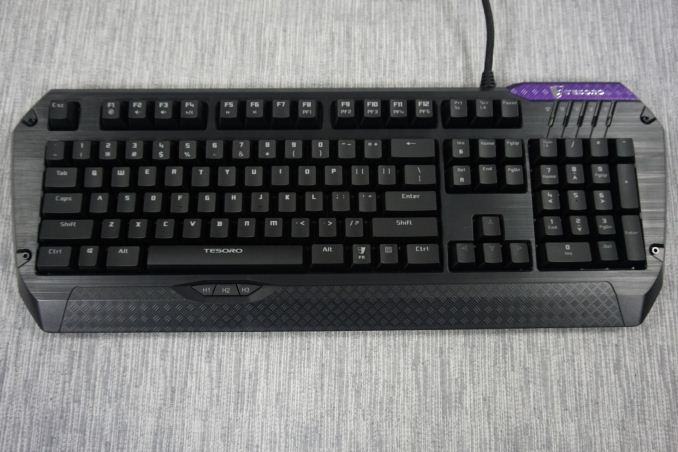 With the exception of three thumb keys beneath the Space Bar, the Lobera Supreme sticks to the typical 104-key QWERTY layout. The US layout is depicted in this capsule review but the company has other versions available as well. The characters on the keycaps are large, bold and laser-etched. Metallic brace supports have been placed under the larger keys, which are not as good as cross-type supports. This makes the large keys a bit wobbly but not to an worrisome extent. 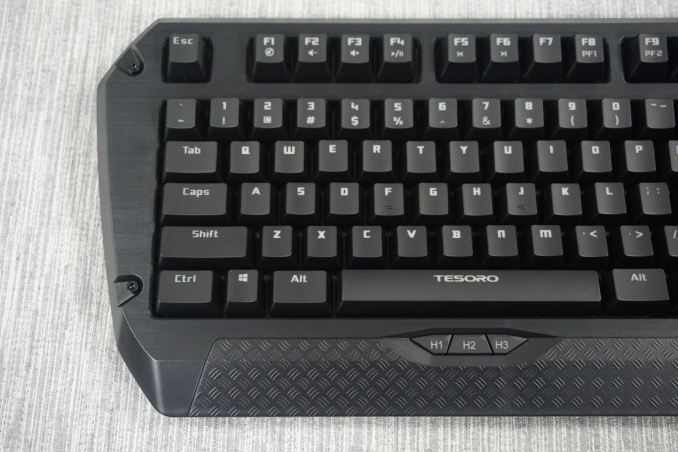 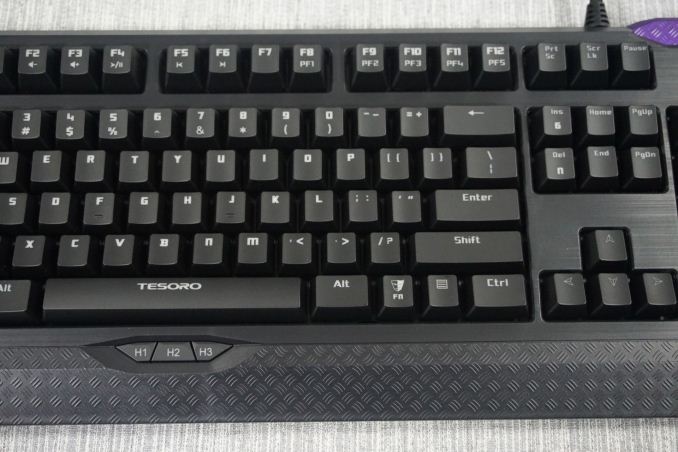 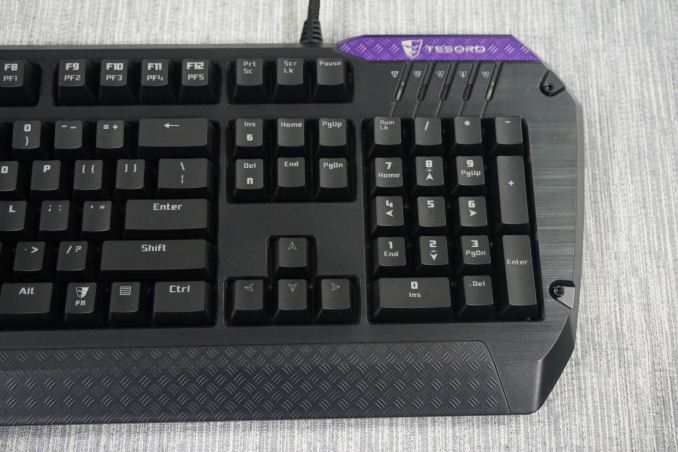 A small purple area at the top right side of the keyboard is where the USB hub and the headphone jacks are. Note that the USB ports are very weak, capable of powering devices with a current of up to 100mA maximum. This limits their use to very low power devices only, such as wireless receivers. A DC-in jack is available and, with the use of the supplied USB cable, it can provide extra power to the USB ports. The USB cable can be connected to a port of the computer or to an external AC to USB adapter. It is very strange that Tesoro went with the messy solution of an extra cable when they could have installed a dual USB cable as most other companies do. 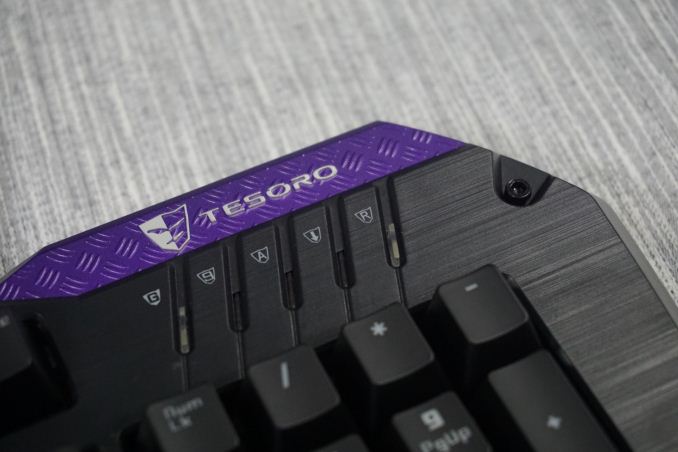 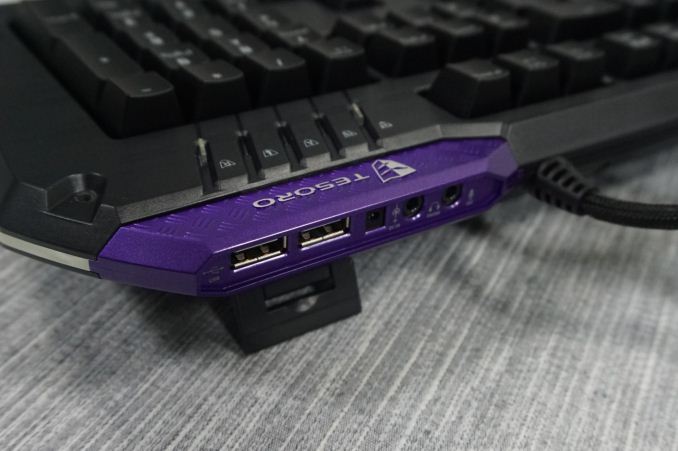 There are little of interest beneath the keyboard, with the exception of the tilt feet. Tesoro installed two feet at each side of the keyboard, allowing two tilt settings for those that prefer a mild or a steeper angle. 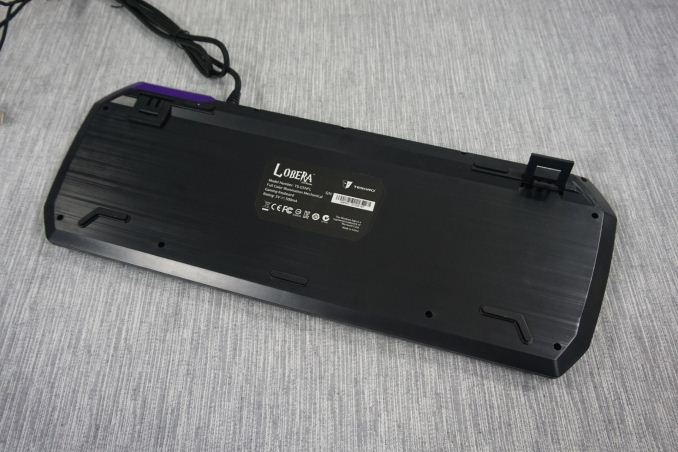 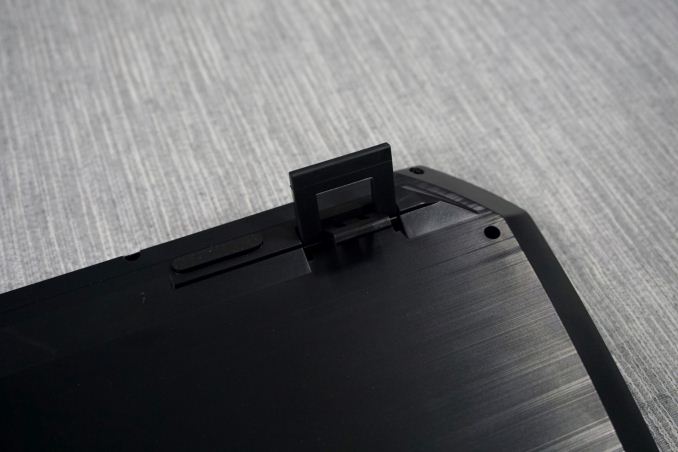 Tesoro offers the Lobera Supreme with every popular kind of mechanical switch available; Blue, Black, Red and Brown. The sample depicted in this review has Blue mechanical switches, which are relatively soft and with loud tactile feedback. Tesoro's supplier is not Cherry MX, but a company called Kailh. Unlike some companies, Tesoro is not trying to hide this fact. Kailh's products are a direct copy of Cherry's, advertising exactly the same properties, quality and performance. Our previous reviews revealed that Kailh's switches may not be as consistent as Cherry. This is not the case with the sample used for this review. All of the main keys required an actuation force between 53cN and 61cN, very close to the 58.9cN rating of the Blue switch. 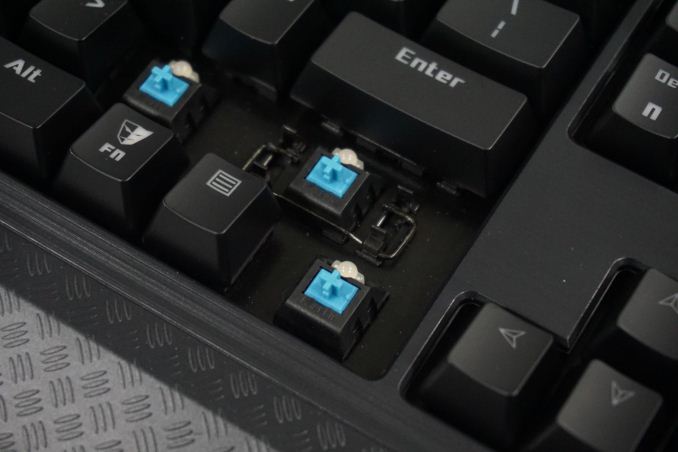 The Lobera Supreme is one of the first keyboards that come with the ability to select the lighting color. The only partial exception is the three macro keys beneath the space bar, which are illuminated but it is not possible to change their color. Every major key has a LED beneath it and it can be switched to all major colors. However, it is not possible to program the color of each key individually, or even whether the lighting will be on or off. There are only three pre-programmed modes. The first mode illuminates every key. The second mode is a "game mode" that lights only the WASD, Space, Enter and arrow keys. Finally, the third is an "extended game mode" that expands to include the number, CTRL, ALT, TAB, Shift and Caps Lock keys. A stripe at each side of the keyboard illuminates the desk with (about) the same color that has been selected for the keys. The only visual dissonance is the lighting of the space bar key, where the company logo is far too wide and the lighting is clearly much stronger towards its center.

When a color has been selected for the keyboard, this extends to the strips on its sides as well, illuminating the desk. Unfortunately, the color reproduction is not always exactly identical to that of the keys, as the color of the side LEDs tends to be less saturated. 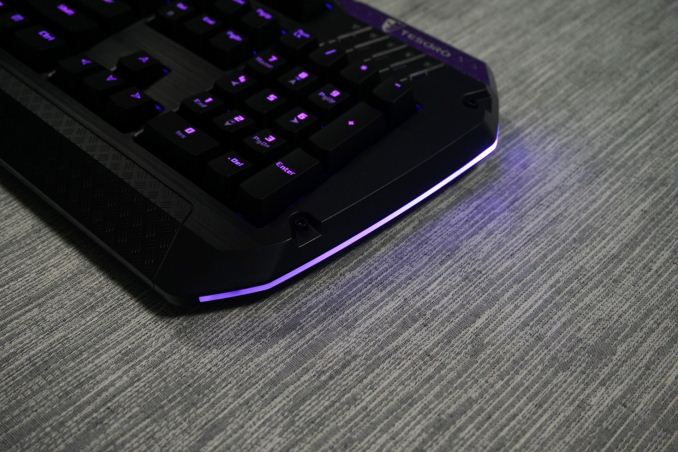 As for the structural cohesion and general build quality, the Lobera Supreme ranks above average but it could be significantly better. The main board of the keyboard is supported on a very robust steel plate but the external body is nothing more than average plastic. Internally, the parts used are very good and the layout is clean, with a very good and tidy assembly job. The soldering however is below average, with many dirty and messy joints. 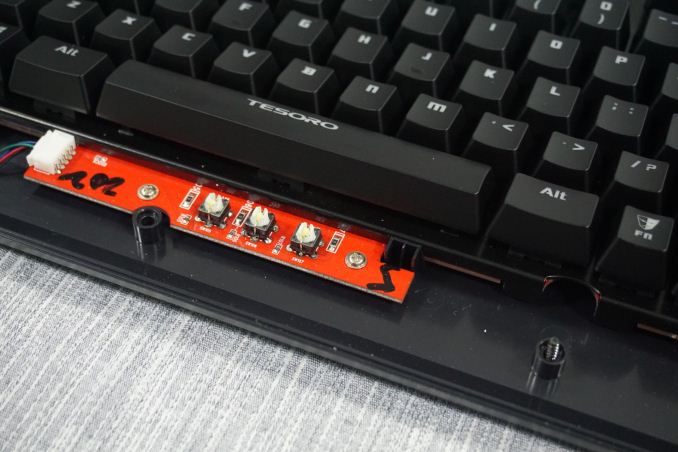 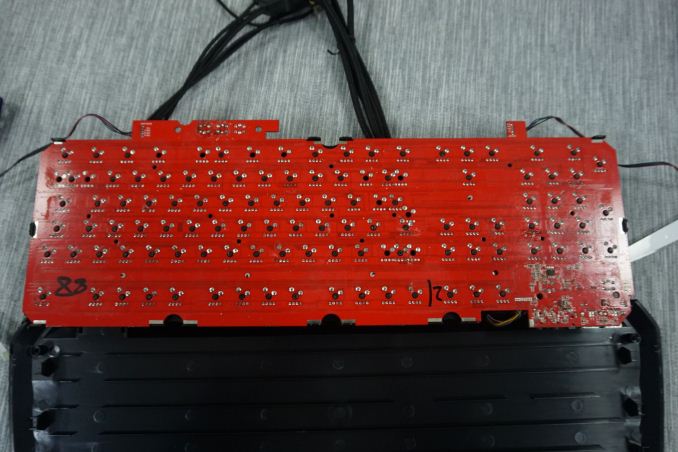 A Freescale MC9S08JM32 microcontroller is the heart of the Lobera Supreme. It is a rather basic model, with a 48MHz CPU, 32KB flash memory and 4KB on-chip RAM, commonly used in mechanical keyboards. A Genesys Logic GL850G USB controller for the hub can also be seen near the microcontroller. 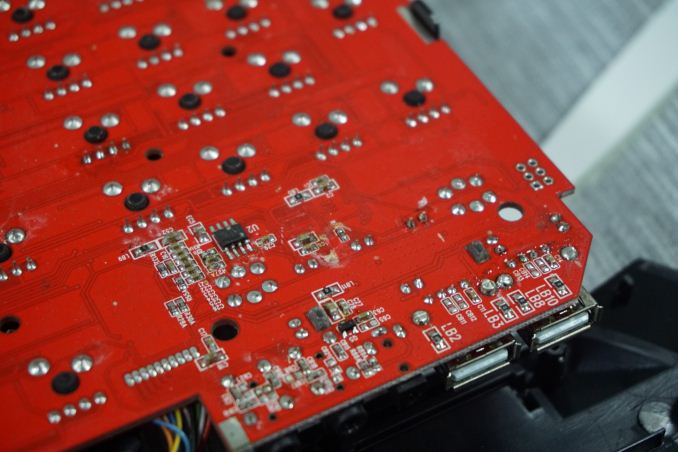 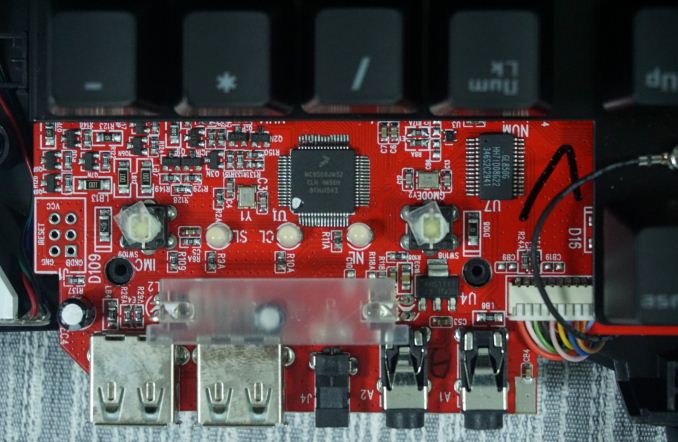