This is primarily a gaming notebook, or if you want to stuff in a Quadro GPU it’s a mobile workstation, so we’ll start right with the important bits: gaming performance. There are a variety of GPUs available for use with the P750ZM, including the 980M 8GB we’re testing, a 970M 6GB that drops the price nearly $300, or you can even go for the 965M 4GB and save $450 – all at the cost of performance, of course. It’s also worth noting that the memory configurations on these parts are fully enabled as far as we’re aware, so there’s none of the “OMG I only have 3.5GB of VRAM” craziness of the desktop GTX 970 here. Of course, we’re more likely to hit other bottlenecks before the 8GB VRAM becomes an issue with the 980M, but that’s a different matter.

We’ve recently revamped our laptop gaming test suite, including some titles released in mid to late 2014; however, since we don’t have many results with the latest games (Civilization: Beyond Earth, Dragon Age: Inquisition, Far Cry 4, GRID Autosport, and Middle-Earth: Shadow of Mordor) we’ll include the full 2014 gaming suite for now; the other results are available in Notebook Bench.

We’ve run the P750ZM at our usual Enthusiast (1080p Max), Mainstream (1600x900 High), and Value (1366x768 Medium) settings, though we’ll stick to reporting our Enthusiast results here; again, the other results can be viewed in Bench. I’ve also run additional tests at the native 3840x2160 resolution of the display, at various quality settings (with the goal of getting more than 40 FPS if possible). Those results are in a separate chart below. 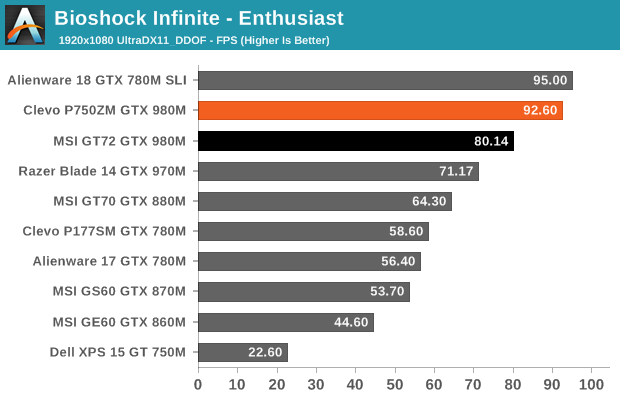 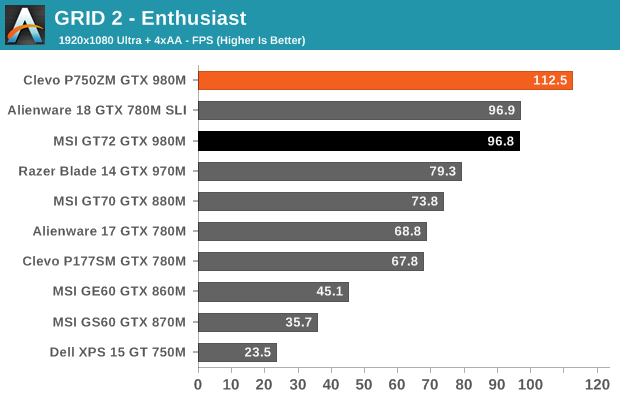 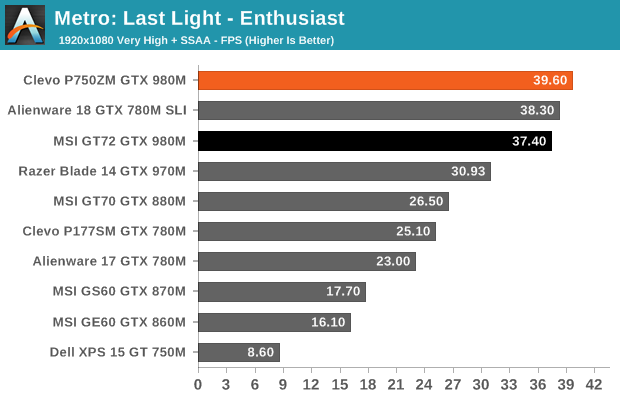 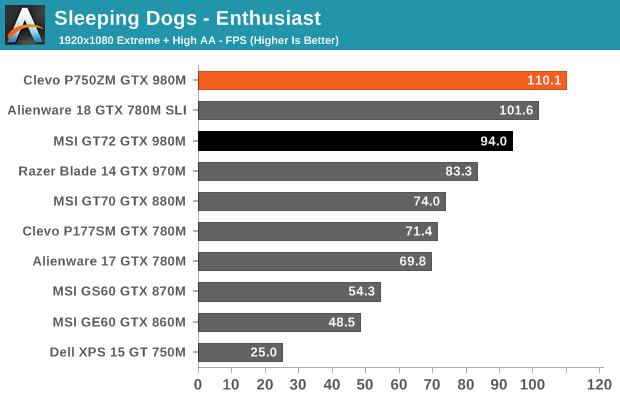 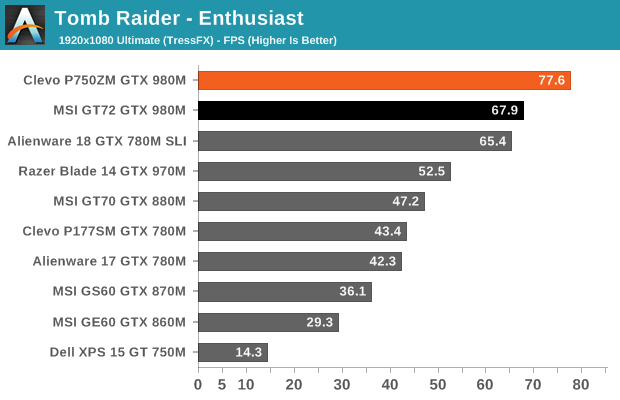 At our default Enthusiast settings, the only game that actually struggles to hit playable frame rates is Metro: Last Light. It still hits nearly 40FPS average, and this is with SSAA enabled (which is arguably too much to expect of any non-SLI notebook for the time being), but it does serve as a good “worst-case” scenario. Most of the other titles are well above 60 FPS, so the GTX 980M is more than powerful enough for such a resolution. It’s also interesting to see that even at settings that are traditionally GPU limited (1080p Ultra), especially for mobile GPUs, the GTX 980M still benefits from access to a faster i7-4790K processor. Of course, some of the performance changes are likely caused by using different drivers; the jumps in performance seen in BioShock, Sleeping Dogs, and Tomb Raider at least appear to have more to do with drivers than the CPU.

Looking at our newer gaming benchmark additions, most of the above still holds true. 1080p Ultra is definitely playable, though it’s interesting to note that Dragon Age: Inquisition is at 51FPS while Far Cry 4 and Shadow of Mordor are just above 60 FPS – so three of the five new titles we’ve added for 2015 tend to be more demanding than the previous 2014/2013 titles. But what about 4K gaming performance? For that, I’ve created a separate chart noting the settings used for each game at the native resolution: 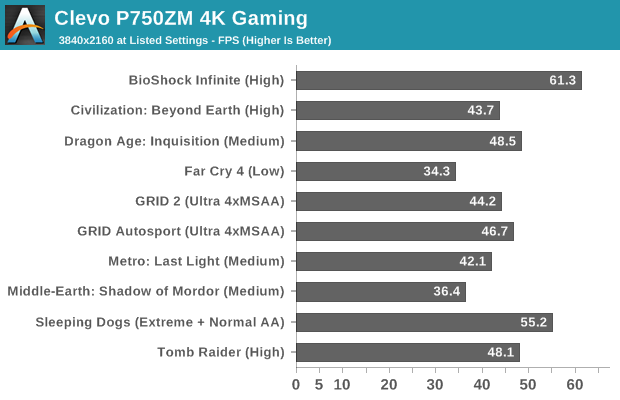 With ten games tested, we were able to find reasonably playable settings in eight of the games. The two exceptions are again newer titles; Far Cry 4 even at Low quality proves to be quite demanding, averaging just 34FPS –you can’t even turn down the quality more to improve frame rates. Middle-Earth: Shadow of Mordor posts a similar frame rate of 36FPS, but that’s using Medium quality so there’s still an option to turn down a few more sliders if needed. It’s also interesting to note that NVIDIA’s GeForce Experience (GFE) comes up a bit short in this case, as there are no “optimal” settings for the GTX 980M at 3840x2160. (2560x1440 is the highest resolution where there are recommendations in GFE for the 980M right now.) You can still use the quality slider to pseudo-manually configure games at 4K, but we might have to wait a bit longer for GFE to catch up in this case.

Finally, as with the MSI GT72, I’ve run a larger collection of gaming benchmarks on the P750ZM and GTX 980M, and I’ve also run the same tests on the GT72, GT70, GS60, and GE60 (which I no longer have access to, so the results are with older drivers – I was able to retest a few games on the GT72 to “correct” the scores, but the GS60 and GE60 were on the 344 or perhaps earlier driver branch). Using maximum quality settings at 1080p, here’s what the performance looks like: 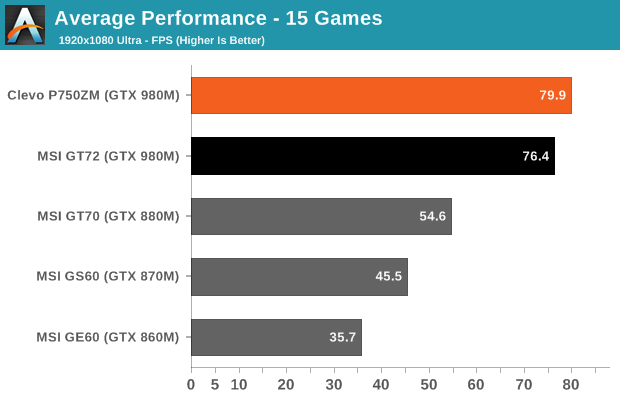 It’s interesting that even at 1080p Ultra quality (generally speaking, all settings at maximum) there’s still an average performance increase of ~5% gained by running the P750ZM with a desktop CPU. Of course, we’re looking at benchmarks with what is essentially the “entry level” mobile quad-core chip, the i7-4710HQ. That chip is nominally clocked at 3.2-3.5GHz where the i7-4790K is nominally clocked at 4.1-4.4GHz, so in tests like Cinebench the i7-4790K is around 25% faster than the i7-4710HQ.

That 25% performance advantage can definitely show up in certain games, especially those that tend to only hit two CPU cores (e.g. StarCraft II, though we didn’t test that particular title). There will be games where the speedup is very large while others will show little to no difference. In general, at least at 1080p Ultra we expect the majority of newer games will see closer to a 0-10% performance change thanks to the CPU, all other aspects being kept constant. Drop the settings a bit and you’re more likely to start seeing 10-25% performance improvements, at least provided nothing else becomes a bottleneck.

There’s another topic regarding performance that we’re only going to briefly mention here, and that’s overclocking potential. There are two overclocking targets to discuss, the first being the CPU and the second being the GPU. The former is actually pretty easy to sum up: there’s not much headroom for overclocking the i7-4790K in the Clevo P750ZM, or at least not on our test system. We tried pushing clocks up 100-200MHz across all cores, and while there were a few cases where the CPU would hit 4.6GHz on a single core, in practice the thermal limits end up kicking in and the CPU will generally throttle back to the point where performance is essentially the same as what you’ll get simply running stock clocks. Even at stock, it’s possible to hit 99C on the CPU (we’ll see this later), which is both too hot for my long-term comfort as well as causing a drop from maximum Turbo Boost clocks on a regular basis.

Overclocking the GPU is the other option, and while the current NVIDIA 347 series drivers have officially locked out overclocking, we’ve done some testing with the 344.75 drivers. Perhaps more pertinent to the discussion here is that where the CPU often hits close to Tj Max and reduces clocks, the GTX 980M seems to have a lot more potential for pushing clocks. Without getting into the deeper discussion of GPU overclocking, we’ll simply note here for the time being that tweaking the GPU clocks can yield some great results (roughly 20% in some cases). We’ll have a separate article on the subject in the near future, but it will be interesting to see what NVIDIA ends up doing regarding locked clocks. Because while NVIDIA has officially announced that they’ll re-enable mobile GPU overclocking with a future driver, the GTX 970M and 980M VBIOS are now shipping locked. VBIOS mods are almost required to properly overclock regardless, but really you need both an unlocked VBIOS and unlocked drivers or there’s nothing to be done.

Summing up the current state of mobile gaming performance, the P750ZM doesn’t radically alter what we think of the GTX 980M. It was the fastest mobile GPU when we first looked at it in the MSI GT72, and while the P750ZM is often a bit faster, it’s typically not enough to make a meaningful difference in any current games. Drivers have just as much potential to cause differences as the CPU (e.g. we saw a huge jump in performance in Alien: Isolation and BioShock Infinite when moving from 344 to 347 drivers, but are two of a handful of major changes), but with the same driver set most notebooks with a 980M will perform similarly.