ASRock's Steel Legend series is one of its newest categories of board, and is positioned more towards entry-level users. Since its inception in 2019 via the B450 Steel Legend, the design has subtly changed from a basic aesthetic to something with a bit more of a unified look. Dominating the design is a black, grey, and white urban camouflage-inspired printing on the PCB, with light silver and grey heatsinks for added contrast. Regarding RGB lighting, ASRock includes multiple areas, including small illuminated Steel Legend logos on the rear panel cover and chipset heatsinks, with a strip of RGB LED's positioned on the right-hand side, which creates a nice and subtle under glow effect. There are integrated headers on the board, including two standard RGB LED headers and two addressable RGB headers in case users want to add more pizazz to their system. 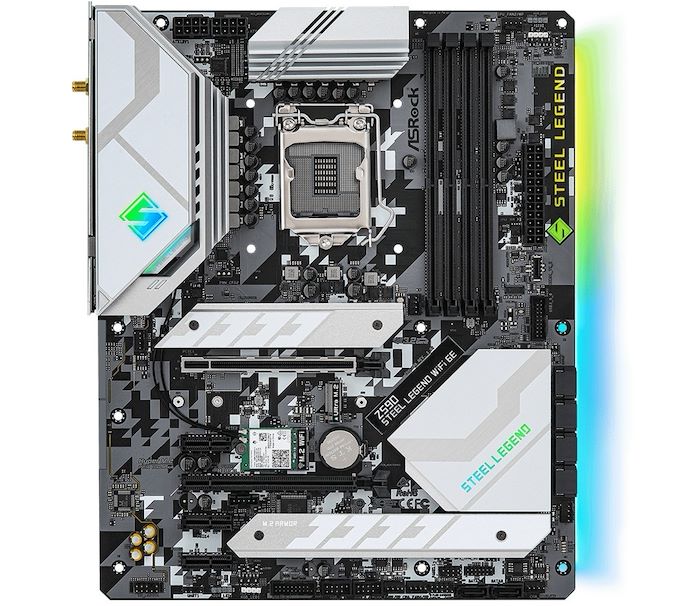 On the lower portion of the Z590 Steel Legend WiFi 6E is the board's PCIe slots. This includes two full-length PCIe slots, including one full-length PCIe 4.0 x16 slot coated with ASRock's Steel Slot armor reinforcement, while the second full-length slot is electronically locked to PCIe 3.0 x4 through the chipset. Also present are three smaller PCIe 3.0 x1 slots. In and around the PCIe slot area are a trifecta of M.2 slots, including a PCIe 4.0 x4 slot (top), with support for form factors up to 2280, and two PCIe 3.0 x4 slots (bottom), which also include support for M.2 SATA drives. Two of the board's M.2 slots are covered by silver contrasting M.2 heatsinks. For conventional SATA devices, ASRock includes six SATA ports, with two straight-angled ports located in the bottom right-hand corner and four right-angled SATA ports to the right-hand side. 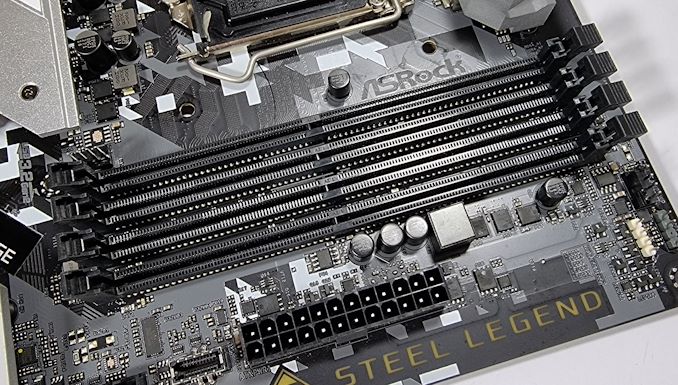 Located in the top right-hand corner are four memory slots. The ASRock Z590 Steel Legend WiFi 6E includes support for up to DDR4-4800 memory when used with a Rocket Lake (11th Gen) processor and up to DDR4-4666 with Comet Lake (10th Gen). In total, users can install a maximum of up to 128 GB, with support for 32 GB memory sticks. 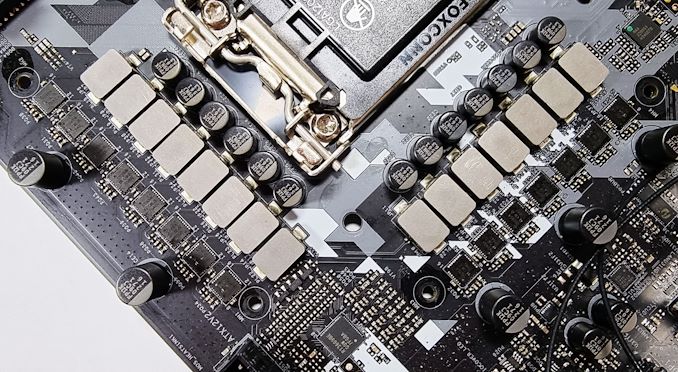 The power delivery on the ASRock Z590 Steel Legend WiFi 6E uses two independently operated elements for the CPU and SoC. For the CPU section, ASRock uses twelve Vishay SiC654 50 A power stages, which are operating in parallel, meaning the Richtek RT3609BE PWM controller is operating at 6+0. As mentioned, the SoC is independent, and is controlled by a Renesas RAA229001 PWM controller, and consists of two Vishay SiC654 50 A power stages. Overall the design of the power delivery is technically a 6+0 and 2+0 configuration operating in tandem with each other. Providing power to the power delivery is a pair of 8-pin 12 V ATX power inputs.

Keeping the power delivery cool is a pair of silver metal heatsinks, with one that sits underneath the plastic rear panel cover and the other sitting along the top of the board. The heatsinks themselves are attached to the board via a pair of screws, and as the impressions on the thermal pads show, the heatsinks make a decent connection to the components.

Focusing on the integrated audio, the Z590 Steel Legend WiFi 6E is using a Realtek ALC897 HD audio codec. The audio PCB itself is relatively basic, with just four Japanese Nichicon gold audio capacitors alongside the codec. ASRock includes a front panel audio header for users wishing to add front panel functionality with compatible chassis. The PCB itself includes a line of separation from the rest of the board's componentry.

On the rear panel is a modest selection of input and output. Looking at USB connectivity, there's one USB 3.2 G2 Type-C, one USB 3.2 G2 Type-A, two USB 3.2 G1 Type-A, and two USB 2.0 Type-A ports. The board does include support for one USB 3.2 G2x2 Type-C port, but users will need to use the provided header just to the right of the memory slots. Also on the rear panel is a pair of video outputs consisting of an HDMI 2.0 and DisplayPort 1.4. At the same time, the Realtek ALC897 HD audio codec drives five 3.5 mm color-coded audio jacks S/PDIF optical output. For users with legacy peripherals, ASRock includes a PS/2 keyboard and mouse combo port. In terms of networking, the board uses a Realtek RTL8125BG 2.5 GbE port and has two prongs to attach the Intel AX210 Wi-Fi antenna kit provided in the accessories. 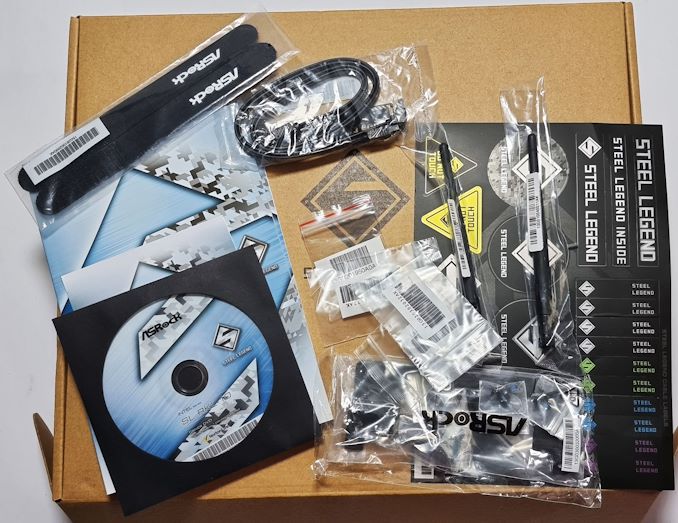 Included with the ASRock Z590 Steel Legend WiFi 6E is a basic but functional set of accessories. The most notable of these include an Intel AX210 Wi-Fi 6E antenna, two black SATA cables, and ASRock's Patent Pending graphics cardholder.