The ASRock Aqua UEFI firmware features the Aqua branding throughout which aligns it with the boards aesthetic. Opting for a cleaner black background with grey logo, the firmware uses white text throughout. Rather than split the firmware up into the usual easy and advanced modes, the ASRock X570 Aqua has a single mode which incorporates more of what we have seen from an advanced mode. There are eight different sections to browse through from the Main screen to the Exit menu, with a lot of customizable features and functionality offered in every menu in-between. 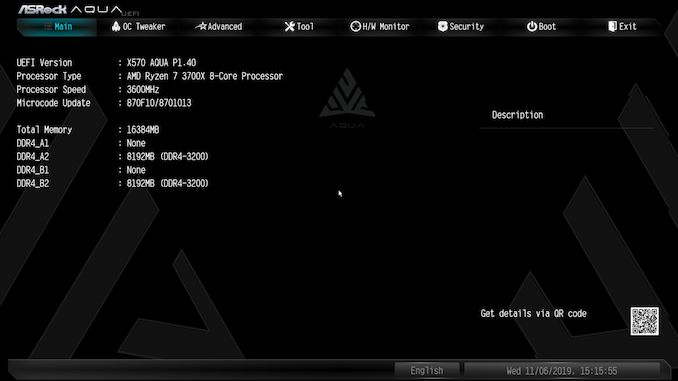 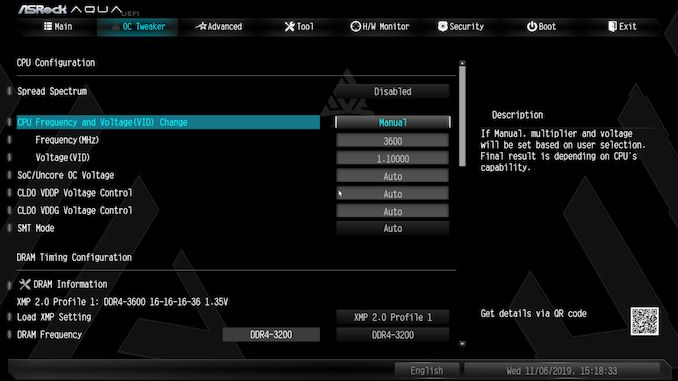 Moving along to the OC Tweaker section and all of the boards primary overclocking settings can be found here. Users looking to overclock either the CPU, memory, or even both, can do so with a wide variety of options including settings for CPU Frequency, voltages, and an option to enable the X.M.P profile on supported memory. There is a DRAM Timing Configurator for users looking to tighten or slacking memory latencies, as well as the option to alter the frequency, with relevant customizable memory voltage settings also present. Below is a list of limitations for settings including CPU Frequency, CPU VCore, DRAM frequency, and Infinity Fabric/FCLK frequency. It should be noted that these maximum values won't be able to be reached, even with more extreme cooling methods: 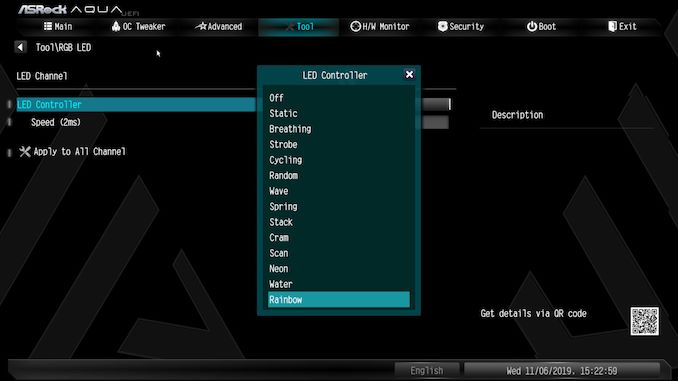 As we have seen with other ASRock models so far on X570, the RGB utility within the firmware looks very basic and outdated. The LED controller has thirteen different lighting effects to select from including static, breathing, and scan, with the ability to increase or decrease the effect speed in ms. Users can also sync and apply the effect across all of the channels, but there are no options to select or customize each individual header. 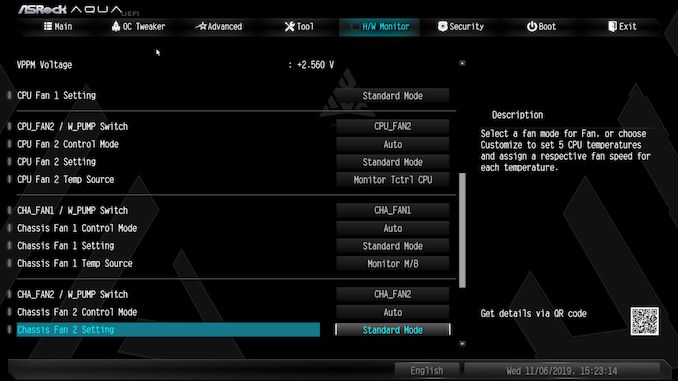 ASRock has an interesting and useful FAN-Tastic fan tuning utility on some of its models and remembering that the X570 Aqua costs $999, we can't understand why this isn't included. Touching on what is included, users can customize each of the available five 4-pin headers with different modes from the performance mode which is more for overclocking profile, to the standard which ramps fan less aggressively. Each fan can rely on a different temperature sensor too including CPU temperature noted as Tctrl CPU in the firmware or from the sensor recording motherboard temperature. Users can also switch each 4-pin fan header between a water pump, and regular chassis fans, although the primary CPU fan header cannot be altered in this way.

For a halo product with a price tag of $999, the firmware on the ASRock X570 Aqua isn't as comprehensive as we would have expected. The layout is user-friendly and follows a single advanced mode with each menu housing a wide variety of customizable settings. From the prehistoric GUI and usability of the RGB section of the firmware to the lack of the ASRock FAN-Tastic tuning utility in the BIOS, ASRock could have done more with the firmware. It's not necessarily bad and it does have many useful overclocking and power features to customize. It's very responsive and well-laid out, it's just lacking a little something for a model costing close to $1000.

Most of the following software analysis comes from our ASRock X570 Phantom Gaming-ITX/TB3 motherboard analysis as both models share almost the same software suite.

The ASRock X570 Aqua comes with a couple of useful software utilities including the ASRock Motherboard Utility, or as the software opens up as, the A-Tuning overclocking utility, and the ASRock Polychrome RGB software for the integrated RGB LEDs and RGB headers featured on the board. 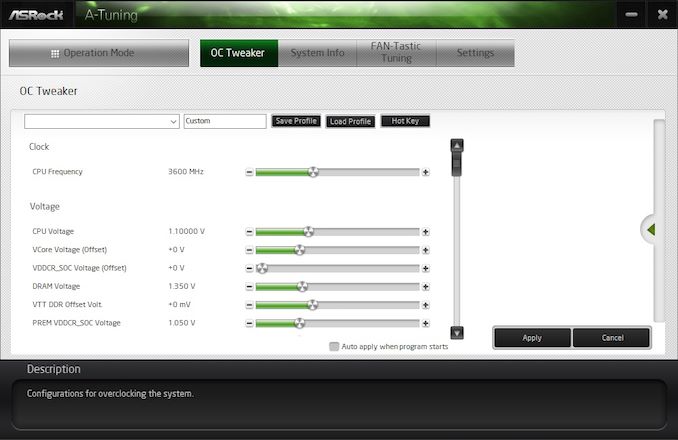 The ASRock A-Tuning utility has a basic GUI and has plenty of options to overclock within Windows and tweak settings such as CPU VCore, CPU ratio, CPU cache ratio, and DRAM voltage. One thing users cannot do is customize the memory frequency which will have to be done in the BIOS. 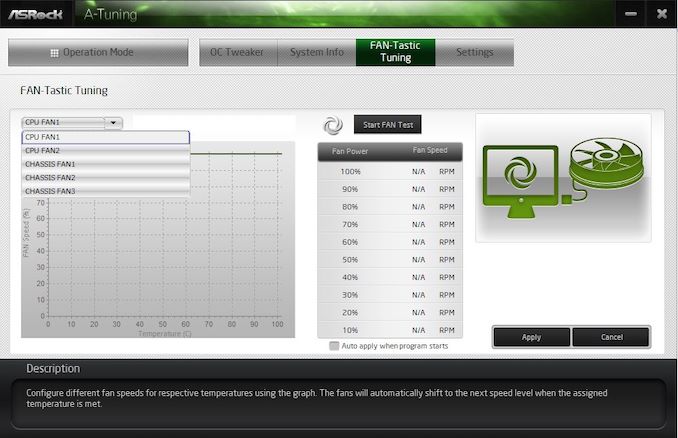 Within the A-Tuning software is the FAN-Tastic utility which is missing from the firmware. Users can customize based on fan curves, or with preset profiles such as full-speed, or even allow the software to tune the fans based on current temperatures. 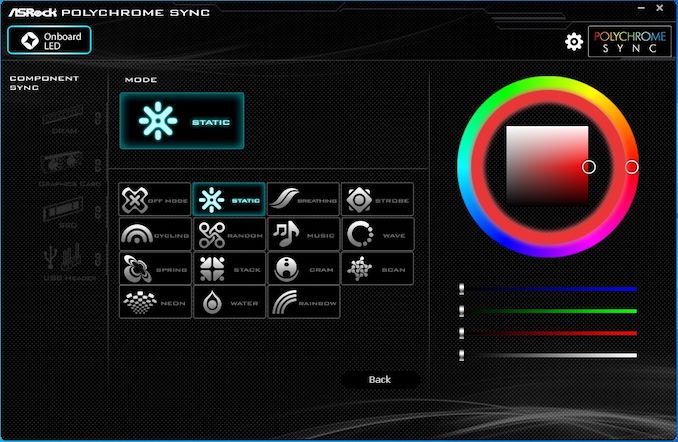 Users can customize the integrated RGB LED strip at the bottom of the board or strips installed into the two headers via the ASRock Polychrome Sync software. The GUI is very user-friendly and ASRock allows you select different types of lighting effects including static, random, wave, and rainbow; there are fourteen different modes not including the ability to switch the RGB LEDs off altogether. 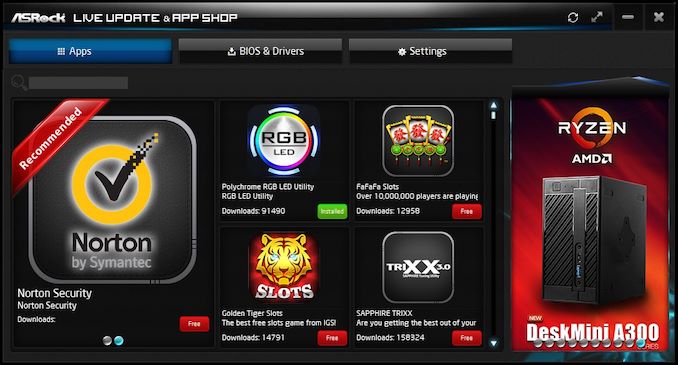 The ASRock App Shop is awash with unsavoury looking gambling apps which have been a mainstay since they released this application, but as it's been combined with the Live Update application too, it does serve a good purpose. Users can download and update the ASRock software applications, as well as keep important drivers up-to-date, as well as update the firmware to the latest version without having to use the tool within the firmware.

Like we have found with the majority of motherboards recently tested, vendors haven't included adequate audio software in with the bundle, or made readily available from the official product pages. Even just adding a simple link for users to download this would make the overall user experience better. Unlike the firmware, the software doesn't resemble the ASRock Aqua branding, and it would make the overall experience immersive to users spending close to $1000 on a special edition halo product.