When the POWER8 was first launched, the specs were mind boggling. The processor could decode up to 8 instructions, issue 8 instructions, and execute up to 10 and all this at clockspeed up to 4.5 GHz. The POWER8 is thus an 8-way superscalar out of order processor. Now consider that

and you know this is a bold move. If you superficially look at what kind of parallelism can be found in software, it starts to look like a suicidal move. Indeed on average, most modern CPU compute on average 2 instructions per clockcycle when running spam filtering (perlbench), video encoding (h264.ref) and protein sequence analyses (hmmer). Those are the SPEC CPU2006 integer benchmarks with the highest Instruction Per Clockcycle (IPC) rate. Server workloads are much worse: IPC of 0.8 and less are not an exception.

It is clear that simply widening a design will not bring good results, so IBM chose to run up to 8 threads simultaneously on their core. But running lots of threads is not without risk: you can end up with a throughput processor which delivers very poor performance in a wide range of applications that need that single threaded speed from time to time.

The picture below shows the wide superscalar architecture of the IBM POWER8. The image is taken from the white paper "IBM POWER8 processor core architecture", written by B. Shinharoy and many others. 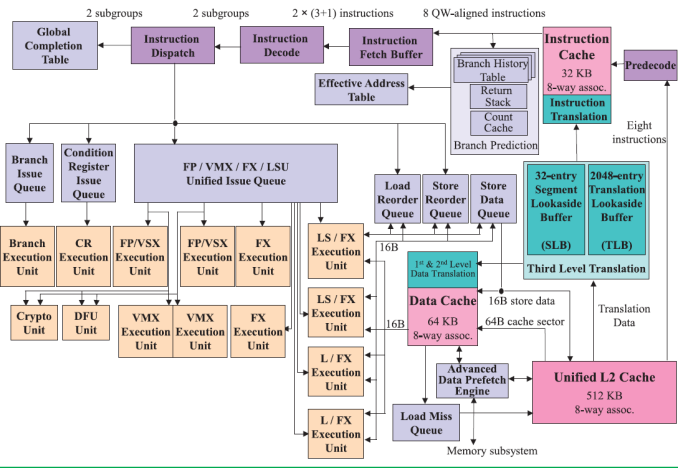 The POWER8+ will have very similar microarchitecture. Since it might have to face a Skylake based Xeon, we thought it would be interesting to compare the POWER8 with both Haswell/Broadwell as Skylake.

The second picture is a very simplified architecture plan that we adapted from an older Intel Powerpoint presentation about the Haswell architecture, to show the current Skylake architecture. The adaptations were based on the latest Intel optimization manuals. The Intel diagram is much simpler than the POWER8's but that is simply because I was not as diligent as the people at IBM. 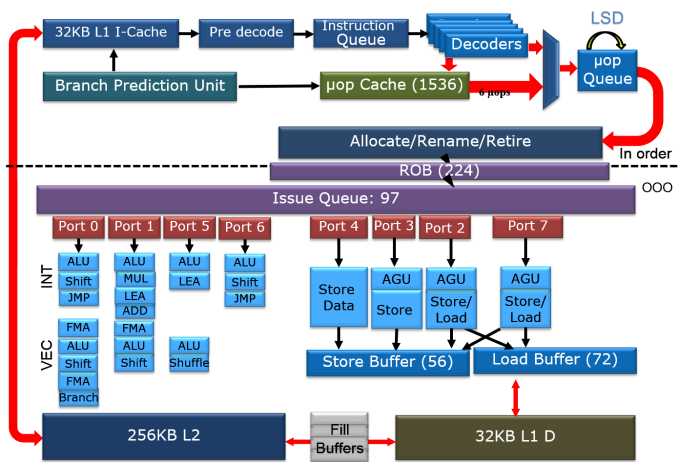 It is above our heads to compare the different branch prediction systems, but both Intel and IBM combine several different branch predictors to choose a branch. Both make use of a very large (16 K entries) global branch history table. Both processors scan 32 bytes in advance for branches. In case of IBM this is exactly 8 instructions. In case of Intel this is twice as much as it can fetch in one cycle (16 Bytes).

On the POWER8, data is fetched from the L2-cache and then predecoded into the L1-cache. Predecoding includes adding branch, exception, and grouping. This makes sure that predecoding is out the way before the actual computing ("Von Neuman Cycle") starts.

Back to the POWER8. Eight instructions are sent to the IBM POWER8 fetch buffer, where up 128 instructions can be held for two thread(s). A single thread can only use half of that buffer (64 instructions). This method of allocation gives each of two threads as much resources as one (i.e. no sharing), which is one of the key design philosophies for the POWER8 architecture.

Just like in the x86 world, the decoding unit breaks down the more complex RISC instructions into simpler internal instructions. Just like any modern Intel CPU, the opposite is also possible: the POWER8 is capable of fusing some combinations of 2 adjacent instructions into one instruction. Saving internal bandwidth and eliminating branches is one of the way this kind of fusion increases performances.

Contrary to the Intel's unified queue, the IBM POWER has 3 different issue queues: branch, condition register, and the "Load/Store/FP/Integer" queue. The first two can issue one instruction per clock, the latter can send off 8 instructions, for a combined total of 10 instructions per cycle. Intel's Haswell-Skylake cores can issue 8 µops per cycle. So both the POWER8 and Intel CPU have more than ample issue and execution resources for single threaded code. More than one thread is needed to really make use of all those resources.

Notice the difference in focus though. The Intel CPU has half of the load units (2), but each unit has twice the bandwidth (256 bit/cycle). The POWER8 has twice the amount of load units (4), but less bandwidth per unit (128 bit per cycle). Intel went for high AVX (HPC) performance, IBM's focus was on feeding 2 to 8 server threads. Just like the Intel units, the LSUs have Address Generation Units (AGUs). But contrary to Intel, the LSUs are also capable of doing simple integer calculations. That kind of massive integer crunching power would be a total waste on the Intel chip, but it is necessary if you want to run 8 threads on one core.