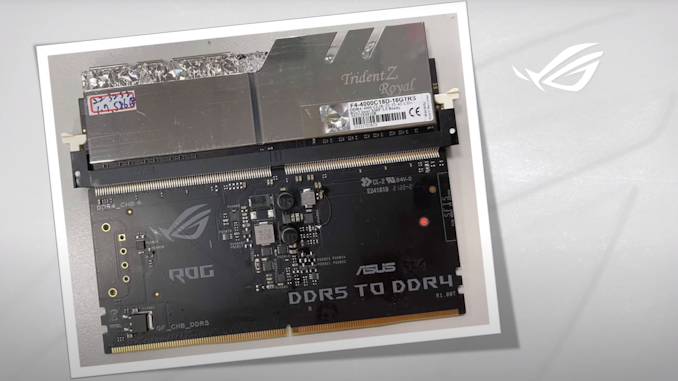 One of the key issues with purchasing a modern Alder Lake system today is the cost of the memory, especially when an enthusiast wants to use DDR5. Due to component shortages, particularly the power management controllers that each DDR5 module needs, costs of DDR5 are quickly rising, with some scalpers looking for $1000+ for basic memory kits. The solution to this has been to recommend that users look to pair Alder Lake with DDR4 memory, which although it isn’t the latest, is the more cost effective scenario. The downside to this solution is that the user has a DDR4-only motherboard, and not the next generation DDR5. That might become a solved issue soon enough, however.

In a preview video on YouTube posted today by Bing, who I believe is an ASUS ROG employee, the company has been working on a solution to allow users that buy ASUS Z690 motherboards built on DDR5, to run DDR4 in them. Because Intel limited the platform to either DDR5 or DDR4 per motherboard, there’s no way to run both, until now. In the video, Bing describes the new add-in card they’ve been prototyping.

The use case is fairly simple – have a DDR5 board like the ROG Apex, put the carrier card in a memory slot, and place the qualified DDR4 in the top.

Obviously, the situation here is more complex than simply using this carrier card. DDR5 and DDR4 are more than simply a notch difference between them – DDR4 is a single 64-bit memory channel per module, while DDR5 is dual 32-bit channel per module. The key issue is that DDR5 does power management per module, where DDR4 relies on power management on the motherboard, so that has to be taken into consideration. Also, adding in a carrier card extends memory traces, which could degrade the quality of the signal. 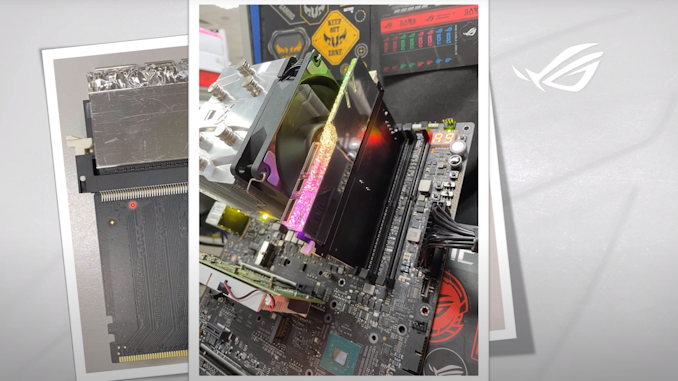 What ASUS does here is use a special BIOS revision to allow the ROG Apex DDR5 to run in DDR4 mode. This means that the traces to the memory slots, although laid out for DDR5 operation, are switched into DDR4 mode. Then, on the carrier card, this takes the 5V power signal and runs it through the equivalent of motherboard power management, and controls the data lines to maintain integrity for signal, latency, power, etc.

Bing explains in the video that this is still very much a prototype. It looks like they’re focusing to get it to work on one motherboard with one memory kit first, before optimizing it. Bing states that the carrier card is very tall, and there is room for optimization to make it smaller in the future before ASUS might offer it as a retail product. Also a wider range of validation is likely needed as well. 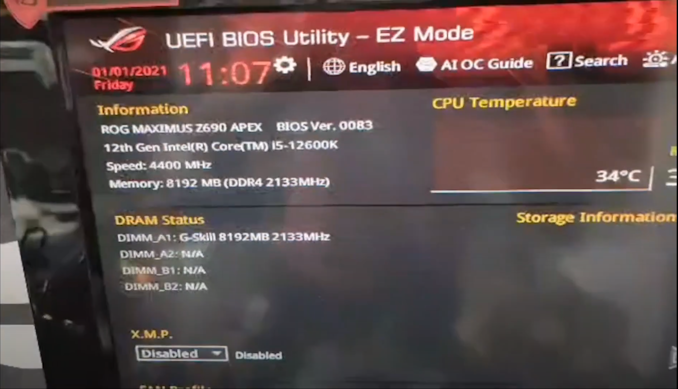 The video goes to show with a single DDR4 module in the carrier card the system running at DDR4-4400 with a Core i5-12600K. To confirm DDR5 still works, the system is shown running dual modules of DDR5-4400, at least to the BIOS screen. If these modules come to market, they are still in early prototypes, and ASUS will likely judge feasibility and demand for them for pricing.