Arm Announces Armv9 Architecture: SVE2, Security, and the Next Decade 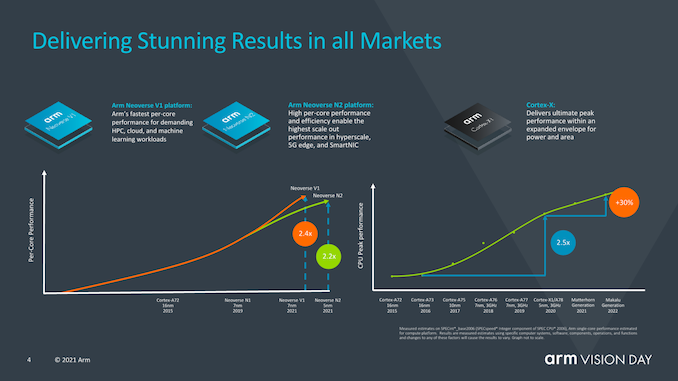 Arm talked about how the mobile space had seen performance increases of 2.4x (we’re talking purely ISO-process design IPC here) of this year’s X1 devices compared to the Cortex-A73 a few years ago in 2016.

Interestingly, Arm also talked about Neoverse V1 designs and how they’re achieving 2.4x the performance of A72 class designs, and discloses that they are expecting the first V1 devices to he released later this year.

For the next-generation mobile IP cores, code-named Matterhorn and Makalu, the company is disclosing an aggregate expected 30% IPC gain across these two generations, excluding frequency or any other additional performance gains which could be reached by SoC designers. This actually represents a 14% generational increases across these two new designs, and as showcased in the performance curve in the slide, would indicate that improvements are slowing down relative to what Arm had managed over the past few years since the A76. Still, the company states that the rate of advancement is still well beyond the industry average – admittedly that is being dragged down by some players. 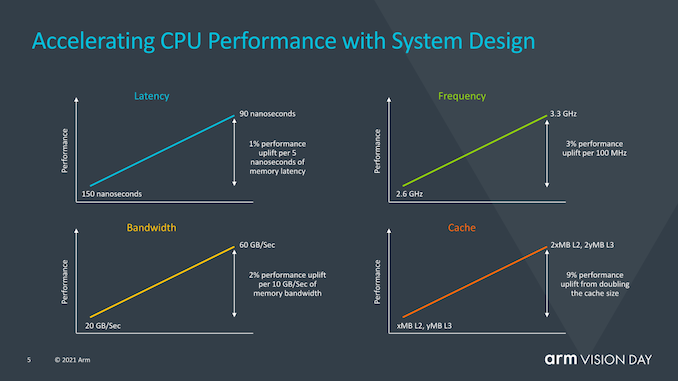 Oddly enough, Arm also included a slide that wanted to focus on the system-side impact on performance, rather than just CPU IP performance. Some of the figures presented here, such as 1% of performance per 5ns of memory latency have been figures that we had talked about extensively for a few generations now, but Arm here also points out that there’s a whole generation of CPU performance that can be squeezed out if one focuses on improving various other aspects of an implementations by improving the memory path, increasing caches, or optimising frequency capabilities. I consider this to be a veiled shot at the current conservative approaches from SoC vendors which are not fully utilising the expected performance headroom of X1 cores, and subsequently also not reaching the expected performance projections of the new core. 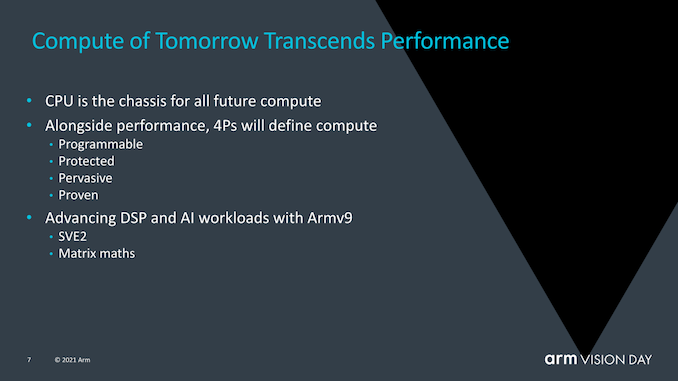 Arm continues to see the CPU as the most versatile compute block for the future. While dedicated accelerators or GPUs will have their place, they have a hard time to address important points such as programmability, protection, pervasiveness (essentially ability to run them on any device), and proven abilities to work correctly. Currently, the compute ecosystem is extremely fragmented in how things are run, not only differing between device types, but also differing between device vendors and operating systems.

SVE2 and Matrix multiplication can vastly simplify the software ecosystem, and allow compute workloads to take a step forward with a more unified approach that will be able to run on any device in the future. 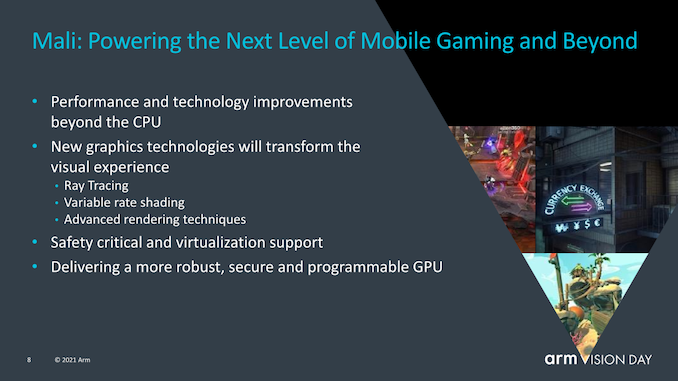 Lastly, Arm had a nugget of new information on the future of Mali GPUs, disclosing that the company is working on new technologies such as VRS and in particular Ray Tracing. The latter point is quite surprising to hear, and signals that the desktop and console ecosystem push by AMD’s and Nvidia’s introduction of RT is also expected to push the mobile GPU ecosystem towards RT.

Armv9 designs to be unveiled soon, devices in early 2022

Today’s announcement came in an extremely high-level format, and we expect Arm to talk more about the various details of Armv9 and new features such as CCA in the company’s usual yearly tech disclosures in the coming months.

In general, Armv9 appears to be a mix between a more fundamental ISA shift, which SVE2 can be seen as, and a general re-baselining for the software ecosystem to aggregate the last decade of v8 extensions, and build the foundation for the next decade of the Arm architecture.

Arm had already talked about the Neoverse V1 and N2 late last year, and I do expect the N2 at least to be eventually unveiled as a v9 design. Arm further discloses to expect more Armv9 CPU designs, likely the mobile-side Cortex-A78 and X1 successors, to be unveiled this year, with the new CPUs likely to have already been taped-in by the usual SoC vendors, and expected to be seen in commercial devices in early 2022.