The ASRock Rack EPYCD8-2T Motherboard Review: From Naples to Rome

It's no secret that AMD is looking to carve out a bigger share in the server market with their enterprise EPYC processors, and much fanfare has been made about the high core-count offered for the price when compared to Intel's Xeon range of processors. The ASRock Rack EPYCD8-2T looks to utilize all of the processing power offered by AMD's EYPC, and the EPYCD8-2T has a professional-centric feature set built into its ATX design. We also have eight memory slots, up to nine SATA ports, has two OCuLink to U.2 slots, dual 10 G Ethernet, and seven PCIe 3.0 slots. This model also supports both AMD's EPYC 7001 Naples and 7002 Rome Processors. 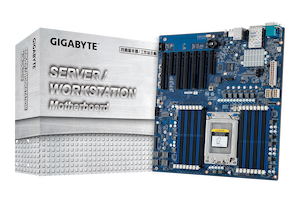 The workstation and server markets are big business for not only chip manufacturers such as Intel and AMD, but for motherboard vendors too. Since AMD's introduction of its Zen-based...