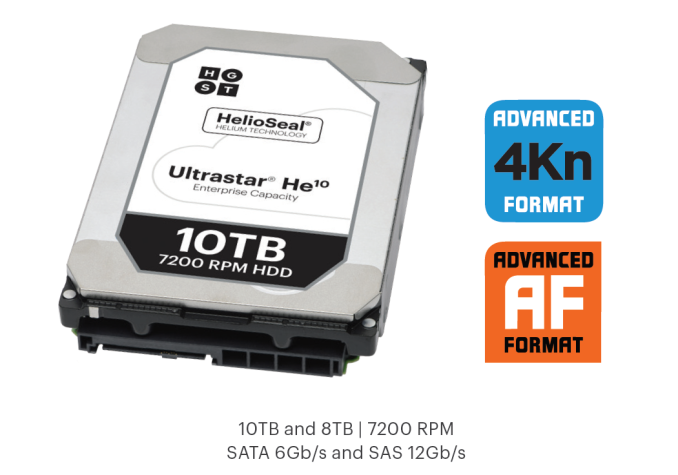 HGST, a Western Digital subsidiary, has been shipping hard drives sealed with helium for a couple of years now. Their helium drives have so far come in two flavors - the Ultrastar He drives using platters with traditional perpendicular magnetic recording (PMR) technology and the Ultrastar Archive Ha drives using platters with shingled magnetic recording (SMR). There are two main patented innovations behind the helium drives, HelioSeal and 7Stac. The former refers to placement of the platters in a hermetically sealed enclosure filled with helium instead of air. The latter refers to packaging of seven platters in the same 1" high form factor of traditional 3.5" drives.

The Ultrastar He6 6TB drive was introduced in November 2013, and this was followed by the He8 8TB drive late last year. In June 2015, the Ultrastar Ha10 SMR drive with HelioSeal technology was introduced. Around the same time, HGST also made it known that more than 1M HelioSeal units had been deployed. 1.33 TB platters have become available in air drives now, and HGST is taking advantage of that in the 10TB Ultrastar He10. The launch of the Ultrastar He10 PMR drive today also brings the news that more than 4M HelioSeal units have been deployed in various datacenters - pointing to the rapid rise in adoption rate of this technology.

We have already seen in our reviews that the helium drives offer the best performance to power ratio and watts per TB metric amongst all the drives in their capacity class. HGST also claim a 2.5M hour MTBF - much higher than traditional enterprise PMR drives. The initial cost of the helium drives have been substantially higher compared to the standard drives of the same capacity, but the TCO (total cost of ownership) metric is highly in favor of these drives - particularly for datacenter customers who need the drives to be active 24x7. HGST's press briefing included a slide that presented the potential TCO benefits that come about due to the increased capacity per rack, lower consumption per rack and lower power consumption per TB of the new He10 drives.

HGST indicated that the ramp in volume should help the initial cost to approach that of the air drives in the near future. For datacenter customers, that would mean an acceleration in obtaining the TCO benefits.

Coming to the core specifications, the Ultrastar He10 will come in both SATA 6Gbps and SAS 12Gbps varieties. The drives have 4KB sectors, though SKUs with 512-byte emulation are also available. Various data security options such as instant secure erase, self-encryption, secure erase and TCG encryption with FIPS are available. 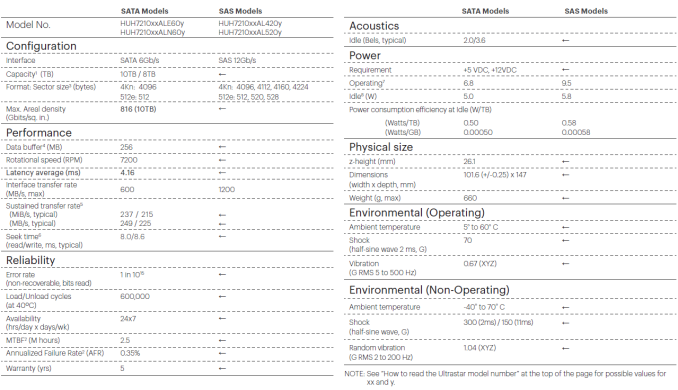 The standard Ultrastar He drive features such as rotational vibration safeguard (for better RV tolerance in multi-drive servers) and the rebuild assist mode (for faster RAID rebuild) are retained. The drives come with a 256MB DRAM buffer. 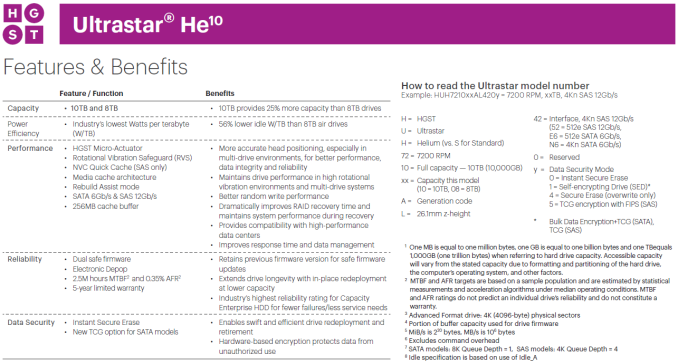 Hard drives are struggling to reach the 10TB capacity point with traditional PMR technology. While Seagate did announce a few 8TB PMR drives earlier this quarter, it really looks like vendors need to move to some other technology (shingled magnetic recording or heat-assisted magnetic recording (HAMR)) in order to keep the $/TB metric competitive against the upcoming high-capacity SSDs. As of now, helium seems to be the only proven solution causing minimal performance impact and HGST appears to have a strong hold in this particular market segment.