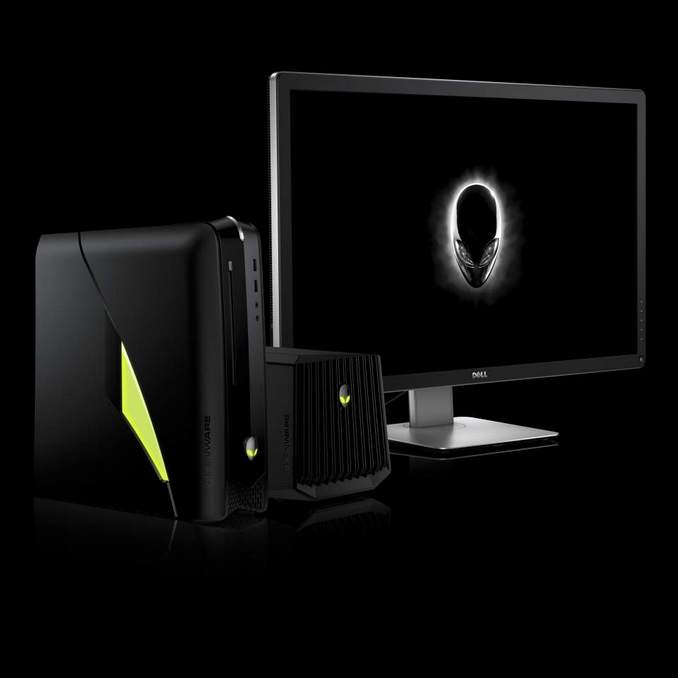 Today Alienware announced some refreshes to its lineup. On the laptop front, the Alienware 13, 15, and 17 notebooks have been updated, and the Alienware 18 notebook has made a comeback. The X51 Desktop is also refreshed, and can now be used with the same Alienware Graphics Amplifier that was available for the notebooks. 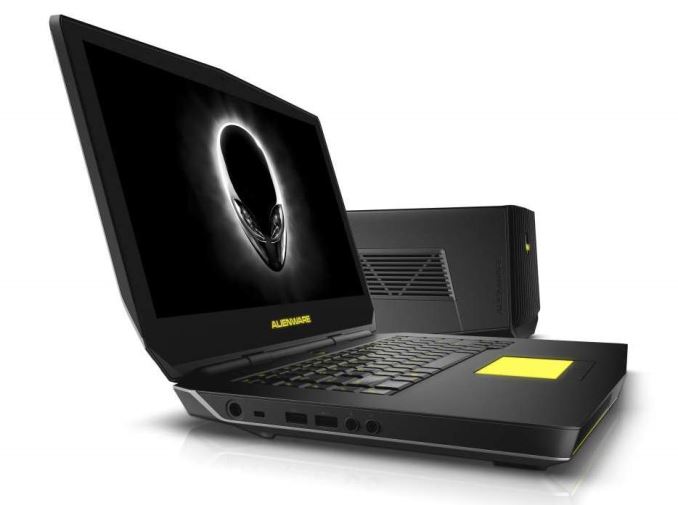 Starting with the laptops, the line was refreshed with the graphics amplifier as an option almost a year ago already, and the company says the new models have over 20 updates on tap. This includes USB Type-C ports for USB 3.1 and Thunderbolt 3 capabilities. Each of the laptops offers a different choice of processors, with the smallest of the bunch being outfitted with the 5th generation dual-core Core i5 and i7 U series, and the larger models offering quad-core 4th generation CPUs. On the GPU side, the NVIDIA GTX 960M graces the Alienware 13, the Alienware 15 offers a choice of the NVIDIA GTX 965M, GTX 970M, GTX 980M, or an AMD offering with the R9 M395X. The 17-inch model comes standard with the NVIDIA GTX 970M and can be upgraded to the GTX 980M. Unfortunately all models come standard with a spinning hard drive as the base option, but PCIe SSDs are available in all models. There are quite a few configurations available so it is easiest to reference this table.

Alienware is also offering dynamic overclocking capabilities for the CPUs which will hopefully take some of the guesswork out of the task for the non-professional overclocker. On the networking side, Alienware has gone with the Killer Wireless-AC and Gigabit Ethernet combination similar to what we have seen from some of the competition. 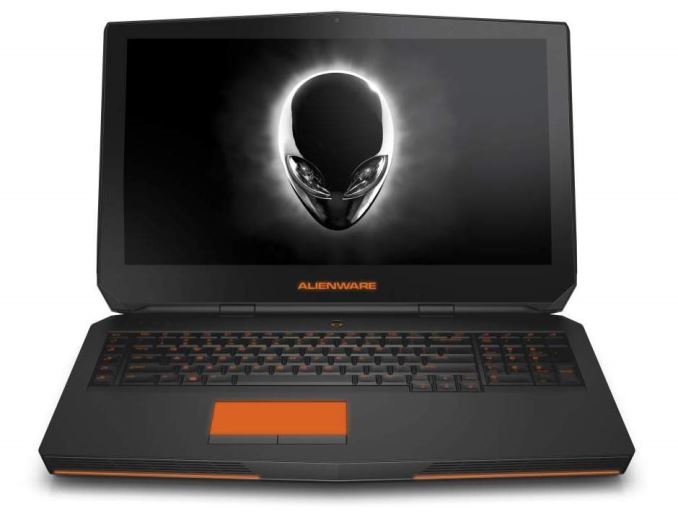 The displays should be good, if the Dell XPS 13 is any indication. Similar to that device, the Alienware 13 will also offer a 3200x1800 IGZO display with touch. The 15-inch model has just one display option with a 1080p IPS matte panel, and the 17-inch model starts with a 1080p base offering but will also offer a UHD 3840x2160 IGZO IPS display. The large panel notebooks are one of the few mobile devices which would be capable of running UHD but to this point it has been difficult to get one over 1080p so this should be a nice treat.

All of these laptops can also be connected to the Alienware Graphics Amplifier which would give you access to a desktop class GPU if you need even more compute power. 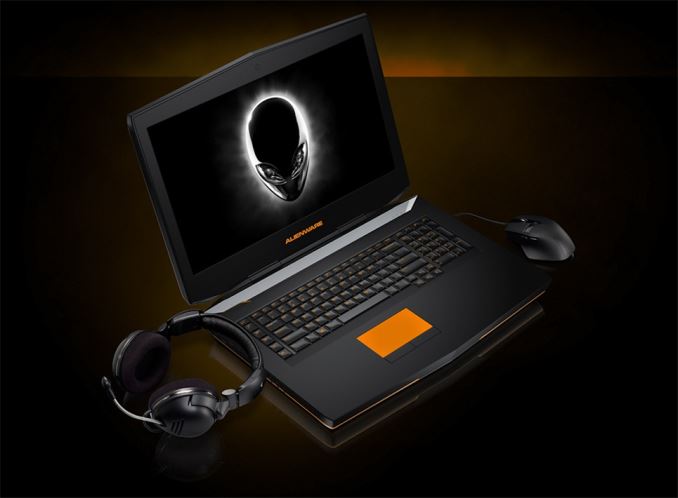 Back after a hiatus is the Alienware 18 which we last saw back in 2013 when the dual GPU 18.4-inch monster was reviewed by Dustin Sklavos. There are different offerings, but it will offer dual GTX 970M with 12 GB of GDDR5, or dual GTX 980M graphics with a combined 16 GB of GDDR5 memory. The Intel CPU is going to be socketed, so customers will be able to upgrade it on their own, and it will ship with a factory overclock. The Alienware 18 will be available with up to 32 GB of system memory and four hard drives. The Alienware 18 Special Edition should be plenty capable, but once again the base model ships with a spinning disk, and you have to upgrade to a mSATA SSD boot drive which is a shame for a notebook which starts at $2500.

The extra-large laptop displays have not yet made the leap to high resolution, so the Alienware 18 is only available with 1080p offerings. 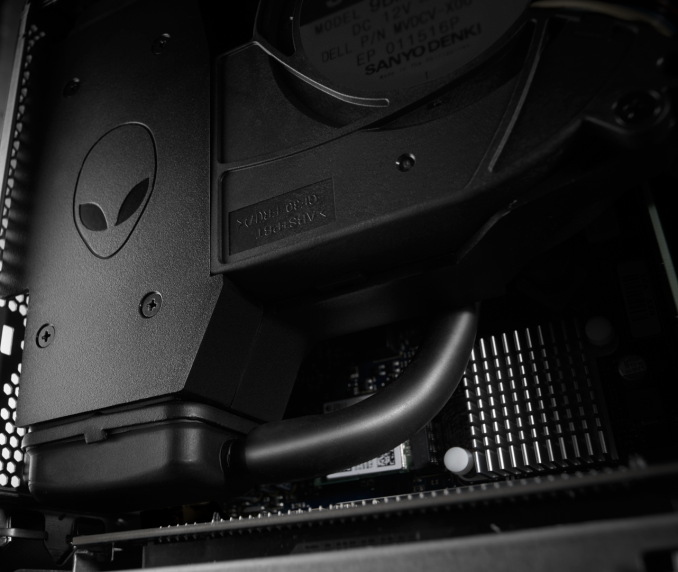 Finally, Alienware has refreshed its X51 desktop. The X51 fits in space wise between the small form factor Alpha and the large form factor Area-51. Alienware is targeting active keyboard and mouse gamers with this device, and the refreshed R3 model has moved to Skylake for the higher end models, and keeps a Haswell i3 model as the base. The $700 model comes with the NVIDIA GTX 745 GPU, and upgrades are available to the AMD Radeon R9 370 or NVIDIA GTX 960. There are a couple of interesting additions to this desktop. Alienware is offering a custom liquid cooling setup which should keep the temperatures in check, and will allow Alienware to offer overclocking of the CPU. It also adds support for the Alienware Graphics Amplifier which was first released on the notebook line. This may seem like an odd addition to a desktop, but the separate 460 watt power supply and chassis would allow a much larger GPU than could fit inside the small case of the X51. I think it is a neat addition especially if you have a laptop too, but it might be a hard sell to have someone buy a desktop and then buy something they have to put on the top of their desk.

Alienware’s new products are all available now at Alienware.com.