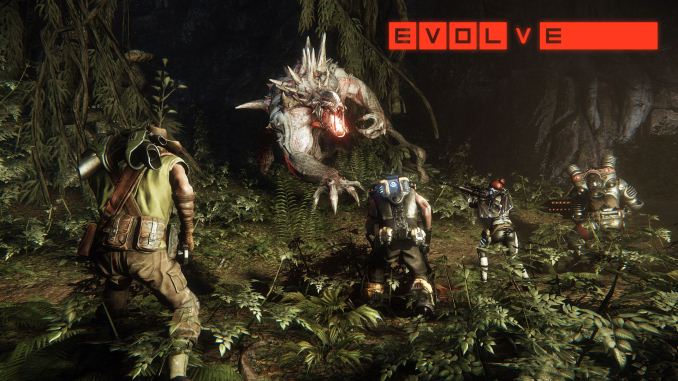 Today marks the release of the latest gaming beast: Evolve. Powered by CryEngine, you’d expect this to be another graphically demanding game that will require a lot of GPU power to run it at high resolutions and high quality settings, and right on time NVIDIA has released their latest 347.52 WHQL driver that’s Game Ready for Evolve. Also worth noting is that Evolve is an NVIDIA The Way It’s Meant to Be Played title. As usual, the new driver incorporates all of the performance improvements from NVIDIA’s 346 branch (346.xx and 347.xx driver versions), which makes nearly two months since the last major release (347.09), though there was also a 347.25 update for the GeForce GTX 960 launch. The drivers are available for all the major platforms and GPUs at the usual place.

As part of their Game Ready optimizations for Evolve, NVIDIA is including an SLI profile for the game, and I’ve confirmed that multi-GPU users (or at least GTX 970 SLI) should have no troubles right from the start – which hasn’t been the case with a few other launches during the past several months (e.g. Far Cry 4, Dying Light, and Assassin’s Creed: Unity to name a few). The release notes also detail performance improvements that have added up since the GeForce GTX 970/980 344.11 launch driver back in September, but while there are some decent increases most of these came earlier, so we don’t expect much of a performance difference from the earlier 347.xx drivers in most cases. On the other hand, GeForce Experience notes show 5-10% improvements over 347.25 in at least ten other titles at specific settings for GTX 970 and 980. SLI profiles have also been added and/or updated for several other titles, though some of these updates came out previously via GeForce Experience.

The game itself is a rather hefty download, tipping the scales at 26.4GB in Steam (note that Steam lists 50GB as a requirement, but that doesn’t seem to be the case). As you’d expect of a CryEngine title, there are plenty of advanced rendering features available, including DX11 tessellation and particle effects. Interestingly, Evolve will apparently also use some additional GameWorks libraries that have not yet been enabled. The system requirements for Evolve in general look pretty steep, with the GeForce GTX 560 and Radeon HD 5770 being the minimum GPU officially supported, and the GTX 670 and R9 280 being recommended. I’ve done limited testing on GTX 970 and GTX 970 SLI, however, and it looks like the game runs reasonably well on even a single GTX 970 – around 50 FPS at 2560x1440 and Very High settings, or with GTX 970 SLI I averaged 48 FPS at 4K Very High settings. Note however that Evolve seems to be quite demanding on the CPU side, as the 4.1GHz i7-4770K I run seems to be the bottleneck at around 90 FPS.

Gameplay is something of a cross between squad-based shooters like Left 4 Dead with a dash of the old Giants: Citizen Kubuto, in that a squad of up to four players is tasked with taking out a single monster that can also be player-controlled. Or if you prefer, this is an “asymmetrical shooter”. It should also be noted that the developers Turtle Rock Studios are the same team that brought us Left 4 Dead and Left 4 Dead 2, and the core concepts are appear similar in many ways. The game features four game modes: Hunt (kill the monster before it can destroy an objective), Nest (10 minutes to destroy six eggs that may hatch into minions), Rescue (race to save/kill five colonists scattered on the map), and Defend (protect/destroy a ship). There are also Quick Play (a single match) and Evacuation (a five match story mode) options available. While the game is mostly geared towards multi-player gaming, single player offline modes are also available.

Perhaps the biggest issue however isn’t with drivers or performance, but rather it’s DLC. There are quite a few DLC skins as well as additional DLC characters available already, which seems awfully stingy for a game that retails for $60 and apparently only includes twelve maps. Then factor in that even the $25 Evolve Hunter Season Pass only includes the four additional Hunters plus Magma skins for the three core monsters. Or you can get the Evolve PC Monster Race for $100 that adds a fifth playable monster at a later date (while the fourth is coming with a spring 2015 DLC), two more Hunters, and some additional skins – but even this doesn’t seem to include “everything” that exists for the game. Ouch. Good game or not, Evolve is likely to draw a lot of criticism for the overload of day one DLC. Hopefully 2K Games and Turtle Rock Studios follow a similar path to what Valve did with the Left 4 Dead games and provide additional maps/packs as free downloads, but I wouldn’t count on it.

Anyway, 2K’s DLC practices don’t affect the NVIDIA side of the story, which is that they have new drivers that are optimized for the game. If you’ve been looking forward to Evolve and have an NVIDIA GPU, there’s no reason we can see to hold off on updating drivers.