When we ask the motherboard manufacturers about overclocking, most of them say that it is an integral part of their hardware line-up as well as a point to distinguish themselves from the competition. I have been a big fan of the cheaper overclocking oriented models in the mainstream markets, and in order to emulate the success that GIGABYTE has made in that area today they are releasing the X99-SOC Champion aimed at the Haswell-E overclocking crowd. We managed to get a sample in for a launch day review.

Haswell-E Overclocking on the Cheap?

The terms Haswell-E and cheap are rarely seen together. When the base processor in a stack costs $390, nothing is ever that cheap. Nonetheless, users will still build budget type systems and extreme overclockers that are not blessed with sponsorship will want a way in to the most expensive (but highest performing) platform. I say extreme overclockers, such as those with multiple GPUs under water for a home system or competition class under liquid nitrogen, because that is GIGABYTE's market aim with the X99-SOC Champion.

At its heart, this board is a stripped version of the X99-SOC Force, and aims to hit a price point with a feature set that both new and old extreme overclockers can be comfortable with. As part of the marketing campaign for the motherboard, in December GIGABYTE invited several high performing extreme overclockers to their OC Lab at the Taiwan HQ to join in-house overclockers HiCookie and Sofos to break as many records as possible. They came out with 9 world records and 17 other firsts in various benchmark/hardware categories, which is a sizable run for any user familiar with the extreme overclocking scene.

The Issue over an Overclocking Socket

One of the biggest features that extreme overclockers will notice with the X99-SOC Champion is the use of a different socket, similar to the OC Socket used by their biggest competitors. Using the regular LGA2011-3 mountings, this socket contains 2083 pins rather than the standard 2011 and offers several new options for adjusting specific voltages in the BIOS, bypassing the FIVR. 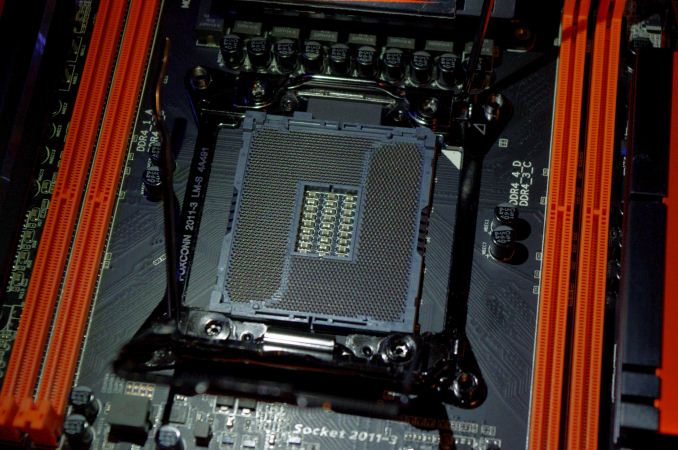 These extra pins are enabled via a DIP Switch onboard, but their relevance is only really towards the liquid nitrogen users. There is also the issue that a form of the OC Socket is in the patent pending stage by ASUS, and we are not sure if GIGABYTE's version infringes on it. Given how rare it is to patent a design in the motherboard industry (compared to the smartphone space, for example), I wonder how aggressively this would be pursued.

Aside from the OC socket, the X99-SOC Champion is still well equipped due to the nature of the X99 platform. For extreme overclocking this means an easy to insulate socket area and motherboard rear, with the onboard buttons allowing for quick resets, voltage checking and BIOS adjustment. New to the GIGABYTE overclocking range is an onboard header for GIGABYTE's X99 overclock panel, although this is sold separately.

For regular users looking for a board to push 24/7, these features may help during the initial setup phase, along with the double width screw safety areas, but the meat of day-to-day functionality will revolve around the IO. GIGABYTE implements a full bandwidth four-way GPU setup, giving x16/x16/x8 and x8/x8/x16/x8, along with the full set of 10 PCH SATA ports, a SATA Express port and an M.2 2.0 x4 slot. The board also gets six USB 3.0 in total, a Thunderbolt header and three PCIe 2.0 x1 slots, although some of these share bandwidth with the M.2. On the networking and audio front, an Intel I218-V network port is teamed with GIGABYTE's AMP-UP audio solution, giving an upgraded Realtek ALC1150 experience. This area of the motherboard also lights up to enhance the aesthetic of the product.

My main concern with GIGABYTE is still the BIOS - while the classic mode has been updated, the HD mode is still somewhat difficult to use at speed based on color clash. It speaks volumes when overclockers still use the classic mode instead. The enabling of the LGA2083 pins offers several new voltage options, which GIGABYTE states that they help with DRAM and uncore overclocking. On the plus side, I like GIGABYTE's software package - it has been steadily evolving and the App Center approach does simplify some tasks that other manufacturers make convoluted.

In our benchmark results, the lack of multicore turbo on our early BIOS resulted in less than stellar stock performance, although for an overclocking board this doesn't matter that much. On the system benchmark side, unlike the other GIGABYTE X99 boards tested we managed to get an audio result although at a lower output volume. USB performance was not that impressive, but the GIGABYTE X99-SOC Champion does well in power consumption and POST times compared to other X99 motherboards we have tested with ~200W at CPU load and under 20 seconds respectively.

A big deciding factor for the X99-SOC Champion will be the price - at the time of writing the MSRP has not been set. For the Z97 platform, $200 is around the budget OC market, so X99 will be above that. At $250 the Champion will be a winner, and at $300 it will still be a reasonable consideration for extreme overclockers. But I would assume that the full-bandwidth four-way design, the LGA2083 socket variant and extra gold content in the socket and slots does not come cheap.

Part of moving towards a liquid cooling system or even sub-zero cooling is the lack of airflow around the motherboard. In sub-zero cooling usually a fan is added to help move away moisture and LN2 vapor, but with water cooling unless the case has some form of airflow there is little flow focused specifically on the motherboard. For this purpose, it is useful to have large motherboard heatsinks connected via heatpipes, and this is what the X99-SOC Champion has. There are four separate heatsinks in total, with two of them taking advantage of the fewer DDR4 memory slots on the system. While the heatsinks are optimized for looks and one could argue that the surface area is not as optimum as it could be, the fact that they are joined together helps the overall performance between them. 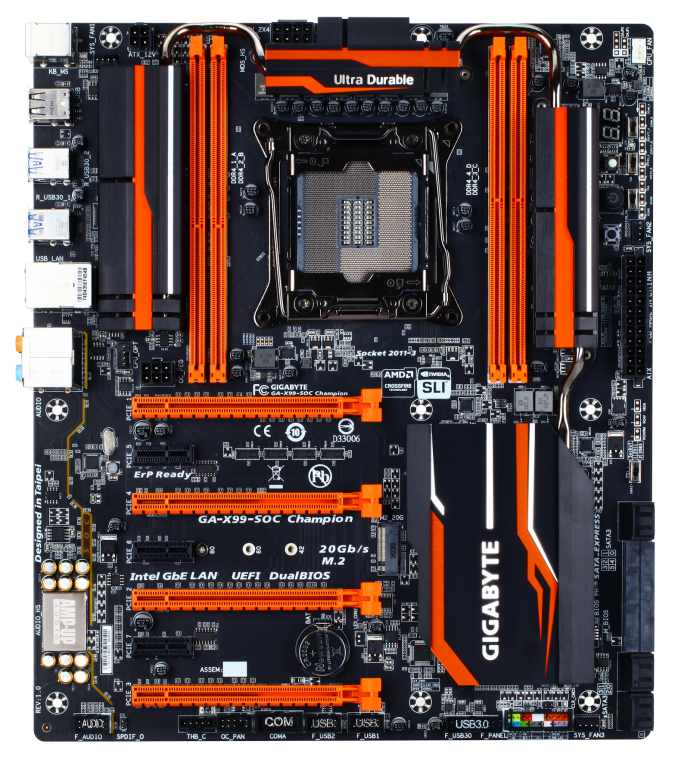 The socket area is relatively clean for sub-zero preparation, and for those that do want fans then the socket area has access to four in its immediate vicinity: the 4-pin CPU header at the top right, a 4-pin CPU-OPT header below the heatsink on the left, a 4-pin SYS header on the top left and another 4-pin SYS header above the 24-pin ATX connector. The final four-pin header is on the bottom of the motherboard. Due to the OC styling all the heatsinks and slots are in orange with the PCB separation indicator of the audio side of the motherboard also orange with underside LEDs shining through when the system is powered on.

On the top right of the motherboard a cut down version of GIGABYTE’s OC Buttons are here, including power/reset buttons, a two-digit debug, voltage read points, a BIOS selection switch, a DualBIOS enabling switch, an OC Trigger Switch (LN2 Mode) and to the far left is the LGA2083 enabling switch. 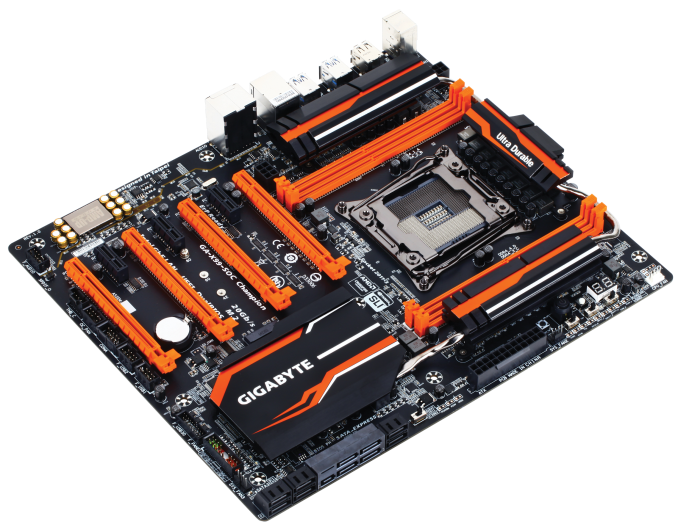 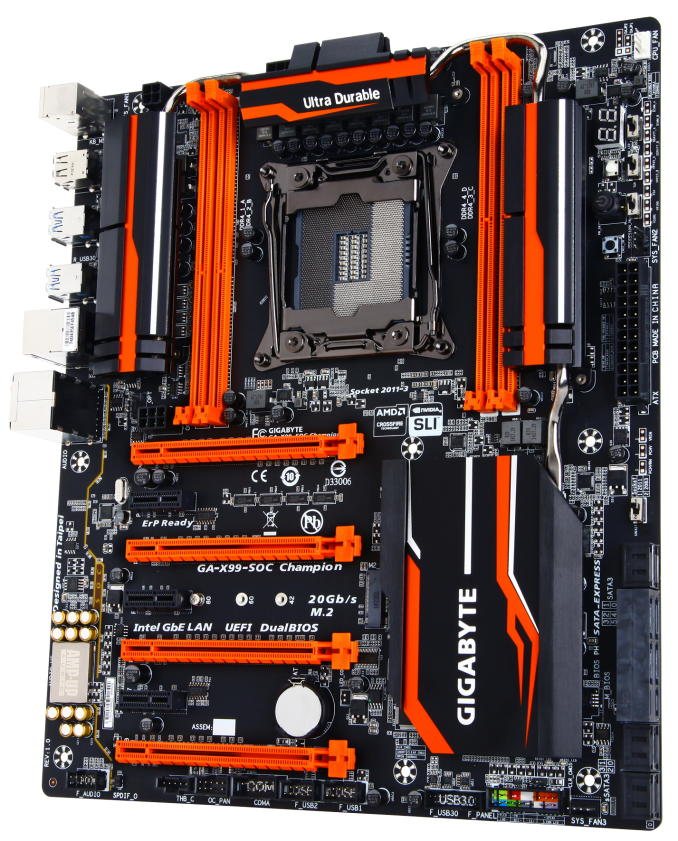 The bottom of the motherboard gives front panel audio, the Thunderbolt header, GIGABYTE’s OC Panel header, a COM header, two USB 2.0 headers, a USB 3.0 header and the front panel header. Above these are the PCIe slots, which use a full-bandwidth layout to maximize non-PLX enhanced GPU bandwidth.

A standard four-way design, due to the way the LGA2011-3 CPUs are designed, limits the bandwidth to x8/x8/x8/x8 without additional timing circuits. Adding these circuits enables a full 320 Gbps from the CPU, but obviously incurs a little extra cost.