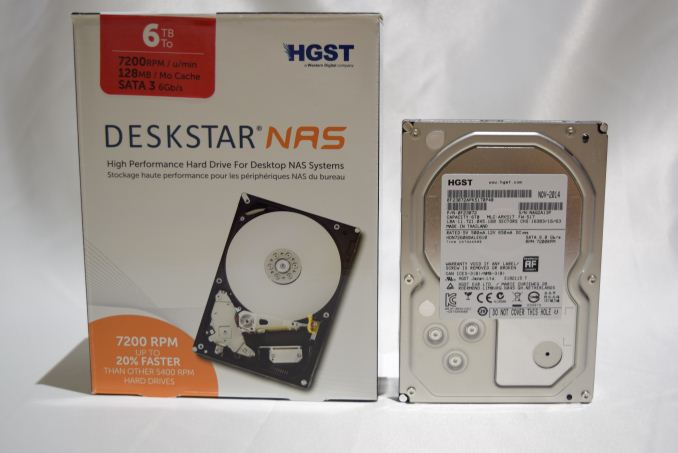 The traditional market for hard drives (PCs and notebooks) is facing a decline due to the host of advantages provided by SSDs. However, the explosion in the amount of digital content generated by the households and businesses has resulted in the rapid growth of the SMB / SOHO / consumer NAS market. Hard drive vendors have jumped on to this opportunity by tweaking the firmware and manufacturing process of their drives to create lineups specifically suited for the NAS market.

We have already had comprehensive coverage of a number of 4 TB NAS drives and a few 6 TB ones. Earlier this month, Seagate also introduced their WD Red Pro competitor, the Enterprise NAS HDD. We reviewed the 6 TB version and it turned out to be a great performer, albeit a bit costly for regular consumers. HGST aims to fill that space with the 6 TB Deskstar NAS. It falls in the same market category as the WD Red. However, the HGST Deskstar NAS drives have a 7200 RPM rating and the 5 / 6 TB variants come with 128 MB of DRAM cache. This is expected to make them perform closer to the Seagate Enterprise Capacity v4 and Enterprise NAS HDD drives. In the remainder of the review, we will try to determine whether that is the case.

Prior to proceeding with the actual review, it must be made clear that the above drives do not target the same specific market. For example, the WD Red and the HGST Deskstar NAS units are for 1- 8 bay NAS systems in the tower form factor. The Seagate Enterprise NAS HDD is meant for rackmount units up to 16 bays, but is not intended to be a replacement for drives such as the Enterprise Capacity v4. The Ultrastar He6 is targeted towards datacenters where its storage density and power efficiency lead to a lower overall TCO.