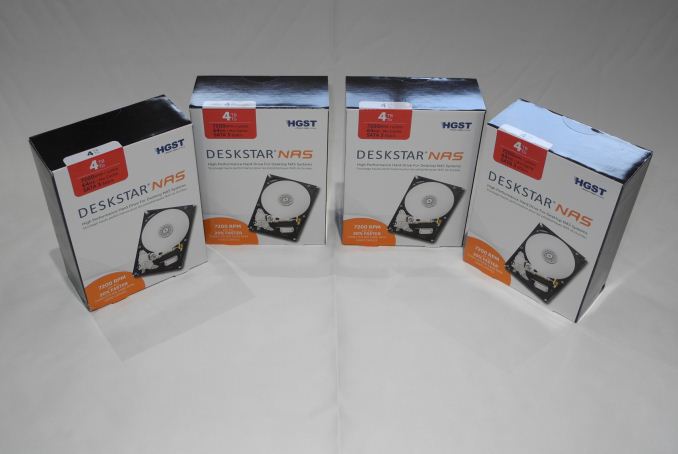 The traditional market for hard drives (PCs and notebooks) is facing a decline due to the host of advantages provided by SSDs. However, the explosion in the amount of digital content generated by households and businesses has resulted in the rapid growth of the SMB / SOHO / consumer NAS market. Hard drive vendors have jumped on to this opportunity by tweaking the firmware and manufacturing process of their drives to create lineups specifically suited for the NAS market.

We have already had comprehensive coverage of a number of 4 TB NAS drives and a few 6 TB ones. One of the drives that we couldn't obtain in time for our initial 4 TB roundup was the HGST Deskstar NAS. After getting sampled last month, we put the 4 TB version of the HGST Deskstar NAS through our evaluation routine for NAS drives. While most of our samples are barebones, HGST sampled us their retail kit, which includes mounting screws and an installation guide.

Prior to proceeding with the actual review, it must be made clear that the above drives do not target the same specific market. For example, the WD Red and Seagate NAS HDD are for 1- 8 bay NAS systems in the tower form factor. The WD Red Pro is meant for rackmount units up to 16 bays, but is not intended to be a replacement for drives such as the WD Re. Seagate Constellation ES.3, Seagate Enterprise Capacity v4 and the Toshiba MG03ACA400 which target enterprise applications requiring durability under heavy workloads. The WD Se and the Seagate Terascale target the capacity-sensitive cold storage / data center market.

The HGST Deskstar NAS is supposed to slot in-between the WD Red and the WD Red Pro. It doesn't specify an upper limit on the number of bays, but mentions only desktop form factor systems. Like other NAS drives, it is rated for 24x7 operation and includes a rotational vibration sensor for increased reliability.