We've seen our first taste of Huawei's direction in UI design in my Honor 6 review. With the Mate 7 Huawei also introduced their new design language and overhaul of Emotion UI. Version 3.0 is basically a complete fresh take in terms of looks while still keeping the additional functionality that Huawei seems to be very good at to differentiate themselves from other vendors. 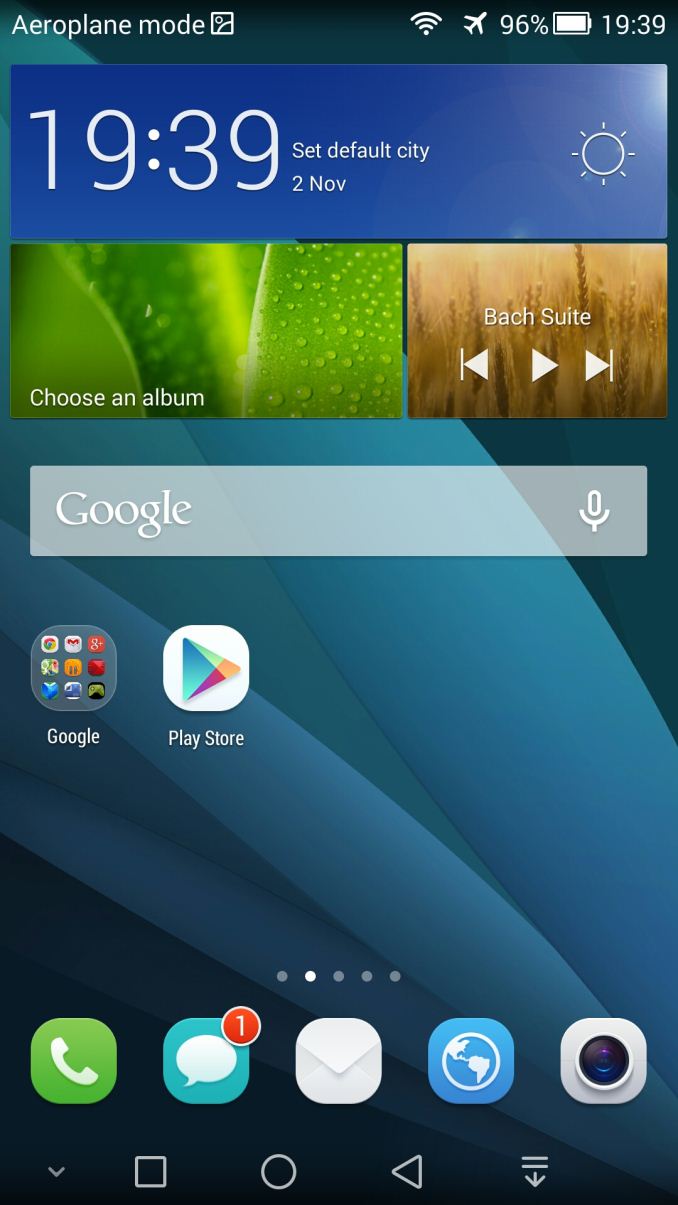 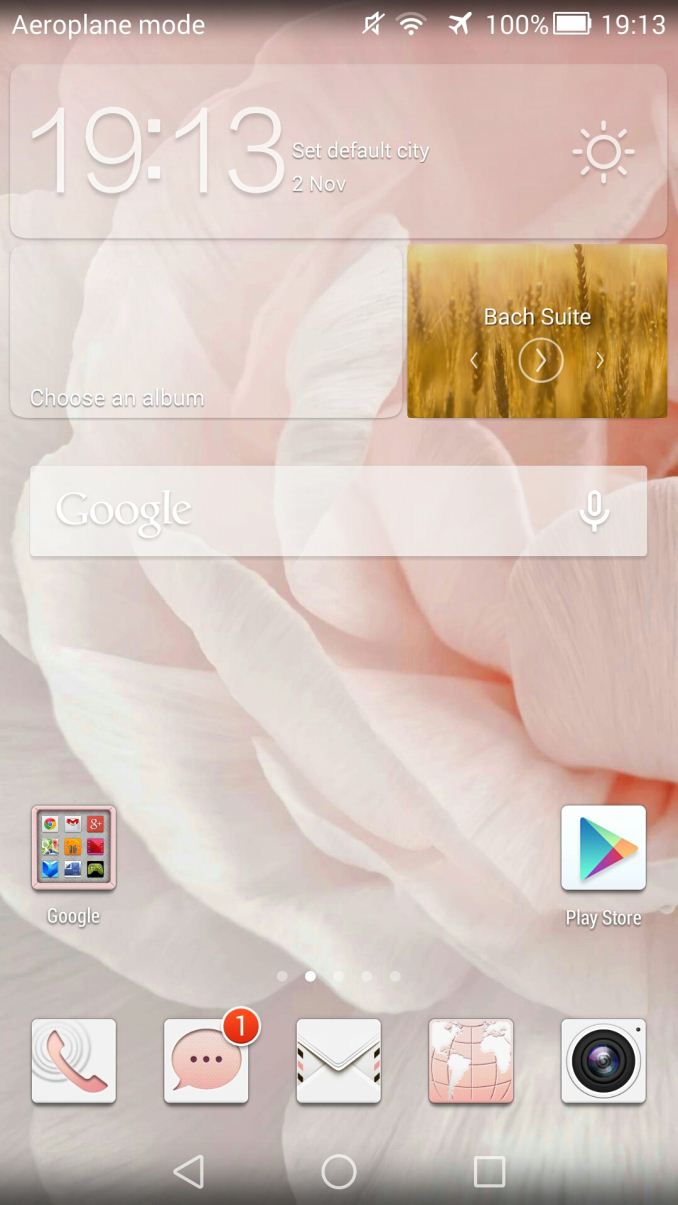 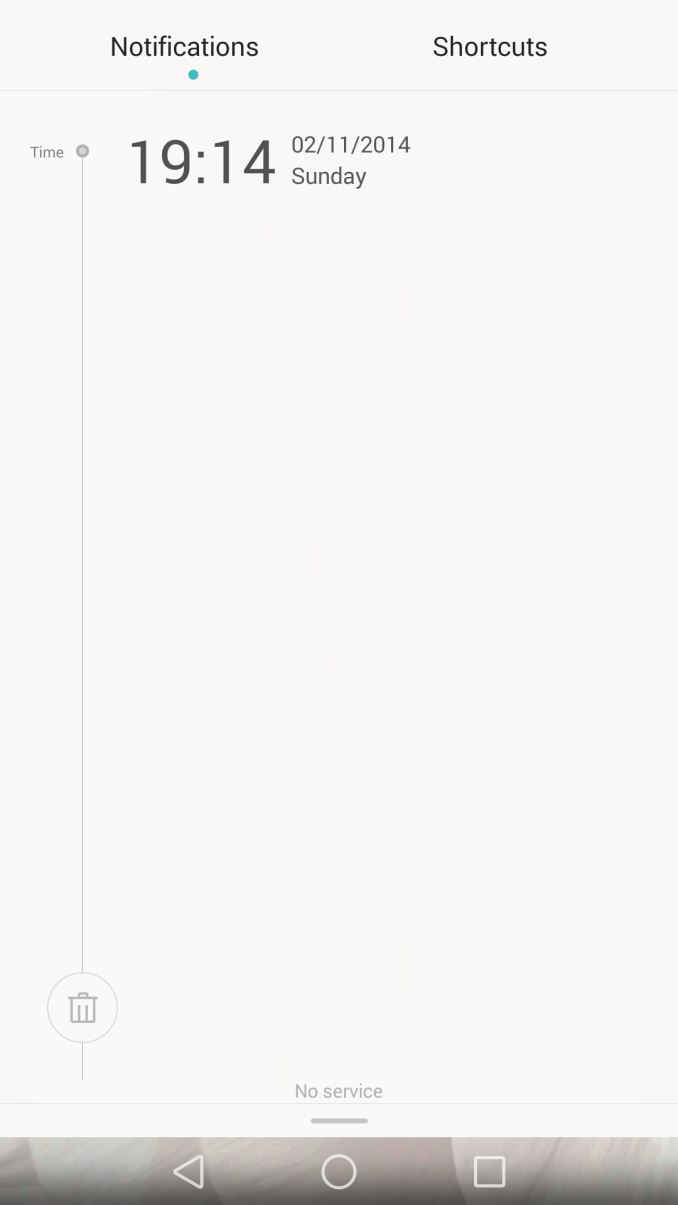 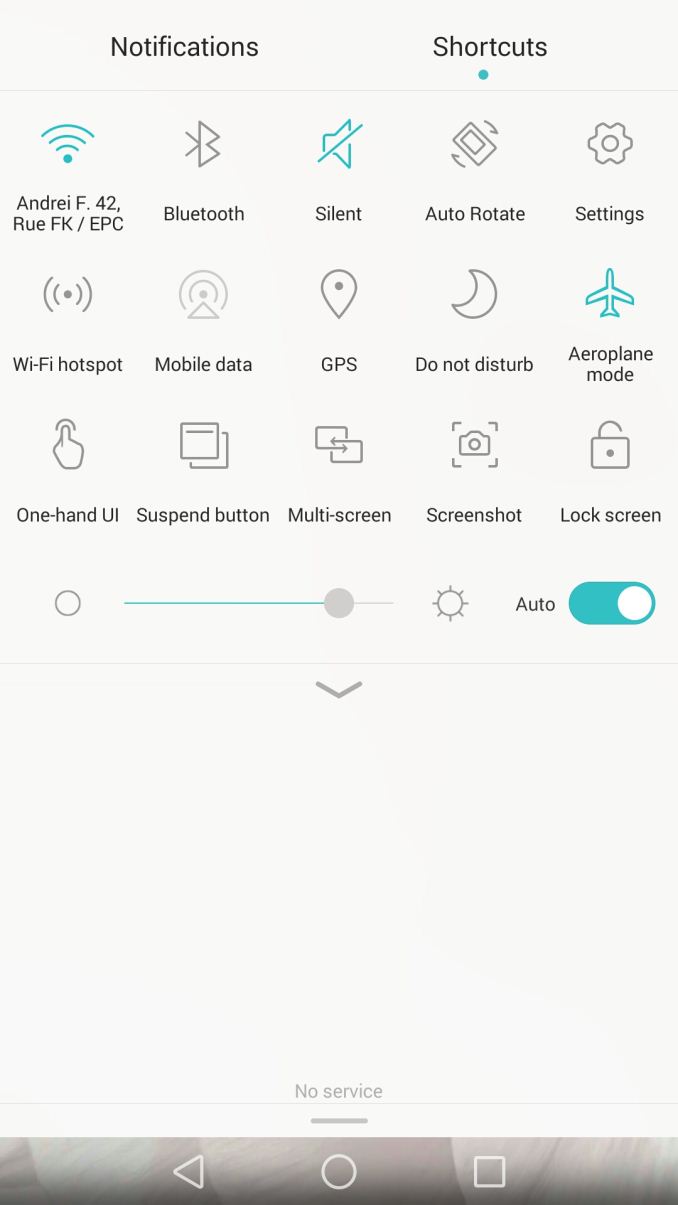 The basic skin that covers the notification shade and the settings menus employs a very minimalistic and white colour scheme. Simplistic icons throughout the interface offer one of the more conservative interface experiences on Android. I'd even be pressed to say that I preferred the more colourful icons in EmUI 2.3 as they added more diversity. This might not be at all an issue to most users as the main interface and colours in most applications is determined by the user applied theme.

The phone comes with a theme manager and allows for download of a wide variety of skins offered in its online browsing catalogue. Themes now also are able to set basic colour schemes of the built-in applications, meaning there's something there for everybody's taste. 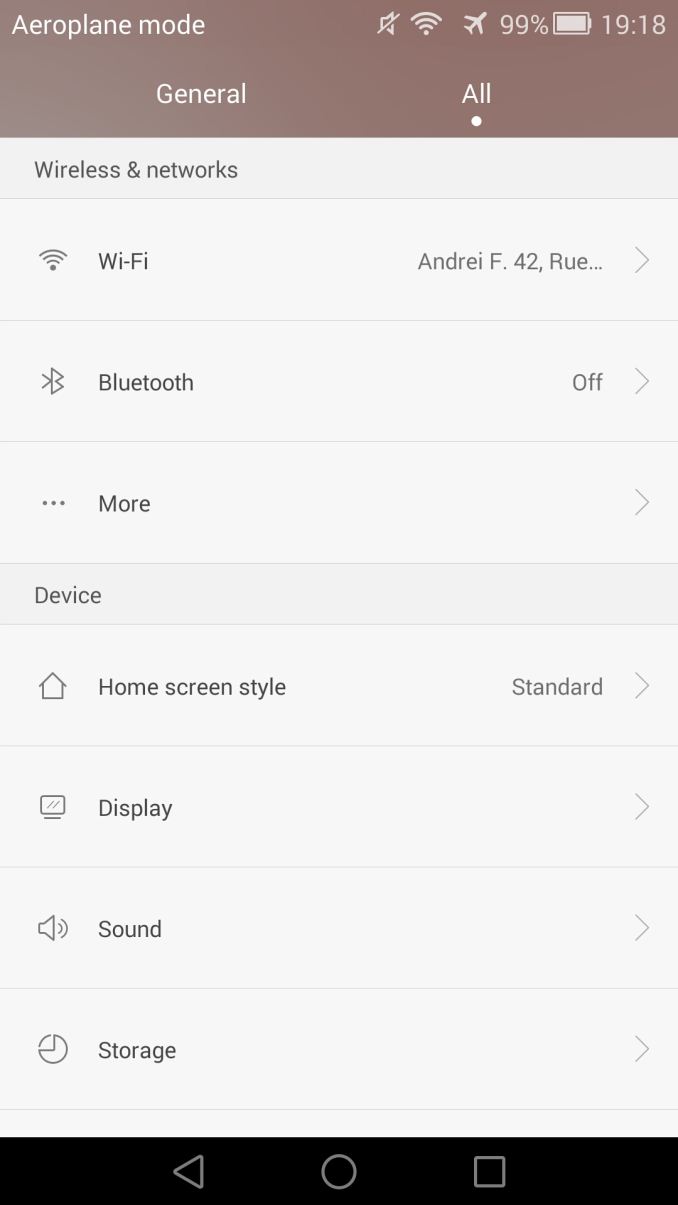 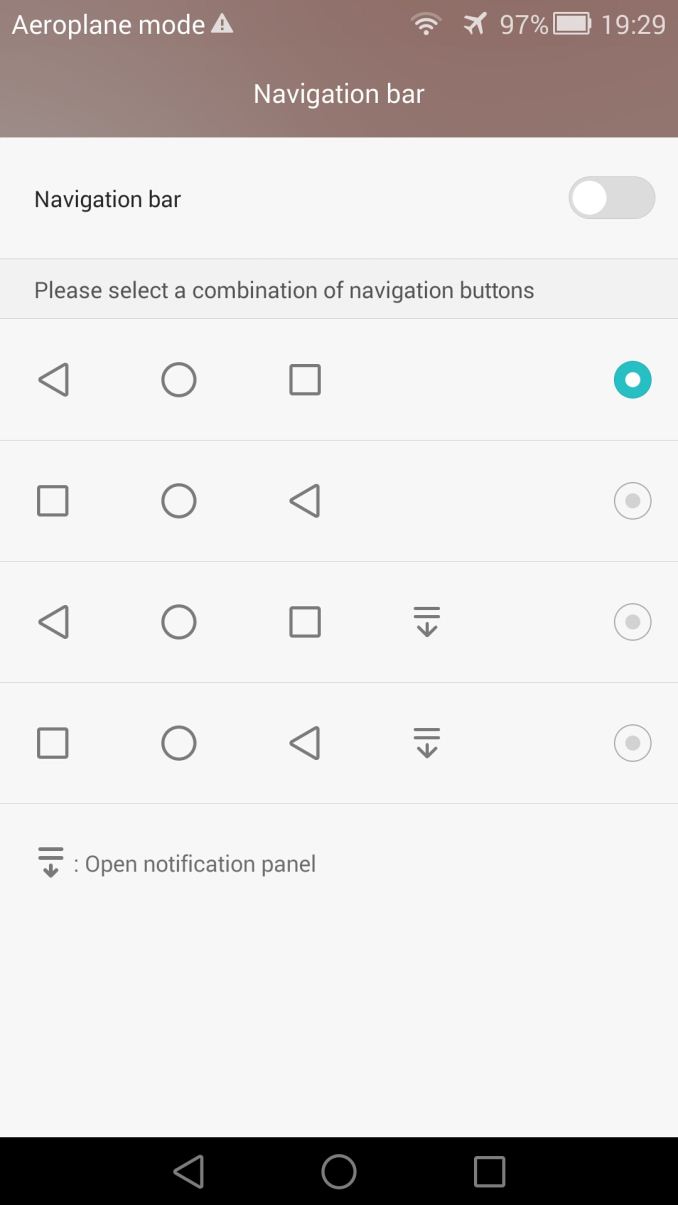 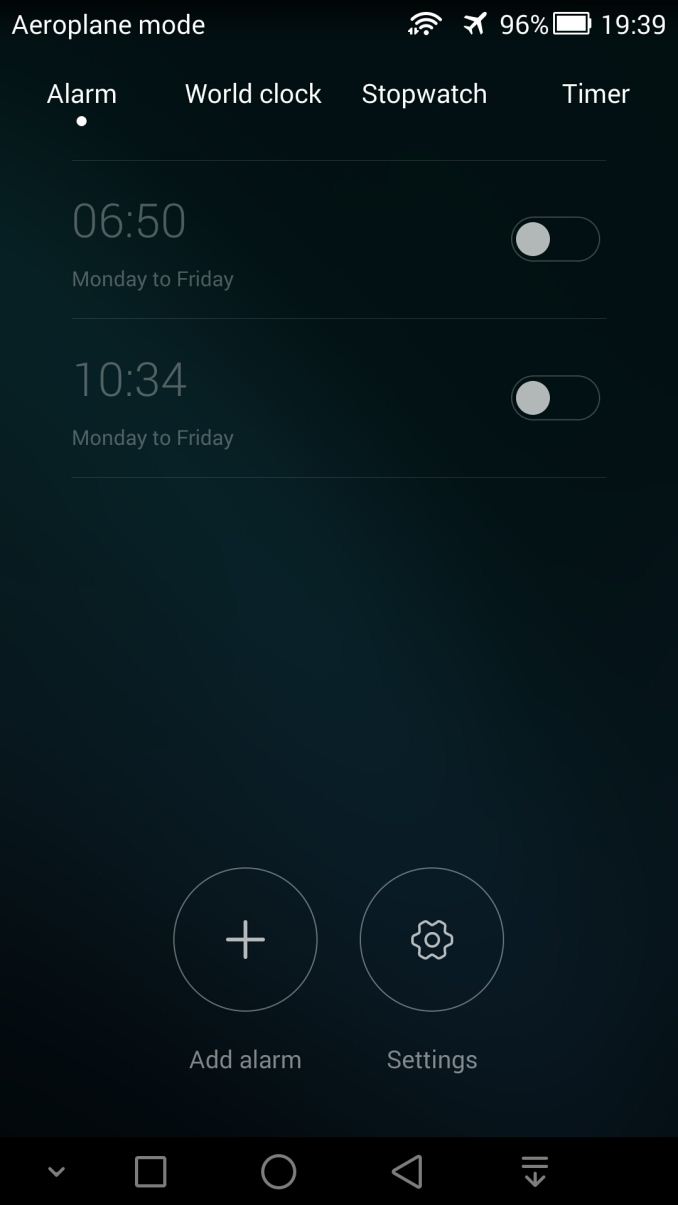 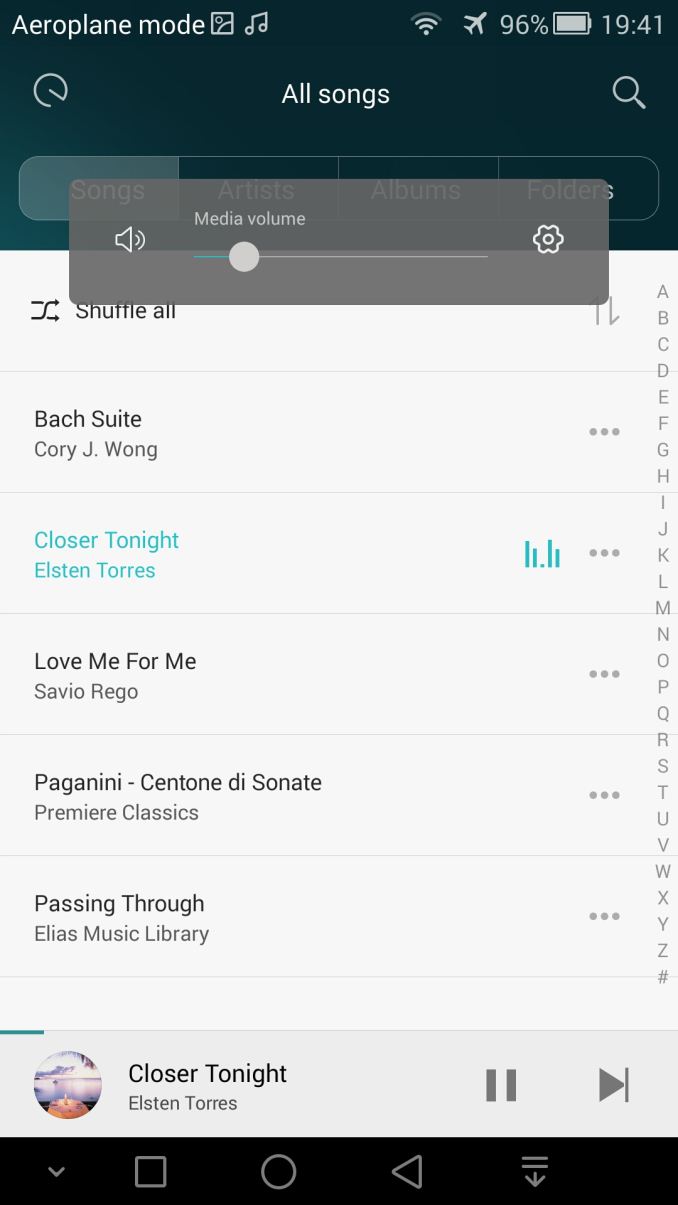 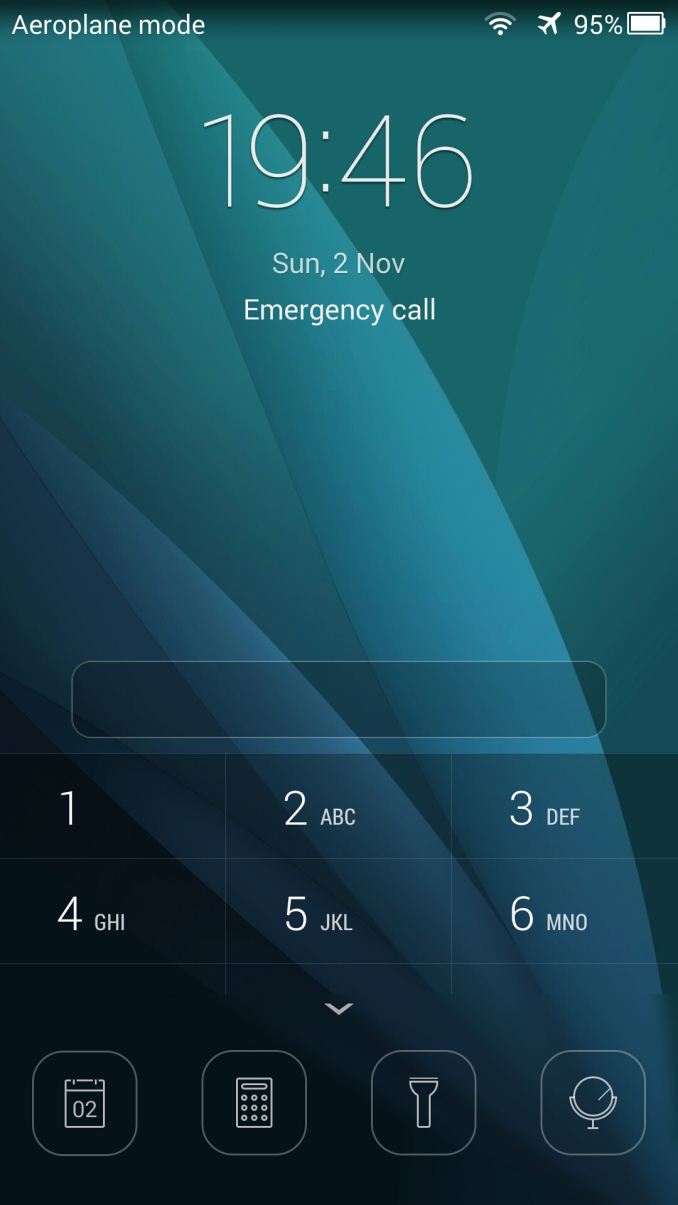 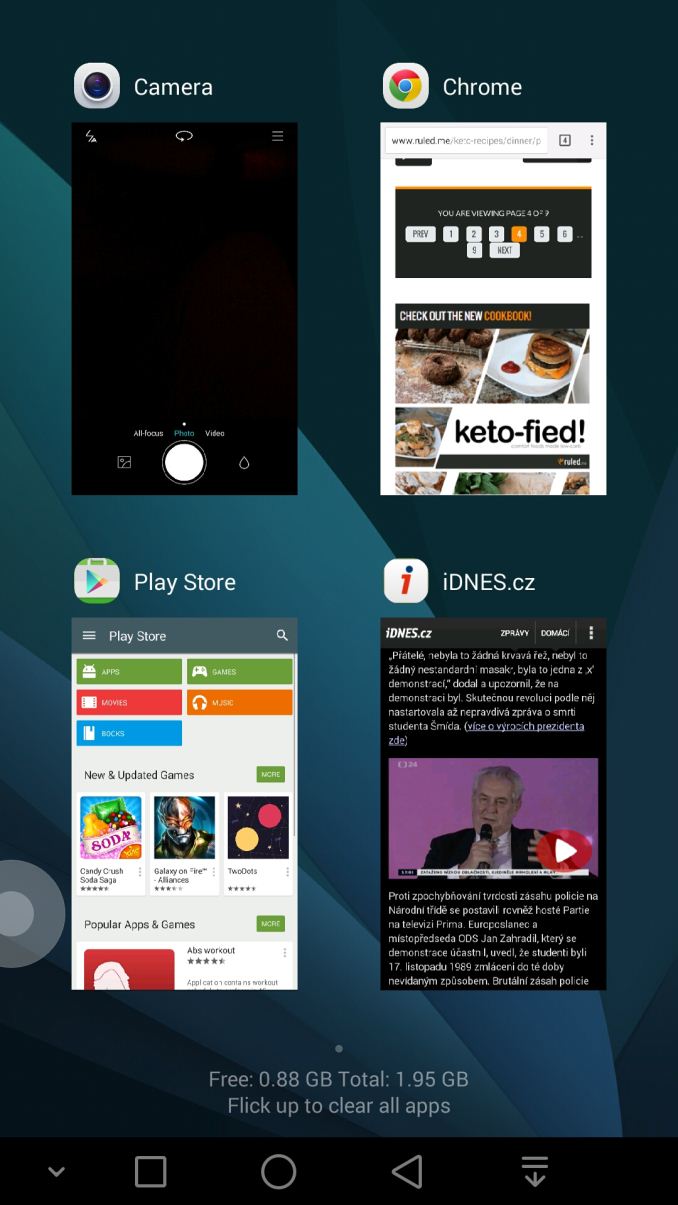 The recent tasks menu has also received a unique design, instead of having a linear list of screen caps or a card design as found in Android 5.0, Huawei offers a "tabbed" interface, showing 4 applications per screen and swipeable screens to be able to scroll through the tab windows. Swiping a tab up closes the application, swiping it down locks it from being closed by the memory manager. Alternatively you can swipe from the bottom of the screen to close all apps.

I find this very convoluted and actually impractical compared to the stock Android recent tasks screen, it adds nothing in terms of usability and even prevents you from quickly reaching an application which was less recently used as you have to swipe screens to search for it. 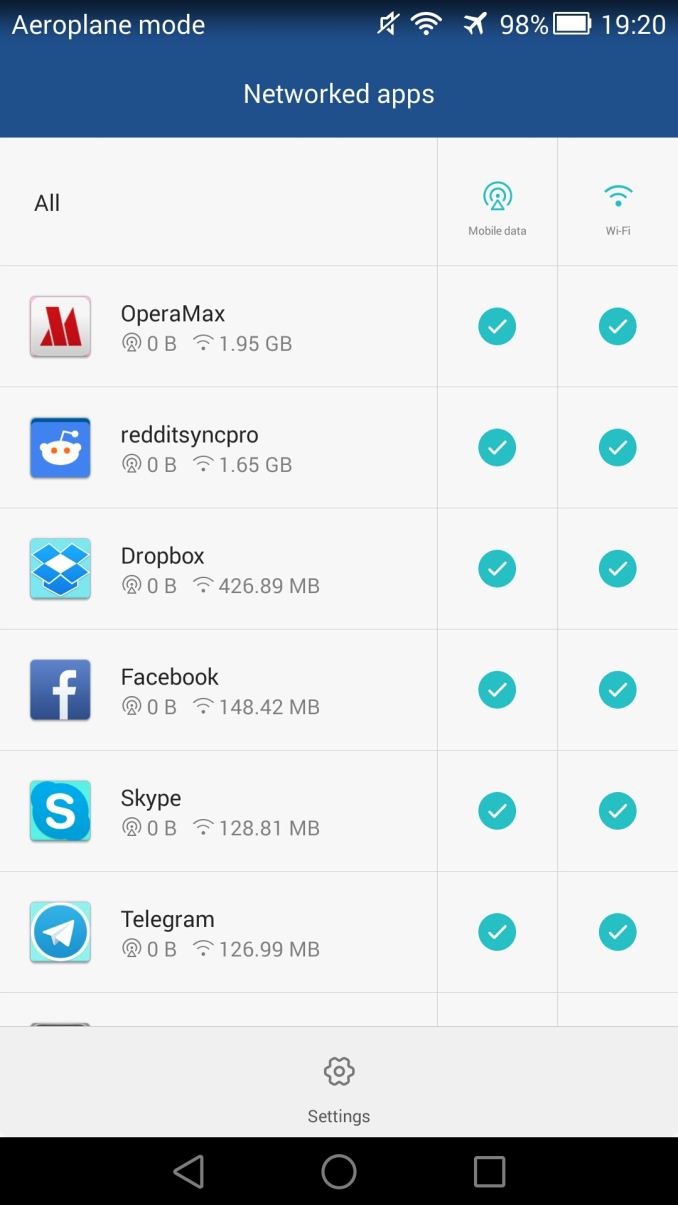 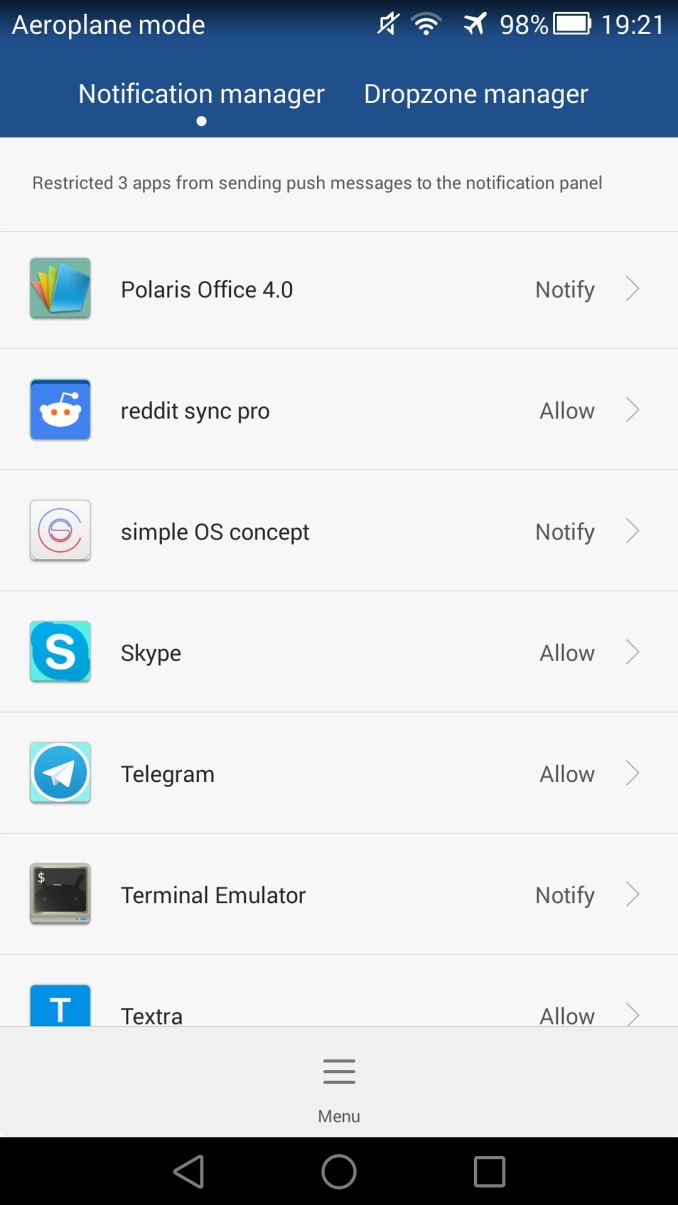 I've praised Huawei's modification of Android in EmUI 2.3 - luckily we find the same functionality again here in EmUI 3.0. Huawei provides fine-granularity controls over installed applications on the phone. As such, you're able to determine network access (WiFi or mobile data) on a per-app basis in the Network Manager, while also monitoring their data usage. A Notification Manager enables you to control which applications are allowed to push notifications to the system, giving the possibility to have apps prompt, or directly whitelist or blacklist them.

The Permission Manager is also extremely competent, almost totally foregoing Android's built-in permission settings. You can have an application prompt for specific permissions whenever they actually need them, and accept or deny them on a per-app, per-permission basis. The Android app ecosystem has an issue with applications requesting a lot of, sometimes dubious permissions. I see this as Huawei's attempt at alleviating user concerns about security. For those who think this might be a too bothersome system - I strongly disagree; it is not very intrusive, while still being able to provide lots of power of control.

The Battery and Power Consumption managers again offer lots of information - Huawei seems to be very strict in trying to reign in power abusive and misbehaving applications. If you have an application which is running in the background and taking up a more-than normal amount of CPU cycles a notification warning will tell you about it and give you the possibility to kill the app. A manager dedicated to listing the background power of all applications on the phone enables you to identify power drains. 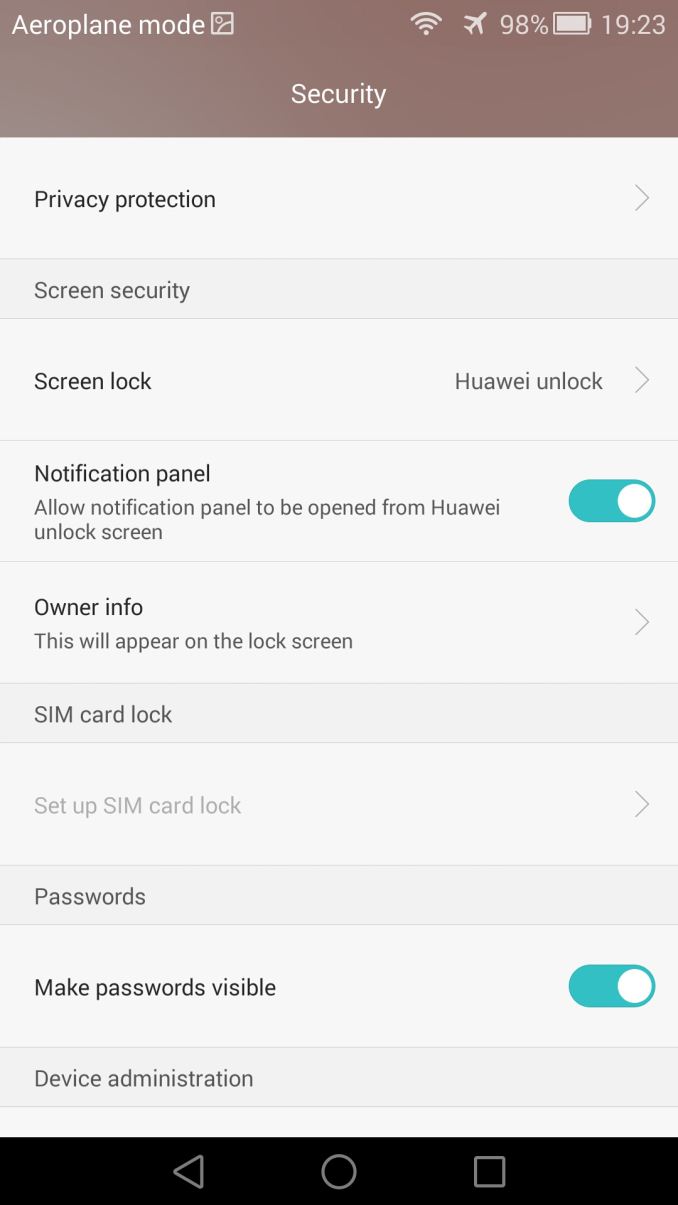 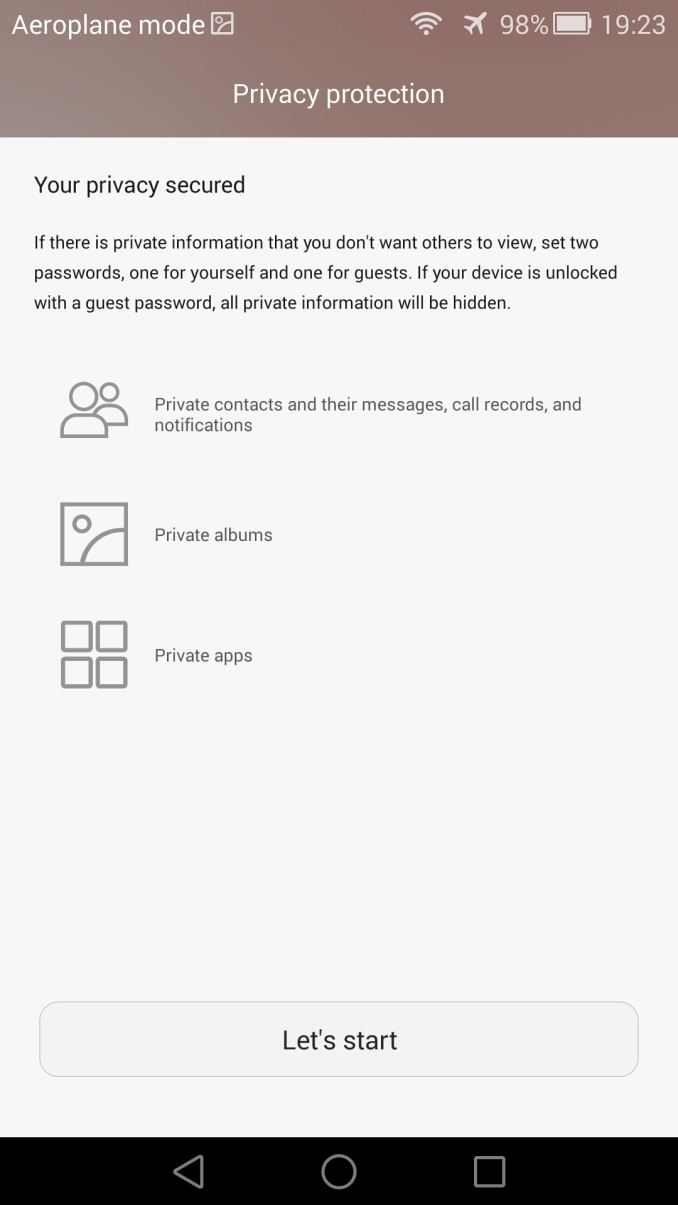 The album and application locking mechanisms is what I see people actually would be using pretty often. Being able to lock certain parts of your phone while still being able to not fear to give your phone to your friend or family member is a great feature that should avoid many embarrassing moments for some people. How it works is that the OS asks for a fingerprint scan (or passcode fallback) any time you access a given album or application.

Overall Huawei offers a lot in terms of software. EmotionUI 3.0 is a great overhaul over version 2.3 and might subjectively be one of the more attractive Android OEM skins. Aside from the recent tasks screen I don't have much critique in terms of functionality of the OS. Huawei continues to pack in unique features into the OS without affecting performance or overly bloating the device.