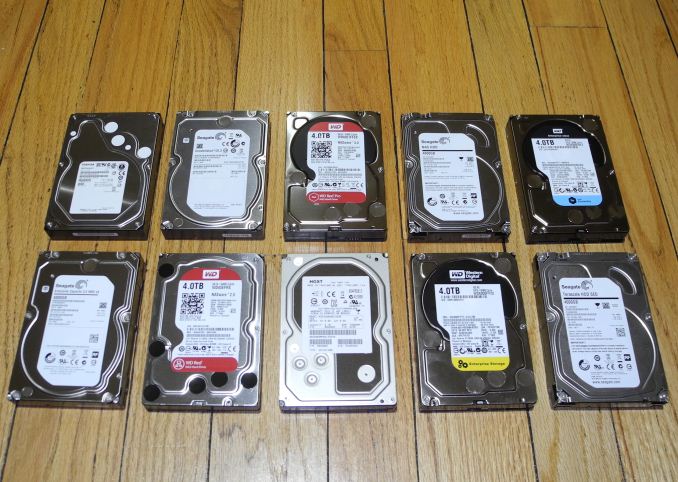 A couple of weeks back, Western Digital updated their NAS-specific drive lineup with 5 and 6 TB Red drives. In addition, 7200 RPM Red Pro models with 2 - 4 TB capacities were also introduced. We have already looked at the performance of the WD Red, and it now time for us to take the WD Red Pro for a spin. In our 4 TB NAS drive roundup from last year, we also indicated that efforts would be taken to add more drives to the mix along with an updated benchmarking scheme involving RAID-5 volumes. The Red Pro gives us an opportunity to present results from the evaluation of various drives that have arrived in our labs since then.

The SMB / SOHO / consumer NAS market has been experiencing rapid growth over the last few years. With declining PC sales and increase in affordability of SSDs, hard drive vendors have scrambled to make up for the deficit and increase revenue by targeting the NAS market. The good news is that the growth is expected to accelerate in the near future (thanks to increasing amounts of user-generated data through the usage of mobile devices). In addition, security threats such as SynoLocker have also underscored the necessity of frequent backups.

Back in July 2012, Western Digital began the trend of hard drive manufacturers bringing out dedicated units for the burgeoning SOHO / consumer NAS market with the 3.5" Red hard drive lineup. The firmware was tuned for 24x7 operation in SOHO and consumer NAS units. 1 TB, 2 TB and 3 TB versions were made available at launch. Later, Seagate also jumped into the fray with a hard drive series carrying similar firmware features. Over the last two years, the vendors have been optimizing the firmware features as well as increasing the capacities. On the enterprise side, hard drive vendors have been supplying different models for different applications, but all of them are quite suitable for 24x7 NAS usage. While mission-critical applications tend to use SAS drives, it is the nearline SATA versions that are more suitable for home / SMB users. These enterprise drives provide better reliability / longer warranties compared to the NAS-specific WD Red and the Seagate NAS HDD lineups.

The correct choice of hard drives for a NAS system is influenced by a number of factors. These include expected workloads, performance requirements and power consumption restrictions, amongst others. In this review, we will discuss some of these aspects while evaluating ten different hard drives targeting the NAS market. One of the most glaring omissions in our list is HGST's Deskstar NAS. Due to HGST's strange sampling scheme, we are still trying to obtain enough drives for our NAS-specific benchmkaring, but they did send us their 4 TB SAS drive for participation in this roundup. Other than the HGST SAS drive, the other nine drives all carry a SATA interface.

The above drives do not target the same specific market. For example, the WD Red and Seagate NAS HDD are for 1- 8 bay NAS systems in the tower form factor. The WD Red Pro is meant for rackmount units up to 16 bays, but is not intended to be a replacement for drives such as the WD Re, Seagate Constellation ES.3, Seagate Enterprise Capacity v4 and the Toshiba MG03ACA400 which target enterprise applications requiring durability under heavy workloads. The WD Se and the Seagate Terascale target the capacity-sensitive cold storage / data center market.

Unlike our previous evaluation of 4 TB drives, we managed to obtain enough samples of the new drives to test them in a proper NAS environment. As usual, we will start off with a feature set comparison of the various drives, followed by a look at the raw performance when connected directly to a SATA 6 Gbps port. In the same PC, we also evaluate the performance of the drive using some aspects of our direct attached storage (DAS) testing methodology. For evaluation in a NAS environment, we configured three drives of each model in a RAID-5 volume and processed selected benchmarks from our standard NAS review methodology. Since our NAS drive testbed supports both SATA and SAS drives, but our DAS testbed doesn't, the HGST SAS drive was not subject to any of the DAS benchmarks. We plan to carry more detailed coverage of the HGST SAS unit in a future SAS-specific roundup.