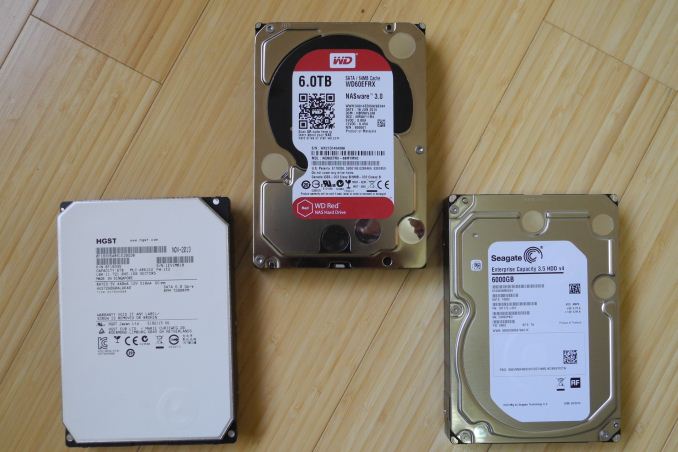 The SMB / SOHO / consumer NAS market has been experiencing rapid growth over the last few years. With declining PC sales and increase in affordability of SSDs, hard drive vendors have scrambled to make up for the deficit and increase revenue by targeting the NAS market. The good news is that the growth is expected to accelerate in the near future (thanks to increasing amounts of user-generated data through the usage of mobile devices).

Back in July 2012, Western Digital began the trend of hard drive manufacturers bringing out dedicated units for the burgeoning SOHO / consumer NAS market with the 3.5" Red hard drive lineup. The firmware was tuned for 24x7 operation in SOHO and consumer NAS units. 1 TB, 2 TB and 3 TB versions were made available at launch. Later, Seagate also jumped into the fray with a hard drive series carrying similar firmware features. Over the last two years, the vendors have been optimizing the firmware features as well as increasing the capacities. On the enterprise side, hard drive vendors have been supplying different models for different applications, but all of them are quite suitable for 24x7 NAS usage. For example, the WD Re and Seagate Constellation ES are tuned for durability under heavy workloads, while the WD Se and Seagate Terascale units are targeted towards applications where scalability and capacity are important.

Usually, the enterprise segment is quite conservative when it comes to capacity, but datacenter / cloud computing requirements have resulted in capacity becoming a primary factor to ward off all-flash solutions. HGST, a Western Digital subsidiary, was the first vendor to bring a 6 TB hard drive to the market. The sealed Helium-filled HDDs could support up to seven disks (instead of the five usually possible in air-filled units), resulting in a bump up to 6 TB in the same height as traditional 3.5" drives. Seagate adopted a six-platter design for the Enterprise Capacity v4 6 TB version. Today, Western Digital launched the first NAS-specific 6 TB drive targeting SOHO / home consumers, the WD Red 6 TB. In expanding their Red portfolio, WD provides us an opportunity to see how the 6 TB version stacks up against other offerings targeting the NAS market.

The correct choice of hard drives for a NAS system is influenced by a number of factors. These include expected workloads, performance requirements and power consumption restrictions, amongst others. In this review, we will discuss some of these aspects while evaluating three different hard drives targeting the NAS market:

Each of these drives target slightly different markets. While the WD Red is mainly for SOHO and home consumers, the Seagate Enterprise Capacity targets ruggedness for heavy workloads while the HGST Ultrastar aims for data centers and cloud storage applications with a balance of performance and power efficiency.

Unlike our previous evaluation of 4 TB drives, we managed to obtain enough samples of the new drives to test them in a proper NAS environment. As usual, we will start off with a feature set comparison of the three drives, followed by a look at the raw performance when connected directly to a SATA 6 Gbps port. In the same PC, we also evaluate the performance of the drive using some aspects of our direct attached storage (DAS) testing methodology. For evaluation in a NAS environment, we configured three drives in a RAID-5 volume and processed selected benchmarks from our standard NAS review methodology.