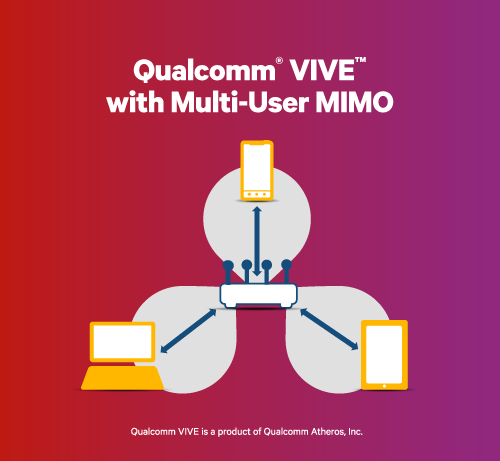 At the beginning of 2012 Broadcom announced its first 802.11ac chipsets under the banner of 5G (5th generation) WiFi. Since then we've seen the latest high end notebooks adopt 802.11ac, as well as a handful of flagship smartphones and tablets. The first generation of 802.11ac devices brought 80MHz channels and 256-QAM to a 5GHz interface that enabled real transfer speeds of as much as 600/900Mbps (TCP/UDP) for a 3-antenna/3-stream solution.

The first point increases max PHY rate with 80MHz channels to 1.73Gbps (up from 1.33Gbps for a 3-stream/80MHz solution). The second feature can further increase performance, while the third feature is the one we really want to talk about today.

The difference between SU-MIMO (Single User MIMO) and MU-MIMO (Multi User MIMO) is pretty simple. In the SU case, each device gets full exclusive access to the AP's bandwidth for a given timeslice before moving on to the next one. This works beautifully for many-stream MIMO devices (e.g. a 3x3 3-stream notebook) as each device can easily use up all of the bandwidth the AP has to offer. In reality though, you're likely to have a number of devices attached to the network that support only 1 or 2 streams (think: tablets or smartphones). In the case of a SU-MIMO network with a 3 or 4 stream 802.11ac AP and a bunch of 1 or 2-stream clients, you'll end up with a lot of unused bandwidth capacity on the AP for any given timeslice. Each device is served sequentially, and a single stream device can only use a fraction of the AP's total bandwidth. This really becomes a problem when you oversubscribe the AP (e.g. think of the coffee shop or airport use case).

With MU-MIMO however it is possible to form groups of multiple devices that can be served at the same time. Through beam forming a MU-MIMO access point can group together multiple MU-MIMO aware devices into a single transmission slot. In the case of a 4x4 MU-MIMO AP, grouping even three clients in the same transmission slot would greatly increase the efficiency of the network - allowing it to support even more connected clients.

Today Qualcomm is announcing its complete lineup of MU-MIMO enabled WiFi chipsets. There are four chipsets on the infrastructure side (think: APs) and four on the client side. You need both to get the full benefits, but as long as you have a MU-MIMO AP and some MU-MIMO clients even SU-MIMO clients will benefit from the improved efficiency on the network.

None of the MU-MIMO solutions support 160MHz channels, but through the addition of a fourth stream on some solutions we get max link rates of 1.73Gbps. You'll notice some feature overlap between the enterprise and residential AP solutions, the only difference there is really on the feature side as enterprise APs tend to be a bit more specific in their requirements.

On the device side, Snapdragon 801 platforms that use Qualcomm's integrated 1-stream 802.11ac WiFi will already support MU-MIMO with nothing more than a software update (the device vendor needs to actually offer that update however). The QCA6174 will be the 2-stream MU-MIMO 802.11ac discrete solution to keep an eye out for in tablets/smartphones.

Enabling MU-MIMO is a big deal for improving the carrying capacity of larger 802.11ac networks. For the sake of having a good experience on public networks, I do hope that when we eventually see the shift to 802.11ac in more places we'll see it happen with MU-MIMO APs. Qualcomm isn't expecting announcements based around any of these solutions until the end of this year at the earliest, with product availability sometime in Q1 next year.