First impressions of the Sony VAIO Pro 13 are good if not exceptional, and I definitely like the look of the laptop. Sony has gone with a very thin chassis that uses carbon fiber, and it’s one of the thinnest Ultrabooks around (though not quite as thin as the Acer S7). Unfortunately, the choice of materials and the thinness feels a bit too flexible to me. Sony would counter by saying that a bit of flex rather than bending or breaking is a good thing, and that the added weight of more rigid materials is undesirable; some people will agree with them. I personally like something that feels a bit more solid, but the VAIO Pro 13 isn’t so far off that I wouldn’t at least give it some thought. 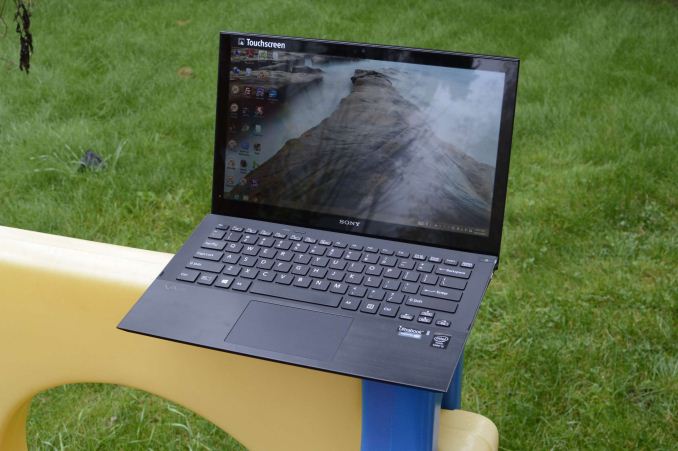 As far as the subjective evaluation goes, I’m happy to report that the keyboard works well and other than the lack of dedicated document navigation keys I have no real complaints. Considering how thin the VAIO Pro chassis is, I wondered if the keyboard would suffer. Thankfully, unlike the Acer S7 it’s still a comfortable typing experience. Key travel is decent and you get the usual backlighting that’s found on any modern non-budget laptop. There’s a bit of flex to the keyboard when typing but nothing horrible – the flex is endemic to the chassis design.

The touchpad isn’t quite so good, and it’s a bit baffling how many companies miss in this area. I’ve had inadvertent “zoom” gestures register quite frequently (instead of the expected scrolling), including when the drivers are “coasting” on a scroll and I happen to press the Control key. On the bright side I haven’t had a ton of accidental touchpad activations, and Sony uses a Synaptics Clickpad for the hardware. It’s also a large touchpad area, which means the lack of accidentally clicks while typing is even more impressive. The touchpad gets a pass, but I’d rate it a B rather than an A.

The touchscreen works well, though as usual you’ll first have to overcome the desire to avoid putting a bunch of fingerprints on your display (which is a personal pet peeve of mine and something my children seem to love doing). As I’ve discussed in the past, touchscreens are something that makes perfect sense to me on a tablet or smartphone, but on a laptop it’s something I don’t find necessary at this stage. Using a laptop is a different experience than using a tablet or smartphone, and with no true tablet mode to speak of I don’t have a huge need for the touchscreen. Others are sure to disagree, and since it’s easy enough not to use the touchscreen if you don’t want to, it’s mostly a moot point. However, given it's a $100 price increase I'm sure some will appreciate the option to skip the inclusion of a touchscreen.

The real benefit to the Sony VAIO Pro 13 is when we start discussing mobility. The VAIO Pro 13 comes with a relatively small, internal 37Wh battery, but even with that battery it still manages to deliver up to eight hours of usable battery life (in our Light benchmark – and that’s 90 minutes longer than the 6.5 hours Sony claims), while moderate to heavy loads will give you three to six hours depending on what you’re doing. If you need more than that, Sony also supports an additional sheet battery that basically doubles battery capacity and battery life. There’s also intelligence with the battery subsystem, so the laptop will first drain the sheet battery before using the integrated battery, and when charging the integrated battery will get charged to 80% before the sheet battery begins charging.

Basically, battery life is awesome on the VAIO Pro 13 – with or without the extra battery. The only problem I have is with the connection for the sheet battery, which just feels a bit flimsy to me – it always worked, but if the laptop felt a bit too flexible before, the added sheet battery only serves to emphasize the problem. The extra battery adds over half an inch to the back of the laptop and around half a pound, which isn't too bad but it would be nice if the sheet battery integrated better into the overall design. Oh, and the sheet battery adds another $149 to the cost of an already expensive laptop. That's pretty steep for a battery, but the extra intelligence that Sony includes (for charging/discharging) is at least partly to blame.

The mobility aspect isn’t just about battery life, though. I find 13.3” to 14” to be just about ideal for me when I’m on the road – but I’m pretty tall so you can hopefully understand when I say 11.6” laptops tend to be smaller than I like. 13.3” screens are a good size for keeping mobility while also being large enough that you can fit plenty of content on the screen – and 1080p is still usable. Given the screen size, you might expect the weight to be in excess of three pounds, but in fact it’s far less than that – 2.34 lbs. (1.06kg) to be precise. That’s only moderately heavier than a lot of 10” tablets, and you still get a keyboard and a larger display. This goes back to the material choices of course, and the lack of rigid metal on the chassis definitely helps keep weight down.

WiFi tesitng of the VAIO Pro 13 showed good transfer rates, with around 100Mbps on a 2.4GHz network and as much as 200Mbps on a 5GHz network. I also had no trouble using the VAIO Pro 13 within my entire house, which is a relatively modest two-story 2400 square foot abode. However, connectivity outside of my house is basically non-existent unless I'm outside of my office window. In fact, throughput and range on the 5GHz band is generally better than on the 2.4GHz band, which is not how things should be. I also had issues with the occasional WiFi dropout that required disabling/enabling WiFi to resolve (and an updated driver from Intel appears to have fixed that problem). The range question ends up being something you'll have to decide how important it is; I've seen better range on a lot of other laptops, but most of the time I don't tend to stray that far from my router (the farthest point inside my home is probably 40-50 feet away, through a couple interior walls and one floor). If you're looking for something that can work on a campus or in an office setting where the access point might be 100-150 feet away, the VAIO Pro 13 will likely not maintain a suitable connection.

The last thing I want to mention before moving on is that Sony has really done some work on tuning the boot process, plus the use of a PCIe SSD helps in reading large amounts of data. Turn on the VAIO Pro 13 and you might almost think it’s just waking up from sleep it boots so fast. Windows 8 definitely helps as well, but boot times of under seven seconds are very impressive. Elsewhere, performance is generally okay for typical home/office tasks, but the one area where the VAIO Pro comes up short is in gaming or graphics workloads. We’ll see this in the benchmark results, but for a Core i5 Haswell part, I just expected more from the GT2 iGPU. The CPU and SSD don’t have any such problems, but graphics performance is actually a step down from what we saw on most Ivy Bridge U-series parts. It's basically the only real shortcoming in terms of performance, and it's the one thing that's missing when we compare the VAIO Pro 13 with Sony's VAIO Z laptops.