SilverStone's Raven RV04 and Fortress FT04 have had a very storied history making the transition from the CES show floor to the retail floor. We've already reviewed the Raven RV04 and found it to be a fantastic performer in practice but hung up on a couple of poor engineering decisions; since the Fortress FT04 shares the same basic internal framework, it's going to inherit those issues by default. There are differences in the outer framework worth mentioning, though. 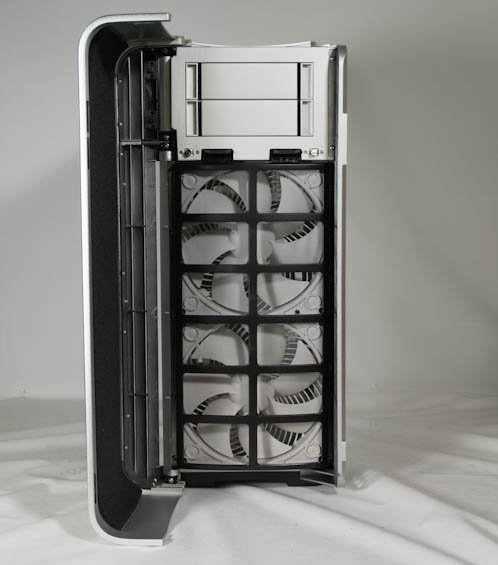 The RV04's biggest problem was its front door. The unusual curve wound up being incredibly problematic in practice; the hinge wasn't going to snap, but the natural flexibility of the material meant it was difficult to actually line the closed door up properly. Switching to an aluminum fascia (and doing aluminum the right way) and giving the side vented lips instead of leaving them open improves the problem tremendously, but doesn't actually solve it. SilverStone has apparently had a difficult time getting this door machined properly, and honestly it should've been considered a lost cause, scrapped on the table, and radically redesigned. We just don't need the door. No matter what surface the case sits on, the bottom of the door will lightly scrape against it. It catches on short carpet, it catches on the white fabric used for the photography backdrop, it catches. 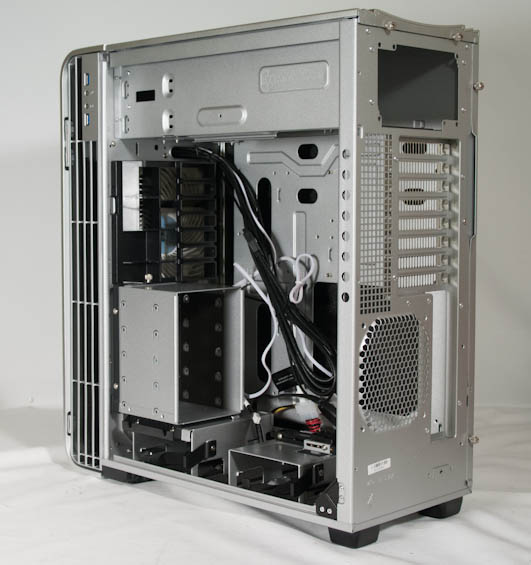 The rest of the exterior matches that attractive aluminum face, but the interior is, for better or worse, nigh identical to the Raven RV04. There are boatloads of features: a plastic rack (with included struts) for supporting graphics cards, an adjustable support for the CPU cooler in the bottom of the case, straps for better securing drives in the bottom bays, and one bay even has a plastic hotswap clamp and SATA backplane. And we still get the removable motherboard tray, and all the drive cages are removable.

So what's the problem? The problem is that all these features turn the interior of the FT04 into a mess, and they all require varying degrees of effort to employ. SilverStone cases are typically engineered differently than other vendors' designs; that's part of their appeal, and when a SilverStone design works, it works well. But the interior of the FT04 is haphazard; you could make a case for the graphic card and CPU cooler supports, but the lack of symmetry with the drive cages isn't just visually unappealing, it's work.

Component support remains essentially the same, and although two of the 3.5" drive bays are listed as "hotswap" on SilverStone's site, only one actually has the SATA backplane. The analog adjustable speed fans are, in my opinion, this case's killer feature beyond the thermal design. While the interior of the case is disorderly to a fault, we've already demonstrated that it's incredibly thermally efficient.