Stock Android is, like almost everything mobile related, a polarizing thing. I don't know why that seems to be the case with everything, but it just is, and there's certainly not a subject over which more words have been writ than the stock versus skinned discussion for Android smartphones. The OEMs contend that their customizations, skins, and software enhancements add value to the platform for both operators and regular users. Things like better onboarding and initial setup, support for additional features, custom camera UI, and of course visual appearance. Enthusiasts seem to be the loudest about wanting the Android platform to work something like the desktop – free of preinstalled programs, features, or skins. Arguing over which is "better" is really a semantic debate, since they each serve very different goals for very different audiences.

Let's talk about updates first. When I first saw the SGS4 GPe slide go up at Google I/O, I immediately began wondering how this would work from a software support and update point of view. There's a lot involved with supporting a handset, and it seemed unlikely that Google was going to do its own bringup of the linux kernel and all the various hardware idiosyncrasies on both phones on their own. It only takes glancing at the About page to verify that my suspicions were correct – the GPe phones run kernels supplied by the respective OEMs, Google supplies the build of Android that runs atop it. 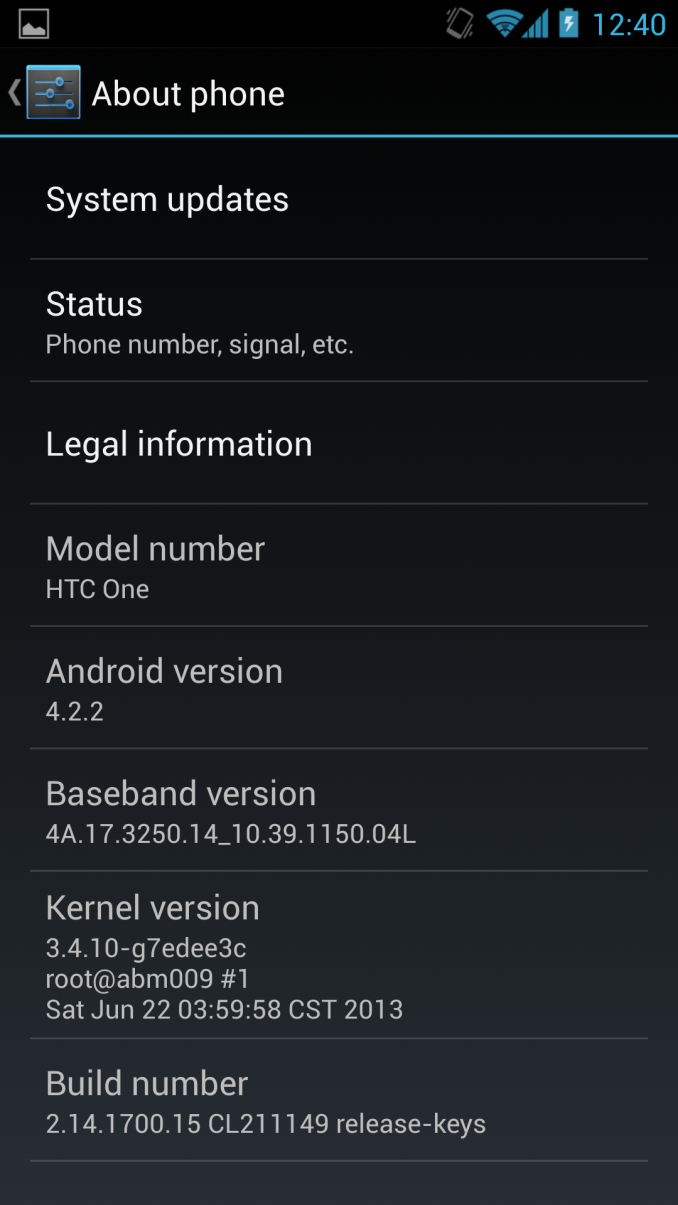 The result is probably the best combination of OEM and Google software, since OEMs ostensibly know their hardware best and can bundle everything required to make the phone work, and Google knows its Android platform best. The result is that ultimately the OEMs are in fact responsible for updating these Google Play experience phones through successive Android releases, but through Google's infrastructure. That might sound confusing or disappointing, but I wager that this means GPe devices will lag behind their canonical Nexus counterparts at most on the order of days or weeks rather than months thanks to the emphasis being placed on them and the end-run around somewhat pointless at this point US operator update testing (remember that both GPe phones are US operator tested and approved hardware, they're just running different software).

The software preferences between stock and skinned end up being a largely subjective thing. I can't help but admit that when I'm on a purely stock Android device I simply cannot shake the pervasive feeling that there's something missing. There's some truth to the continual OEM refrain that "there's a lot you need to do to Android to make it a phone for regular consumers." At the same time I've had a lot success handing out Nexus 4 phones to the Android-uninitiated and have never once heard back anything but that it's the best phone they've ever used. Don't get me wrong, I don't think stock Android is for everyone, but it seems to be less of an issue than it's made out to be.

Meanwhile when I'm on a skinned device I find myself wishing for pure stock implementation in various places. I'm vastly more comfortable with the new flat visual appearance of HTC's Sense 5 than I am Samsung's TouchWiz, which looks dated with its Android 2.3-inspired green on black theme that pops up throughout. TouchWiz is home to lots of bright atop black UI elements, which is unsurprisingly a conscious effort by Samsung to optimize against the strengths of its AMOLED displays (black pixels draw no current). What's interesting is that even on the SGS4 GPe, the gradients behind elements throughout much of the UI are gone, leaving just solid black. Compare the About page screenshots above and you'll see exactly what I am talking about. Is that not stock enough for the purists out there? I'll let you be the judge.

What strikes me most about using the SGS4 and HTC One GPe devices is how much speedier the UI feels on them. This is especially apparent for me compared to the SGS4 with TouchWiz, which as I've stated before has a number of gratuitous animations which seem to slow things down in a way benchmarks don't and can't convey. The HTC One feels a bit faster, but the difference isn't as dramatic, and I'm not sure how much of that is 4.1.2 vs 4.2.2 or Sense 5 vs stock.

The reality is that both devices aren't completely stock, they are a combination of Nexus, Samsung, and HTC features. I'm surprised by how well Google struck a balance between the features unique to each phone that needed to be exposed and their commitment to Nexus-feel. Anyhow let's talk about what's different between the two phones running this Google Play experience and their original software load.