In and Around the HP Spectre XT TouchSmart

If nothing else, the HP Spectre XT TouchSmart is a looker. While it's hard not to feel a little bit of fatigue at all the designs essentially aping the MacBook Pro aesthetic, at least HP is doing it right with the Spectre XT TouchSmart. This is a good-looking, well built ultrabook.

The majority of the Spectre XT's shell is comprised of sturdy brushed aluminum, with the HP logo tastefully etched into the lower corner of the lid. The interior surfaces are brushed aluminum as well, excluding the display and bezel, and the bottom of the shell enjoys a soft touch coating that I think is actually a better choice than simply wrapping the whole thing in garden variety brushed aluminum. 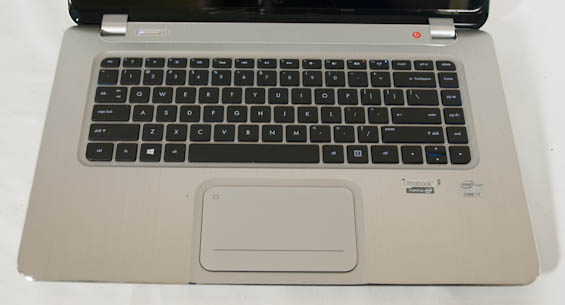 On the interior of the notebook, there's a glossy edge-to-edge finish for the touchscreen display. Under the hinge is the first pair of speakers, with the second set hiding on the edges of the underside of the notebook. The keyboard is HP's traditional chiclet style layout and white LED backlit; they've eschewed the 10-key, but I've been told 10-key is going to be coming back in the next product cycle for notebooks in this size class. Typing action is pretty good, but it's about time for HP to retire or revise this design.

Meanwhile, I've become a pretty big believer in glass touchpad surfaces. Toshiba's Kirabook sports one, and the ones HP has been using on their higher end consumer notebooks and in their EliteBooks are frankly stellar. While I still don't care for clickpads, we're at least finally getting to the point where they make sense. Windows 8's edge gestures make a solid case for them, and HP's implementation here is a sound one.

Unfortunately, the Spectre XT TouchSmart comes a bit loaded with bloatware like a relic from a bygone era. Including PowerDVD is pointless on a notebook that has no optical drive, and WildTangent has been infecting HP hardware for too long. The touch experience is fine, but the system as a whole isn't that snappy, and you can feel the difference between a mechanical hard disk with SSD caching and a true SSD storage solution. As is becoming an unpleasant tradition with the ultrabook movement and the need for thinner, lighter form factors, the Spectre XT is not user serviceable; you're stuck with the configuration you buy.