Where the current generation XPS 13 makes a clean break with its predecessor is the stunning 1080p display. The Dell XPS 12 also features a 1080p IPS display, but due to the 12.5" panel (as opposed to the 13.3" in the XPS 13), pixel density is increased. The XPS 12 Duo does make an interesting counterpoint to the XPS 13 due to its inclusion of a convertible touchscreen display. 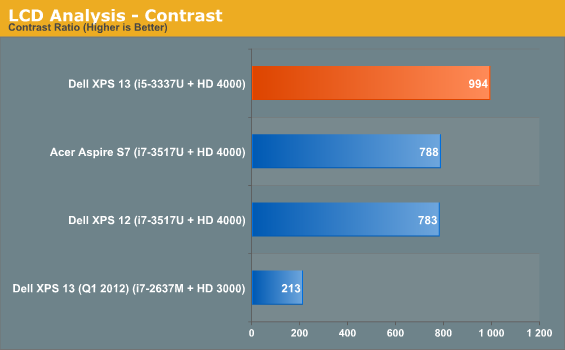 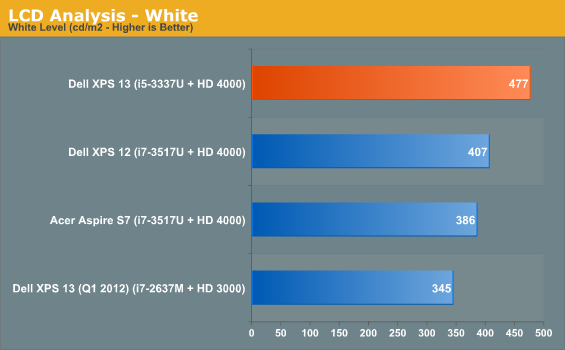 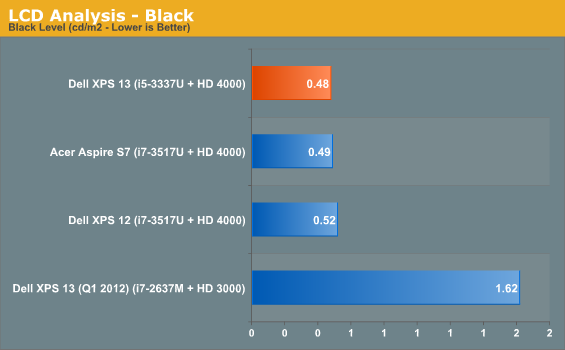 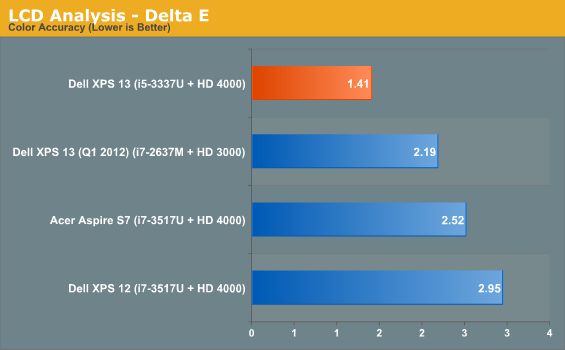 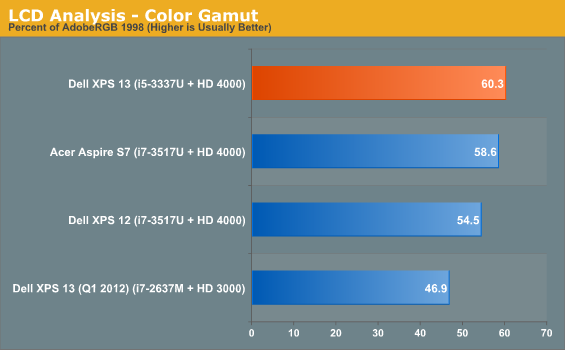 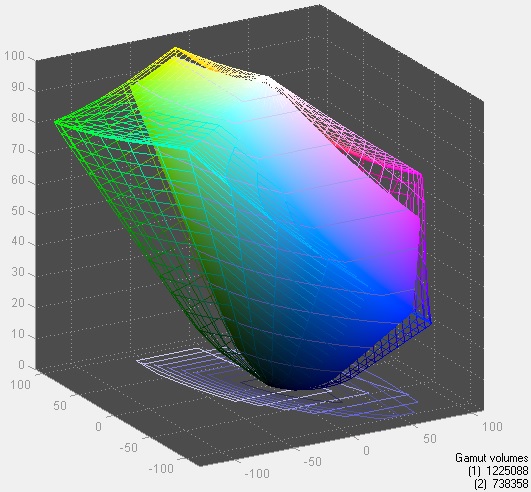 Despite the greater pixel density, though, the XPS 13's display blows away the XPS 12's in every metric, to say nothing of the way it levels the 2012 XPS 13's panel. Dell advertises the panel's brightness as being 350 nits, but we measured an almost searingly bright 477 nits.

Where the XPS 13 can become frustrating, though, is its use of adaptive brightness. The display is often much dimmer than ideal, and while adaptive brightness can be useful on a smartphone, on a notebook that feature's value is much more questionable. The XPS 13's brightness can shift semi-frequently, and I never found it to be where I actually wanted it. Thankfully, it can be disabled in the Display settings under the Windows Power Manager.

Thermally, the newer XPS 13 peaks at essentially the same temperatures as the last generation model. You can see that below in the HWMonitor results, but that doesn't really tell the whole story. 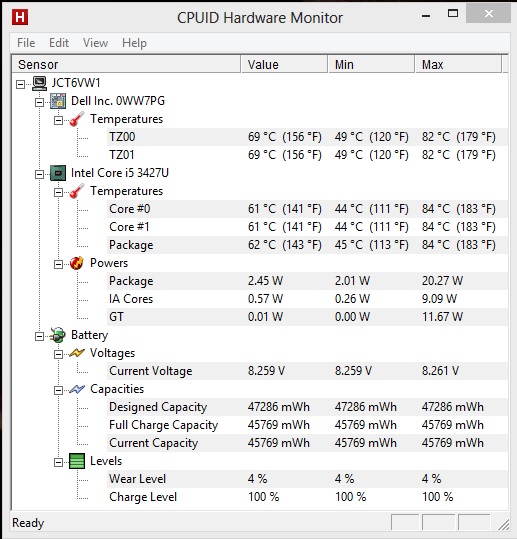 These thermals are pretty much par for the course for an ultrabook, but the difference lies in the way the XPS 13 actually handles the heat. Peak load noise is far lower than the first generation and nowhere near as high pitched; in fact, this is actually one of the quietest ultrabooks I've tested, and it has to be pushed pretty hard just to get the fan noise really going. I still take issue with the ventilation being on the bottom (as all it really takes is a comforter to clog up the vent and suffocate the system), though.

I suspect Dell has tuned the fan's behavior somewhat with the new XPS 13, but I suspect there's a combination of factors that lead to this model being much less obnoxious. Ivy Bridge is better suited to ultrabooks than Sandy Bridge ever was, Dell switched from DDR3 to DDR3L (which can easily shave a couple of degrees off the internal temperatures), and we're on QS77 instead of QS67 which means there's no external USB 3.0 chip. Little things can add up over time, and we're left with a frostier, quieter notebook than we had before.

Our 2013 battery tests are more punishing on the system, and results wind up being lower than they used to be. We no longer measure how long a system can idle, and brightness is up to 200 nits from 100 during testing, which can and will have a huge impact on battery life. 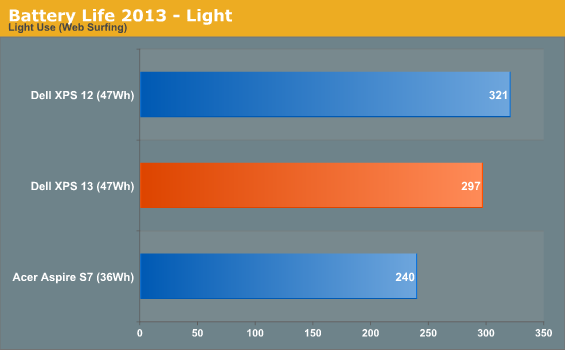 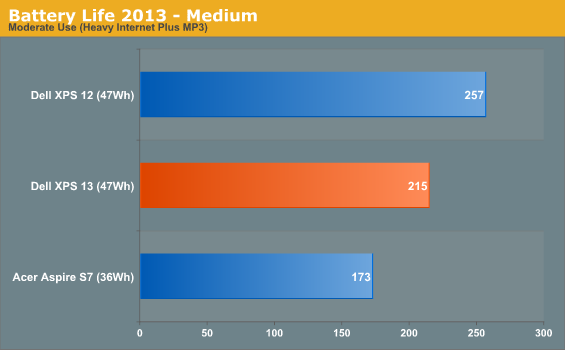 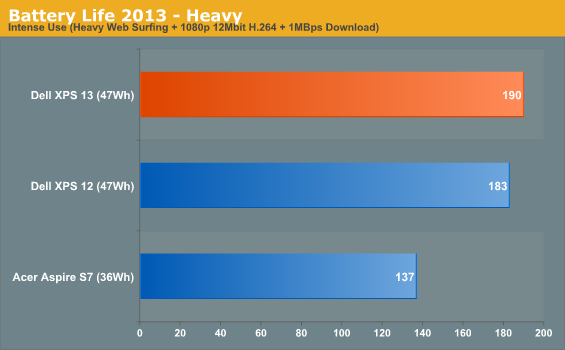 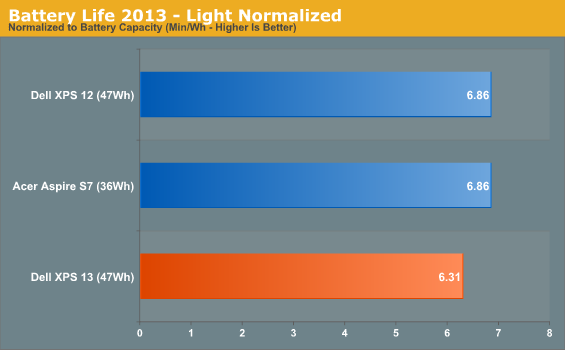 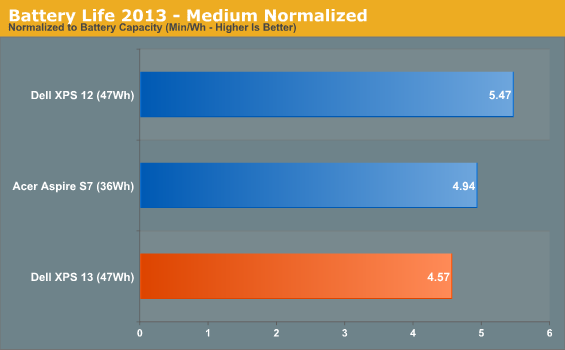 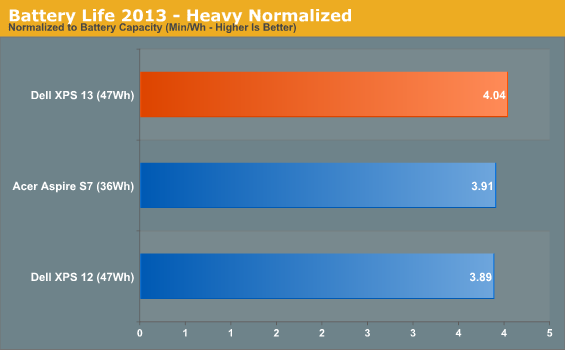 Running time under light usage for the new XPS 13 is solid if not exceptional, but when the notebook is pushed, it starts to show a more efficient performance than the others. The XPS 12 and XPS 13 are using the same battery, but the 12 has a slightly faster processor and smaller display, accounting for at least some of the difference.