What makes the ATIV Tab most interesting is in its use of Qualcomm's APQ8060A SoC. With a pair of Krait CPU cores running at up to 1.5GHz, we should see tangibly better performance than the 1.3GHz Tegra 3 powered Surface RT.

As we make our way into 2013, at least on the Windows side of things, I'll be able to move away from js based performance comparisons between tablets. For now, we start off with some of the latest JavaScript tests we've been using in our mobile reviews. All of these were run in Modern IE10 on the Windows devices.

First up are the RIABench focus tests, these are javascript benchmarks that focus on various compute bound tasks. The Focus Tests are very short, with the entire benchmark completing in under 6 seconds for all of the participants here: 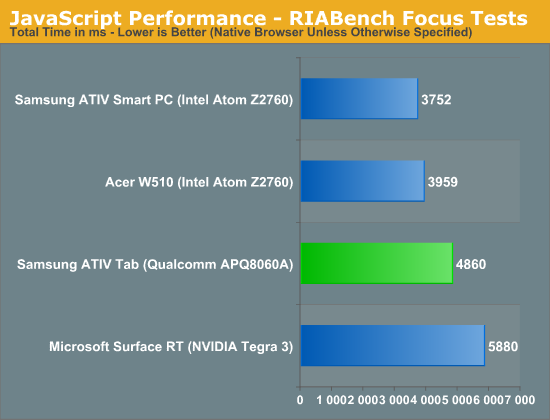 Next up is SunSpider, a short to mid-length JavaScript benchmark that we've used for a while now: 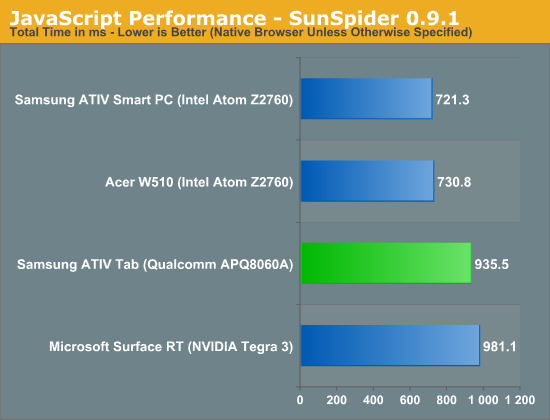 SunSpider shows a fairly close match between Qualcomm and NVIDIA, however once again Clover Trail is able to pull ahead by nearly 30%.

Finally we have Kraken, a seriously heavy javascript benchmark built by Mozilla. Kraken focuses on forward looking applications that are potentially too slow to run in modern browsers today. The result is much longer run times than anything we've seen thus far, and a very CPU heavy benchmark: 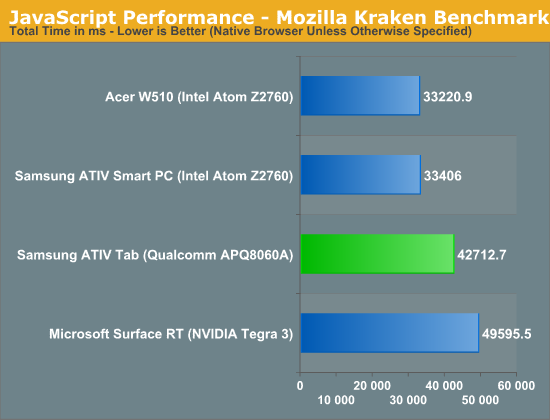 Photo Effects: Measures the time to apply effects to a set of six photos. The filters are Sharpen, Emboss, and Glow. WebXPRT applies each filter to two photos. This test uses HTML5 Canvas 2D and JavaScript.

Stocks Dashboard: Measures the time to calculate financial indicators of a stock based on historical data and display the result in a dashboard. The calculations are done in JavaScript, and the calculated stocks data is displayed using HTML tables and Canvas 2D.

We're reporting the overall score after all tests have been run: 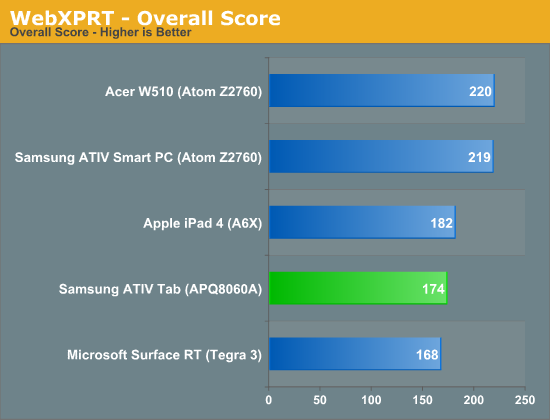 The WebXPRT tests show a narrower gap between Tegra 3 and APQ8060A, however the Intel advantage remains strong at 26%.

Next up are another set of benchmarks from PT, but unlike the WebXPRT suite these tests don't run in a browser. Once again we're looking at performance in a handful of tasks designed to stress the CPU: 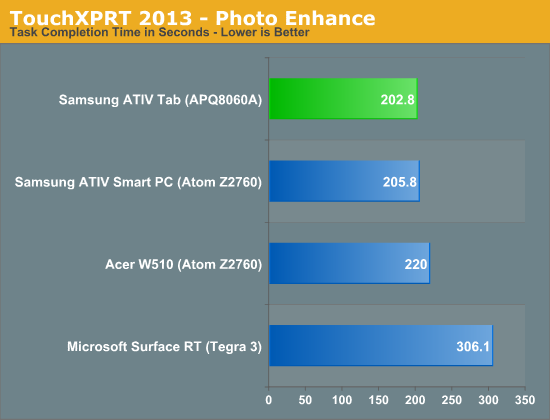 Now things are looking a bit different. Qualcomm is able to manage a slight victory over the Clover Trail equipped ATIV Smart PC. For all intents and purposes, APQ8060A equals the performance of Atom Z2760 in this test. 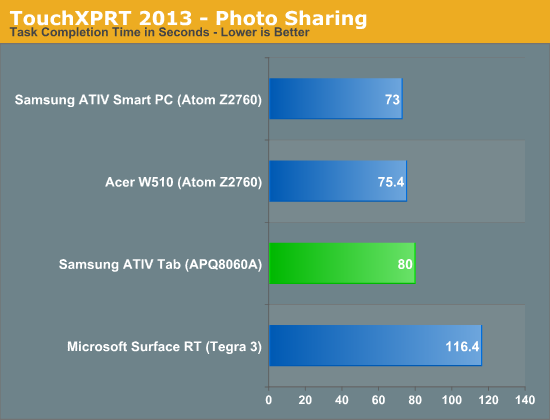 Intel pulls ahead a bit in the Photo Sharing benchmark, but Qualcomm remains quite competitive. 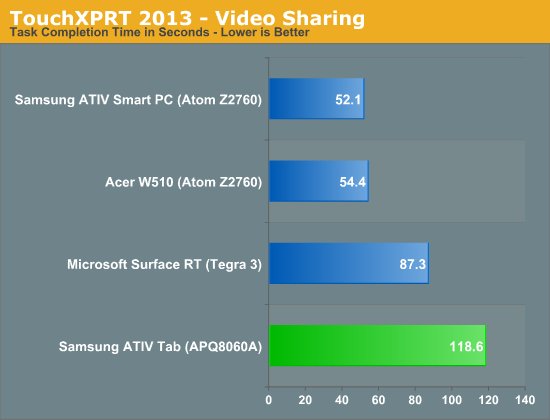 The one blemish on Qualcomm's TouchXPRT 2013 record is its performance in the video transcoding benchmark. Apparently this test sets up two decode streams (one for transcode and one for preview) and one encode stream, while Qualcomm's hardware decoder appears to be optimized for a single stream decode. The result is that both decode streams are interleaved, which increases the benchmark time. Qualcomm argues that for this type of a workload you'd typically setup a single decode stream and use that same stream for transcode and preview rather than setup two streams. Qualcomm was quick to point out that this isn't a Krait CPU limitation but rather a unique pairing of workload and decode hardware that resulted in the performance delta here. 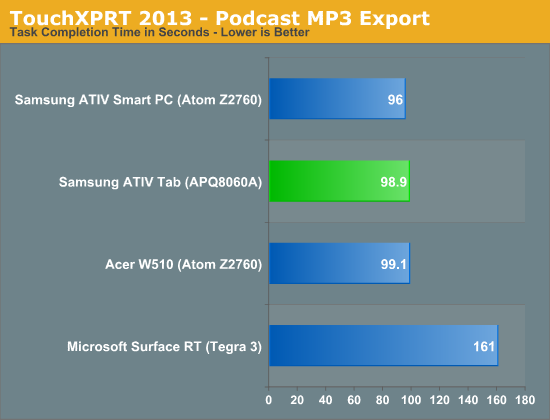 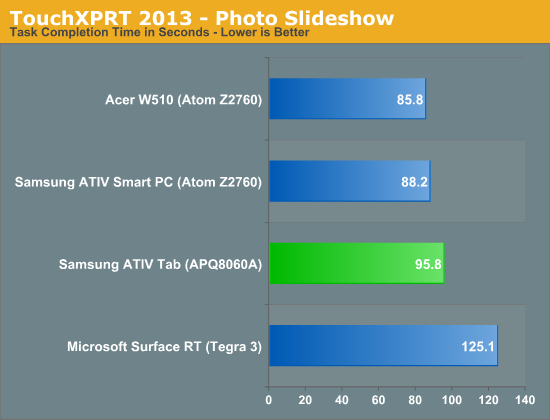 In practice I'd say my experience with the ATIV Tab mirrored what these results showed. Qualcomm's superior single threaded performance resulted in a snappier desktop experience than what I got with Tegra 3 on Surface RT. In many cases, the ATIV Tab felt just as quick as Acer's Clover Trail based W510 although that wasn't always the case. UI performance in desktop mode was appreciably better than on the W510 however. Modern UI performance remains quick and smooth, as is the case with all Windows RT/8 tablets (Clover Trail does seem to get a slight edge here).

Although we don't yet have reliable 3D benchmarks we can run on Windows RT, from what I've seen it looks like the Adreno 225 hardware/driver implementation in Windows RT results in performance that's between Clover Trail and Tegra 3. Depending on the workload, I've even seen better performance out of APQ8060A/Adreno 225 than Tegra 3. It'll be a little while before we can fully quantify all of this though.