Probably one of the most important smartphone components for me is the browser, and each major version of Windows Phone has brought improvements which have largely brought it up to or close to parity with the competition. This update is no exception, and includes the codebase for IE 10 shared between Windows 8 and Windows RT. Windows Phone 7 launched with Trident 3.1 (IE 7.0), then WP7.5 brought Trident 5.0 (IE 9.0), and now WP8 brings Trident 6.0 which is IE 10. Microsoft hasn’t yet decoupled the browser from platform updates, but then again neither has iOS, although going forward it will become an inevitable part of making mobile platforms a real place to get work done, but I digress. 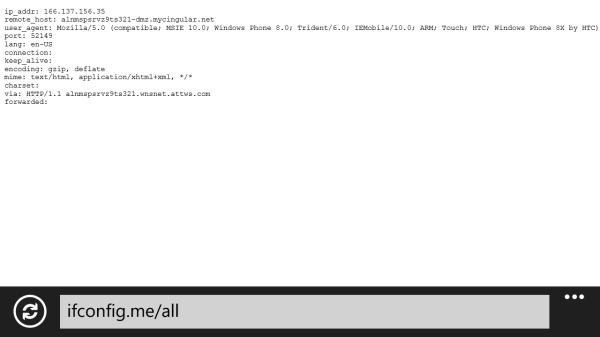 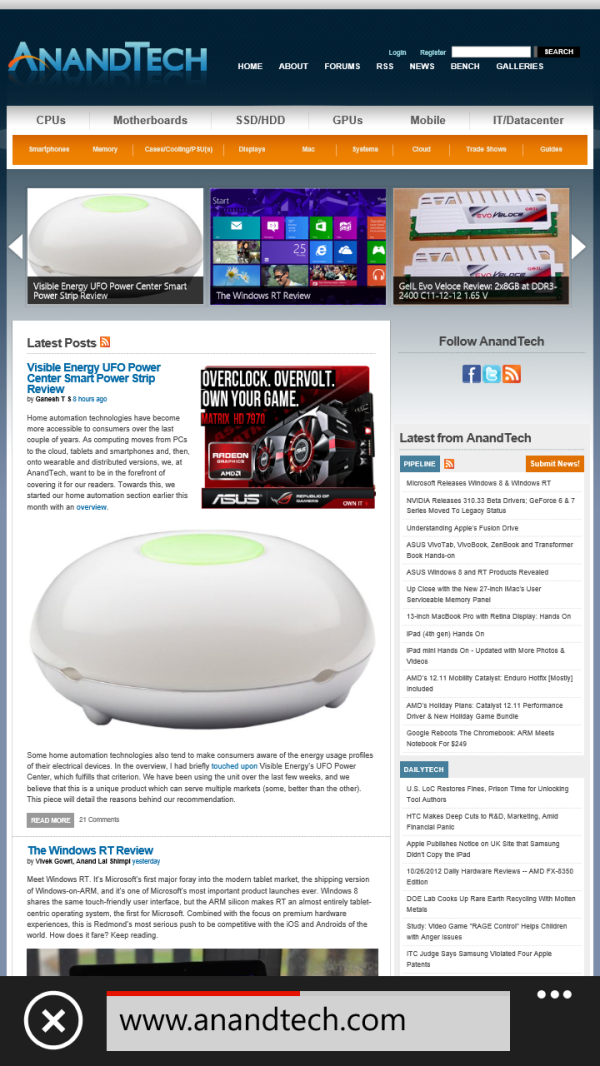 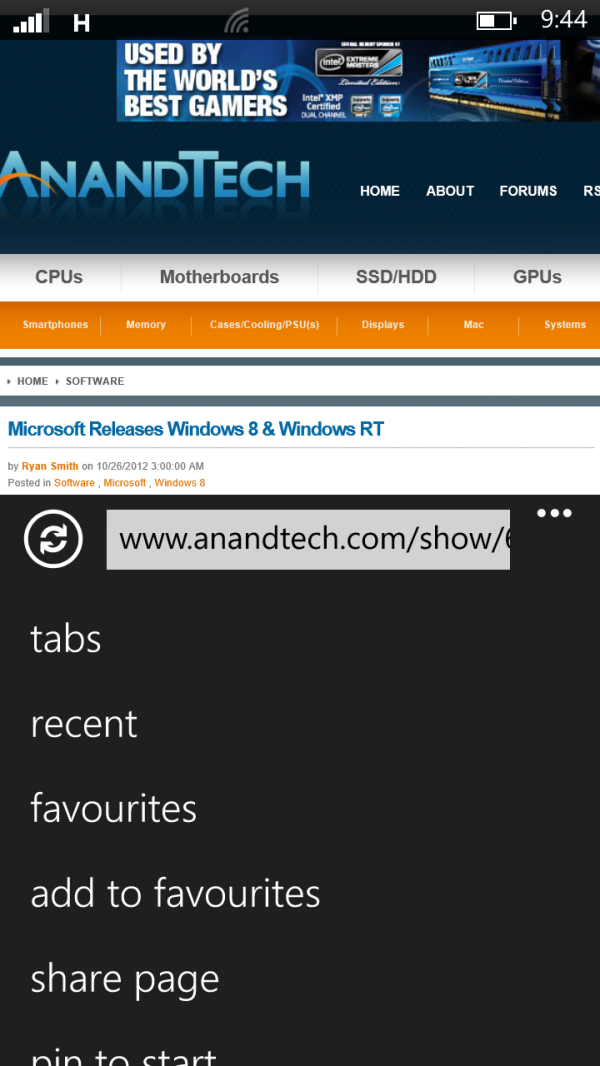 JavaScript performance has also improved dramatically. There was one slide back at the Windows Phone Summit which quoted around a 4x increase in that JS performance thanks to dramatic improvements made to Chakra (the JIT engine Microsoft built for IE 10), and I was later told to expect sub 1000ms sunspider 0.9.1 runs from WP8 devices. Benchmarking WP8 really just ends up being testing JavaScript performance, largely because from an SoC perspective Windows Phone has been a closed camp with only Qualcomm SoCs. That’ll eventually change at least for Windows RT, but at present we’ve got a ton of JavaScript tests to choose from.

As promised, the 8X gets sub 1000 on sunspider 0.9.1, which is very impressive. Clearly this was an optimization target for the team, and to their credit it beats the V8 project’s performance on MSM8960 which is very impressive. I’ve included the Lumia 900 which was running the latest WP7.5 as of its running for comparison, you can see how dramatic of a jump JS performance is for the platform in that test, more than the 4x number for sure, but across CPU architectures (Scorpion to Krait). 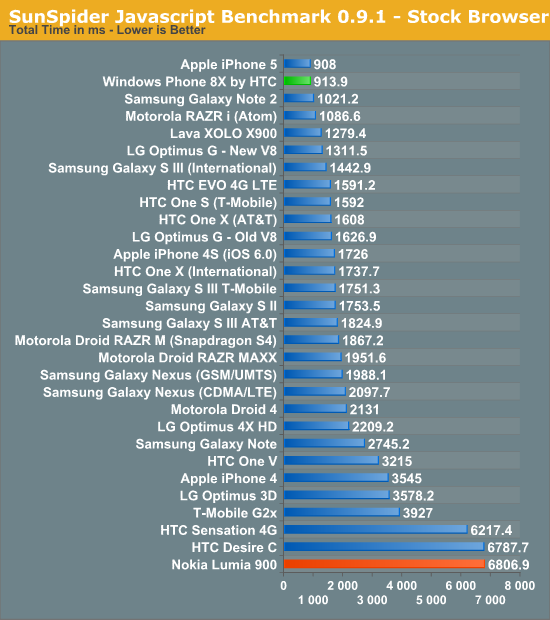 Browsermark is another largely JS-dominated tests, though there are a few other things in there as well. This is another test that we’ve had around forever and have a lot of data for. The 8X doesn’t do quite as well here, which is strange. I noticed that it does seem to hitch and slow down on one particular subtest, which I suspect is why there isn’t as large of a delta here, even though it’s double the Lumia 900 score. 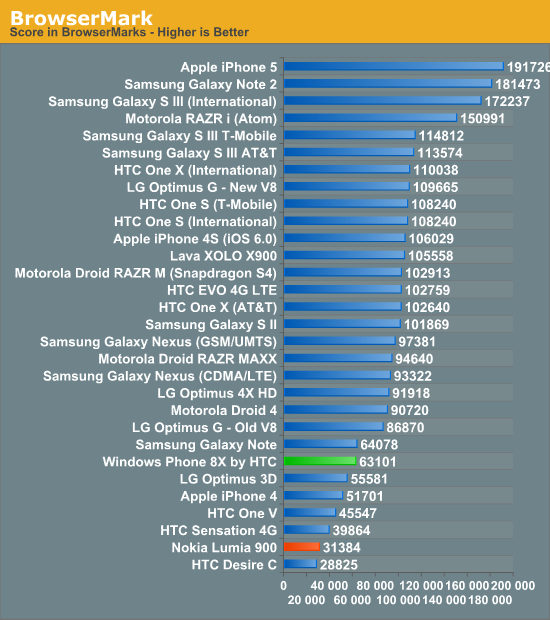 Google Octane and Mozilla Kraken are recent JS benchmarking additions for us. Octane builds on the V8 test and includes even more test cases, Kraken is Mozilla’s testing suite for their engine. 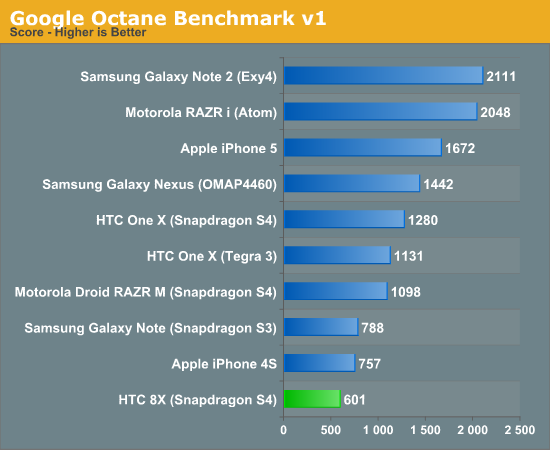 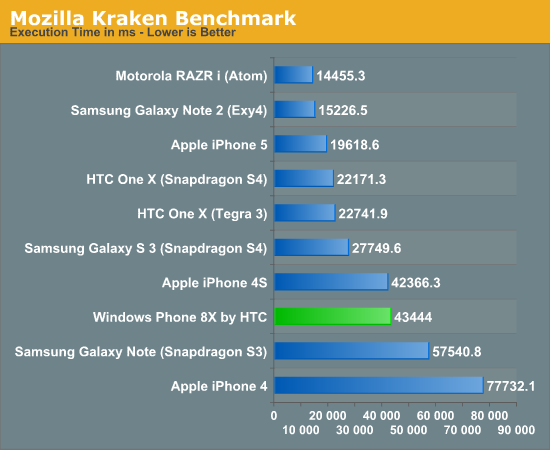 I tried including a WP7.5 device in Kraken and Octane, but the platform simply wouldn’t even finish running either test and either halted or failed to produce a score. I think that’s pretty telling about how much better IE 10 is, as both Kraken and Octane are pretty demanding workloads. IE 10 and Chakra clearly don’t get along with Octane, but Kraken performance isn’t bad at all.

My subjective performance takeaway for IE 10 is that both browsing and loading pages is faster. Scrolling around is still just as smooth in WP8 as it was in WP7 and 7.5, and I’ve yet to see any strange page rendering like I did from time to time even on WP7.5. The UI also gets improvements, including the ability to customize the address bar button and change between stop/refresh, favorites, and tabs, NFC link sharing, find on page, and of course the same malicious site filtering as IE 10 elsewhere. One feature that isn’t present I’d like to see is the font size boost that iOS and Android impose on pages whose views aren’t mobile optimized. This is a subtle thing but does make a big difference in readability.

WP8 includes NFC sharing throughout, and though I couldn’t test most of it without a second device (but did see it demonstrated at one point), it’s important to go over. I should note that for some things (like contacts) you don’t need to stay within a particular NFC ecosystem, but for other things that are WiFi-direct augmented this is still largely a platform or OEM-specific implementation. In WP8 NFC sharing is dubbed Tap+Send, and gets its own settings pane toggle. 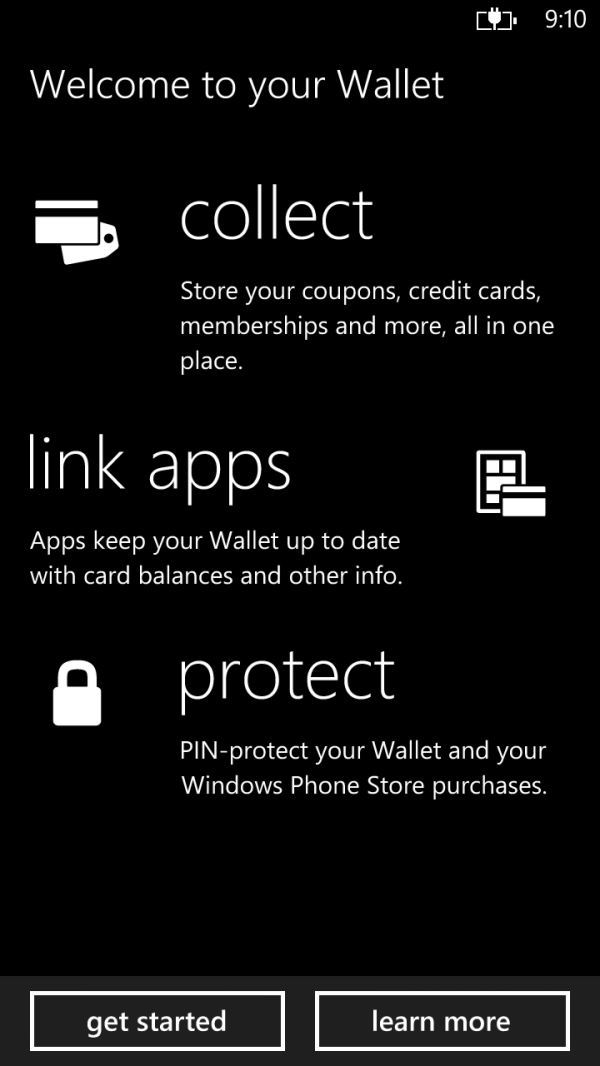 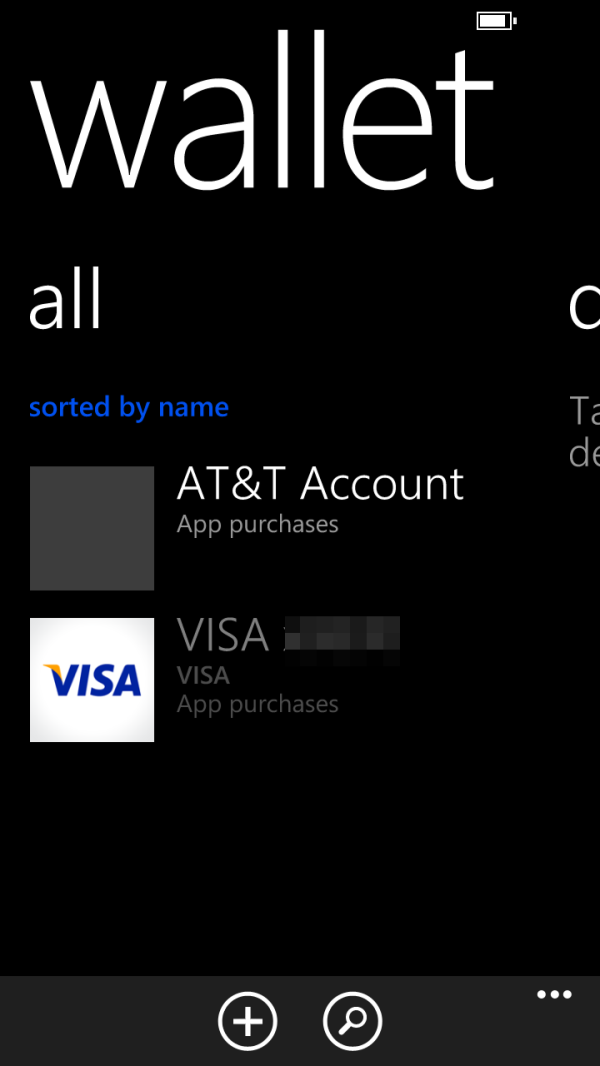 Tap+Send supports sending and receiving links from IE 10 as I touched on earlier, in addition to arbitrary contacts from the people hub. Photos and videos likewise can be shared over NFC, but really this begins the transfer which completes over WiFi or Bluetooth.

NFC payment on WP7 works through Wallet, which includes both operator billing methods and any credit cards associated with your Microsoft account. Of course, paying at enabled kiosks requires operator support, but it is possible through the Wallet app. Loyalty and membership cards are also supported, though at present I couldn’t find any apps to demonstrate with.

This has already been discussed somewhat by Nokia during their own press event, but WP8 now thankfully includes the ability to take screenshots from within the OS by pressing the power/lock button and start at the same time. Screenshots then get stored in a separate “Screenshots” album. It’s crazy how it took Android so long to get first party screenshot support, and likewise how long it took for Windows Phone to get it.

With WP8 comes the ability to finally update without plugging into a PC. This was a big friction point with WP7 for OS X users, and now pretty much goes away entirely thanks to OTA support arriving. I saw this process in action while installing the US english language pack, and obviously it works well. 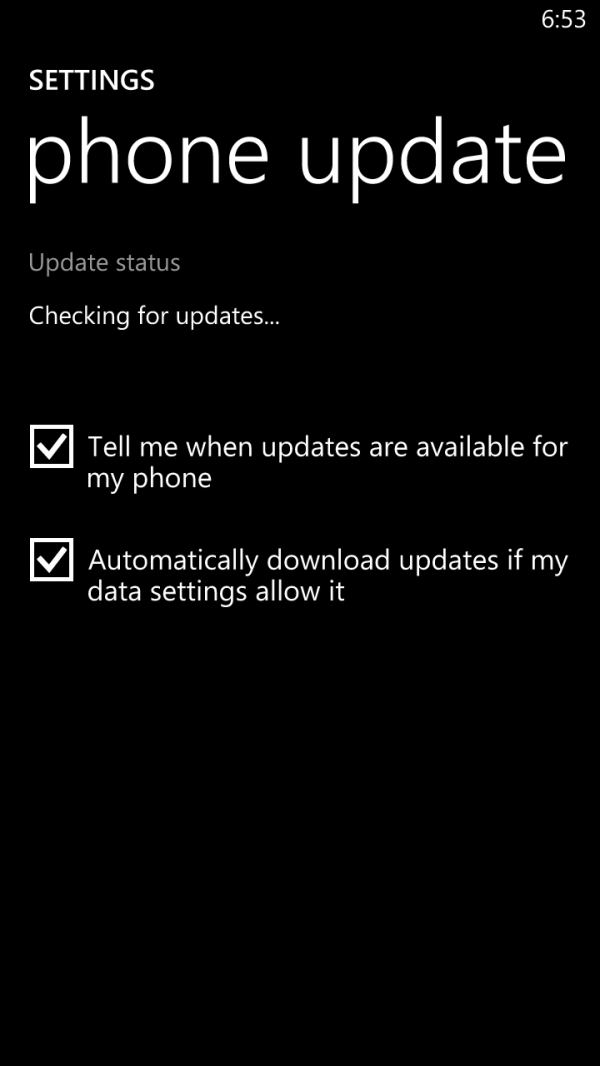 Backup to the cloud using SkyDrive is now a supported feature on WP8. During setup, there’s a prompt asking if you want to turn this on for installed applications, settings, text messages, and photos. The backup functionality includes basic things like what applications you’ve installed, the settings for those applications as set through the main settings app, and all the SMS threads you have going. I’m told it doesn’t have the ability to backup every bit of application data at present, or the home screen layout, though it’s possible this might come soon. 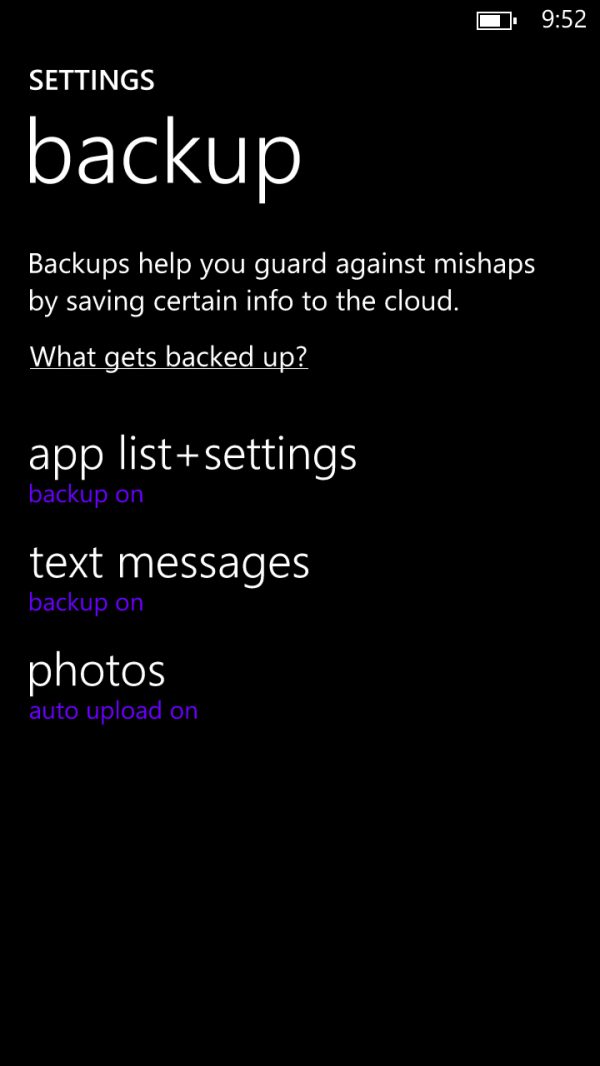