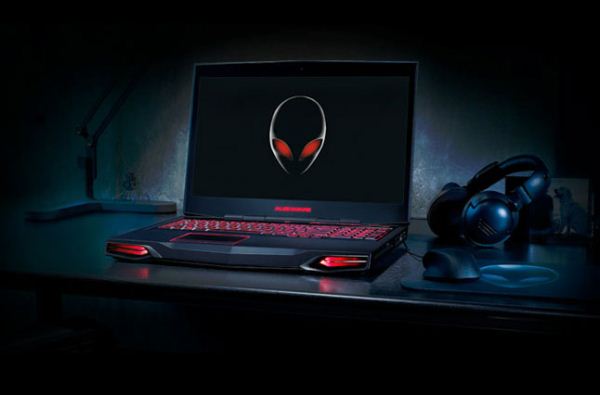 The launch of any new mobile processor line almost always precedes retail availability, but with Ivy Bridge mobile just previewed last week, we’re already seeing various companies ship updated laptop and notebook configurations. The biggest vendor to announce shipping IVB laptops/notebooks is Dell, in this case under their Alienware brand. All three currently shipping Alienware laptops are now shipping with mobile Ivy Bridge (along with some continued support for Sandy Bridge), and the GPU configurations are also being updated across the lineup. Here’s the full rundown of the CPUs, GPUs, and other configuration options supported on the Alienware notebooks:

The smallest of the bunch is the Alienware M14x, and along with Ivy Bridge the GPU option gets upgraded from GT 555M to the new Kepler-based GT 650M. We’ve pulled the specs for the GT 650M from NVIDIA’s site, and it’s possible that Alienware will use slightly different clocks, but it should still be a sizeable upgrade to the previous M14x model that used a GT 555M with DDR3 memory. Memory bandwidth goes up nearly 50%, and compute performance likewise gets a healthy shot in the arm: the 384 CUDA cores in the GT 650M should provide 66% more compute and texturing potential. Given the maximum 1600x900 resolution, the combination of GPU and CPU should be sufficient to handle most games at high detail settings—4xAA might need to be disabled on some titles, however.

Perhaps the more important change for the M14x will be the power draw of the new CPUs and GPUs. While there was plenty that we liked with the previous M14x configuration, there was one problem: the quad-core Sandy Bridge processors combined with GT 555M made for a rather noisy laptop under load. Both Ivy Bridge and Kepler have shown so far that they require less power to hit similar performance levels as Sandy Bridge and Fermi, so hopefully the revised M14x will be less of an ear-sore. PCI Express 3.0 is also present thanks to the CPU and GPU upgrades (at least with Ivy Bridge CPUs), but it’s unlikely the additional PCIe bandwidth will make a difference for a mobile GPU like the GT 650M. The GT 650M is also Optimus enabled, so battery life should remain around the 5-6 hours for light usage cases that we measured on the previous model.

The remaining specs are basically a rehash of what we’ve previously seen, with the only noteworthy update being the switch from Intel’s HM67 chipset to the HM77 chipset. Alienware already had a USB 3.0 controller with the HM67 version, but presumably HM77 allows them to ditch the extra controller chip and utilized Intel’s native USB 3.0 support. The third USB port is still limited to 2.0 speeds, but it does support charging of devices (e.g. iPods, Smartphones, etc.) while the laptop is powered off. Pricing of the updated M14x starts at $1099 with 6GB RAM, 500GB HDD, and a dual-core Sandy Bridge i5-2450M processor; the move to quad-core Ivy Bridge tacks on another $100, and we’d highly recommend upgrading to the 1600x900 display for $75 extra as well.

The Alienware M17x takes the previous model and again makes a few minor upgrades, largely sticking with the design that earned the M17x R3 our Bronze Editors’ Choice award. Our main complaint was with the configuration options at the time of our review, and the updated version looks like it’s corrected many of those concerns.

For the CPU, only the best will do: the M17x is now all quad-core 45W Ivy Bridge—and no, we’re not particularly concerned with the missing i7-3920XM, as Intel’s Extreme Edition processors have generally been far too expensive for the minor performance improvements offered, especially on the mobile side of the fence where the fully unlocked multiplier isn’t as important.

For the GPU, Alienware now offers the GTX 660M (an 835MHz GK107), the GTX 675M (a rebadged GTX 580M), or AMD’s new tour de force, the HD 7970M. Interestingly, the HD 7970M is actually priced cheaper than the GTX 675M, which based on initial performance reports is bassackwards—not that we haven’t seen similar pricing oddities in the past, as NVIDIA’s top-tier GPUs almost always cost more than AMD’s. Something else that isn’t indicated on the press release is support for switchable graphics technologies; we inquired with Alienware and are waiting to hear back (on the M17x as well as the M18x).

Nearly everything else remains the same or similar to the M17x R3, but Dell’s website now includes several additional options for storage configurations, including HDDs with mSATA SSD caching (presumably via Intel’s Smart Response Technology), single SSDs, or HDD + SSD configurations. Pricing starts at $1499 for the base model with an i7-3610QM, GTX 660M, 6GB RAM, 500GB HDD, and 1600x900 LCD. The 1080p LCD upgrade is somewhat steep at $150, but we’d still recommend paying for it, and if you’re mostly interested in gaming performance the HD 7970M looks to be the fastest current mobile GPU available for $200 extra. That puts the total at $1850 for a potent gaming notebook, though if you want to add an SSD or more RAM you can easily spend more.

Rounding out their Ivy Bridge lineup, we have the Big Kahuna of gaming notebooks, Alienware’s M18x. This is one of the largest notebooks around, and it’s also one of the few places you can get dual-GPU configurations for maximum gaming performance. Right now, the M18x R2 configuration pages only list NVIDIA GPUs, but the Radeon HD 7970M should be available sometime in the coming weeks. The only other notebook we know of that supports dual HD 7970 or GTX 675M GPUs is the Clevo P270WM, which is an update to the X7200 chassis that swaps out socket LGA1366 support for LGA2011 and up to hex-core Sandy Bridge-E CPUs. These are true desktop replacements, with a starting weight of nearly 12 pounds for the single-GPU, single-HDD model. (They’re also a great way to give your mobile geek some strength training!)

On the CPU side, the options are all once again quad-core Ivy Bridge, but Alienware now adds the “missing” i7-2920XM Extreme CPU. There’s also a $250 upgrade that will raise the maximum Turbo Boost clocks of the i7-2920XM from 3.8GHz to 4.1GHz, though the required setting for the overclock should be in the BIOS even if you don’t pay extra. Storage options are also similar to the M17x R4, except that there’s now support for a third HDD/SSD, and Alienware offers three-way RAID 0 configurations with 256GB or 512GB SSDs.

Pricing for the M18x R2 starts at $1999, but that’s a little deceiving as the base model only includes a single GTX 660M GPU. If you’re buying a huge notebook like this, you’re almost certainly after maximum graphics performance—otherwise why bother? The upgrade to dual GTX 675M costs $600, so the current minimum cost for an SLI-equipped M18x R2 is $2599—for the same price you can get the mid-tier model that also bumps the RAM to 8GB and doubles your storage space with a second 500GB HDD in RAID 0. If on the other hand you want to max out all the components, the top-end M18x upgraded to an overclocked i7-3920XM, 32GB DDR3-1600, 3x512GB SSDs, Windows 7 Ultimate, and a 4-year warranty and you can push the price over $7250. Yowza! Not that we’d recommend doing so unless you have a lot of money burning a hole in your pocket.

Besides all of the other updates, Alienware has also released a new update to their AlienFX software in their ongoing collaboration with Electronic Arts. The zoned lighting can now tie in to your onscreen action and adjust colors accordingly, providing a “more personal experience”. The PR blast also mentions player health lighting effects, suggesting you’ll be able to tell just by looking at your keyboard how close you are to dying. Fun, right? As far as we can tell, the AlienFX update should be available for other Alienware laptops and desktops that feature the zoned lighting technology.