Since our reference 7950s are built on the 7970 PCB and cooler, we’re going to jump right into our vendor cards starting with the Sapphire HD 7950 Overclock Edition.

As with all of the 7950 cards launching today, Sapphire’s HD 7950 Overclock Edition uses the AMD 7950 PCB. This is a slightly shorter PCB measuring 10.25” long, saving .25” over the 7970 PCB by eliminating a few components that the lower board power of the 7950 makes unnecessary. The PCB is otherwise very similar to the 7970 PCB, utilizing 12 GDDR5 memory chips organized around the Tahiti GPU, while at the top you’ll find the 2 CrossFire connectors, a pair of 6pin PCIe power sockets, and the BIOS selection switch. The latter will be of particular interest to unlockers, as the switch should make it possible to safely attempt to unlock the 7950 into a 7970. 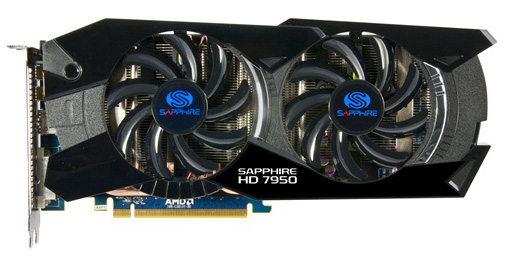 Moving on, as this is a semi-custom card the real differentiation is in the factory overclock and the cooler. On the performance side of things Sapphire will be shipping the 7950 Overclock Edition at 900MHz core and 5GHz memory, representing a 100MHz (12.5%) core overclock and no change on the memory clock.

Meanwhile for the cooler Sapphire is using what they’re calling the Dual-X cooler. The Dual-X is yet another double-wide dual-fan open air cooler, with 2 fans providing copious airflow over an aluminum heatsink running virtually the entire length of the card. Sapphire’s fan cutouts are just a bit bigger than most other dual-fan coolers and placed a bit higher, and as a result the Dual-X cooler is a bit taller than the PCB by about 15mm at its highest point. Meanwhile the cooler is also a fair bit longer than the PCB, putting the total card length at 11”.

Moving below the fans and the heatsink we’ll find the heatpipe assembly, which is responsible for carrying heat from the GPU to the heatsink. The Dual-X uses 5 copper heatpipes of varying radius that run from one end of the heatsink to the other. The 5 heatpipes converge at the base of the assembly, where a copper baseplate provides contact with the GPU. Meanwhile cooling for the VRM MOSFETs and RAM is provided by a black aluminum plate, which is placed over those components with heat transfer provided by the use of thermal pads. There is no connection between the plate and the heatsink, so the only heat dissipation from the plate is provided by whatever airflow from the fans reaches the plate. 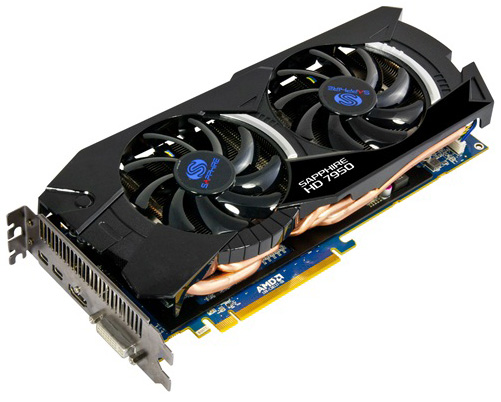 At the front of the card we’ll find the display ports, which as this is an AMD PCB the card utilizes the standard AMD 7000 series port configuration of 1 DL-DVI port, 1 HDMI port, and 2 mini-DisplayPorts. Filling out the second slot is the grating for ventilation, though even with the ventilation slot the usual precautions for an open-air cooler apply: you’ll need a case with enough airflow to handle the roughly 200W of heat the card is capable of dumping inside of your case.

Rounding out the package is the usual collection of dongles and materials. Sapphire includes 2 molex-to-6pin PCIe adaptors, an HDMI to DVI dongle, a miniDP to DisplayPort dongle, a DVI to VGA dongle, and a 1.8m HDMI cable. Along with the dongles Sapphire packs a quick start guide and a driver installation CD.

The only thing you won’t find packed in the box is TriXX, Sapphire’s in-house overclocking utility. TriXX has been around since the 6900 series, but as this is the first high-end Sapphire card we’ve reviewed since it was released, this is the first time we’ve had it available for a review.

Fundamentally TriXX is a fairly well designed, albeit barebones overclocking utility. Along with an info readout similar to GPU-Z, TriXX provides overclocking and fan control support for Sapphire’s cards, including support for custom fan profiles and more importantly voltage control. With TriXX it’s possible to overvolt most of Sapphire’s performance and high-end cards, and as Sapphire uses AMD reference PCBs it also works with any other cards using AMD’s PCBs. 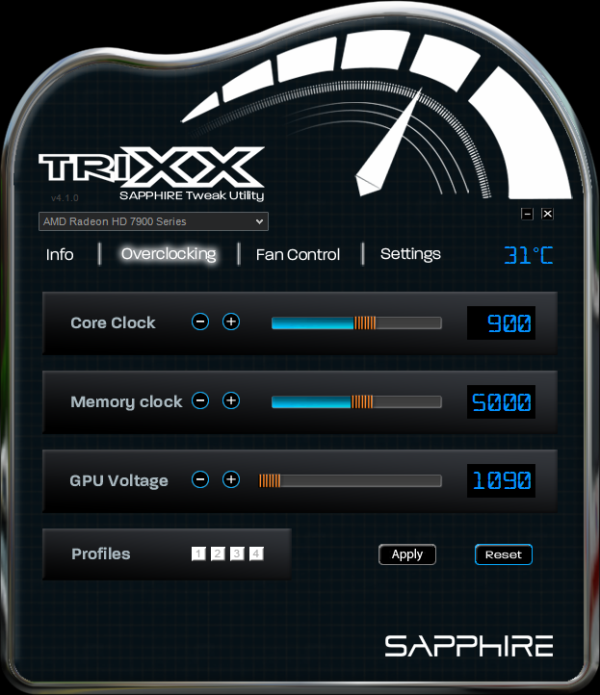 Beyond these features there’s little more to TriXX. It’s not an all-encompassing video card utility like MSI’s Afterburner, which means it comes up short if you need more functionality but it's exactly what you need if you just want to overclock. To that end it’s a clear step up compared to most other manufacturer’s poorly designed utilities, and from a design perspective its only real sin is the hard to read blue-on-black text. Otherwise it’s a competent overclocking utility that does exactly what it’s supposed to and provides voltage control for those who need it.

Finally, Sapphire will be selling the 7950 OE for $479, $30 over the baseline 7950 MSRP. Meanwhile the warranty on their card is their standard 2 year warranty.

+ Submit News
TSMC to Customers: It's Time to Stop Using Older Nodes and Move to 28nm