Amazon announced three new Kindles back in September: the fourth generation Kindle, the Kindle Touch (and Kindle Touch 3G, both of which are identical aside from the 3G antenna), and the Kindle Fire. The Kindle 4 was available on the same day, and we've already taken a good look at it. Our Kindle Fire review is forthcoming. That leaves the Kindle Touch, which we're going to talk about today.

The Kindle Touch is Amazon's first touchscreen e-reader - past Kindles have used nothing but buttons for navigation, even as competing products like Barnes & Noble's Nook Simple Touch began to incorporate touchscreens. At $99 and $149 for the wi-fi and 3G versions ($139 and $189 for the ad-free Kindles), the Kindle Touch is priced competitively, but how does the touchscreen actually impact your reading experience?

Before we get started: Many things we covered in our review of the non-touch Kindle (hereafter referred to as the Kindle 4, to avoid confusion), including screen quality, page refreshes, supported file formats, software updates, and general usage, are still applicable here. If you haven’t read it yet, you should look at our Kindle 4 review before continuing.

The Kindle Touch’s box is nearly identical to the Kindle 4's: an unadorned cardboard box containing just the Kindle, a micro USB cable, and a small cardboard insert with basic directions for powering on and charging the device. The manual proper, which has more detailed directions for using the Kindle’s touch controls and other features, is stored on the Kindle itself, and will be launched automatically at first startup. 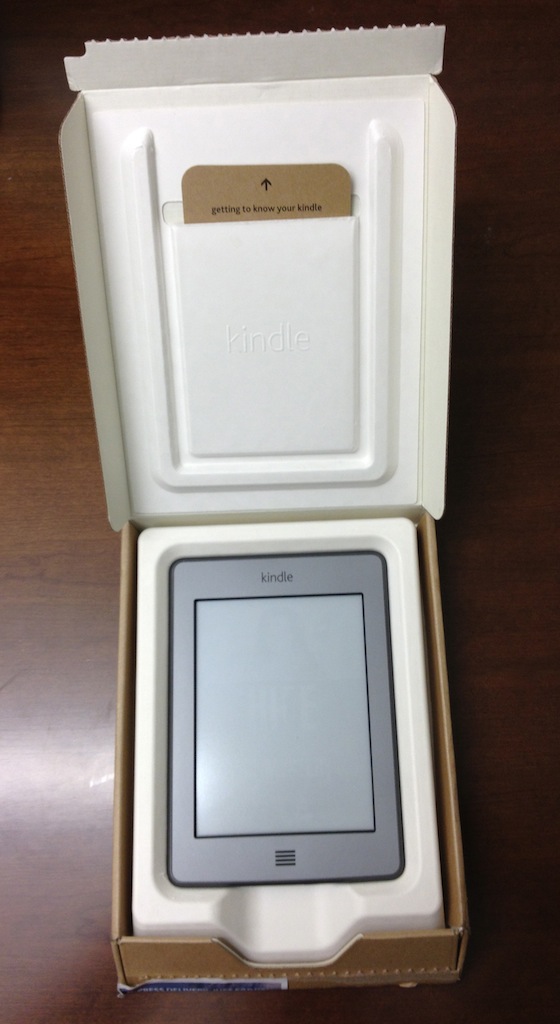 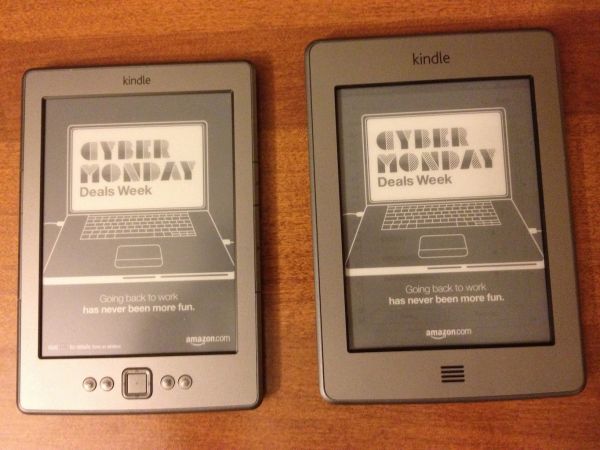 Kindle 4 on the left, Kindle Touch on the right

The Kindle Touch’s increased weight is partly due to the larger battery, which at 1420mAh (3.7v) is capable of up to two months of use with the wireless turned off (compared to one month for the Kindle 4).


FCC Internal Photos - Note a microSIM, similar packages and arrangement to the Kindle 4

Based on the FCC's internal photos of the Kindle Touch WiFi and 3G (pictured above) It’s pretty safe to assume that most of the internals here are the same as in the low-end Kindle: a Freescale i.MX50-series Cortex A8 SoC running at up to 800MHz, an Epson KCRE7000 E-ink display controller, an Atheros AR6103 chip that provides wireless b, g, and n Wi-Fi speeds of up to 72.2 Mbps on the 2.4GHz band, and 256MB of RAM from Hynix. Flash memory storage is bumped up to 4GB from 2GB, and about 3.21GB of that is usable. An audio controller and a GSM 3G modem (on the Kindle Touch 3G) round out the cast.

Unlike the 3G connectivity of Kindles past, the Kindle Touch 3G’s connection won’t give you free and unfettered access to the Internet. Here, it’s used solely for WhisperSync, for browsing the Kindle Store, downloading purchases, or for looking at Wikipedia - no other sites are available without a wi-fi connection. This move is probably a good business decision on Amazon’s part (and, given the uneven nature of the Kindle’s still-experimental web browser, probably not a terribly disruptive one), but if web surfing is something you do with your current Kindle 3G, prepare to make some adjustments before upgrading to this model.

The Kindle Touch uses version 5.0 of the Kindle software (compared to 4.0 in the non-touch Kindle) - the layout and operation are mostly the same, but the implementation of the touch keyboard and controls and the new X-ray feature were apparently enough to merit the bump in numbering.

X-ray, exclusive to the Kindle Touch and available only for some of the books I tried it with, is an extension of the Kindle’s existing search functionality. Invoking the X-ray feature will search the full text of the page or chapter for other instances of that page's names and terms in the rest of the book, allowing you to see how often they appear in the book and to jump between appearances. It’s a handy feature if you’re in the midst of a dense political tome or some massive long-running multi-volume fantasy fiction series, and I hope it eventually makes its way out to the rest of the Kindle ecosystem.
Touchscreen, Audio, and Conclusions
Tweet
PRINT THIS ARTICLE
Comments Locked