The PC-exclusive shooter Hard Reset is uncompromising in its old-school ways. There is no cover. Enemies bum rush you in disorganized hordes. Glowing green health packs and red and blue ammunition litter every environment. It’s comforting, in a way, to play a modern game that feels like it was developed ten years ago. It’s also frustrating, for as good as Hard Reset’s action can be, the overall experience is too short and uneven to break free of design flaws I thought we'd left behind.

Hard Reset takes place somewhere in Europe in 2436. You play as Major Fletcher, an Army Combat Veteran dispatched by the shadowy Corporation to protect mankind from the robot menace. The rest of the confounding Philip K. Dick-cum-Matrix plot is delivered via motion comic cutscenes in which Fletcher curses at whoever’s trying to explain his next objective. It’s a good thing developer Flying Wild Hog prioritized almost every other aspect of the game, as the cyberpunk mishmash does little more than distract during loading screens.

While narrative clearly isn’t their strong suit, Flying Wild Hog does know a thing or two about combat. Hard Reset’s weapon selection is limited at first glance – an automatic rifle and a lightning-based energy weapon – but multiplies fivefold after you begin the upgrade process. Each of the two primary guns can morph into four others, and the accompanying animations of these intricate transformations had me changing weapons often just for the visuals.

The two-gun design helps set Hard Reset apart from its modern shooter brethren. What weapon to use is rarely if ever dictated by the game. Grenades pull from the same pool of ammo as shotgun shells, electric mortars from the same as plasma blasts. The guns never reload, either (they simply empty until you find more on the ground), and you wouldn’t want them to. Every second spent not shooting increases the likelihood of slaughter at the hands of maniacal robots.

Hard Reset’s robot masses trip over one another to kill you. In fitting with the story of ambitious AI Hard Reset would love to be telling, the robots, while never tactical geniuses, become increasingly complex as their designs more closely resemble humanity. Enemy types conform to a sort of evolutionary ladder of AI: smaller creatures swarm you with tiny buzzsaws and helicopter blades, hulking mechs charge you shoulder first with little regard for the environment, and creepy humanoid soldiers wield shotguns and rocket launchers. 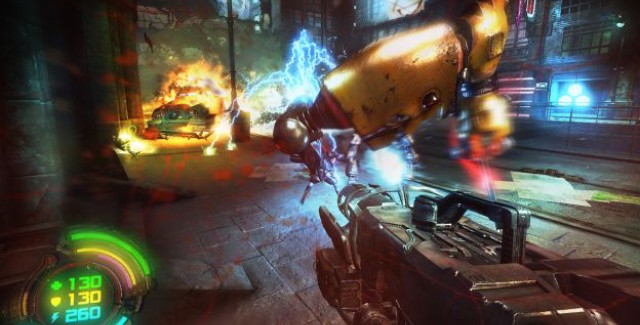 You’ll fight them in corridors, in parking lots, on rooftops, and in blown-out office buildings. Environmental traps, glorified explosive barrels such as ATMs and hovercars, prove invaluable means of crowd control. Encounters are often cordoned-off affairs, with the next doorway or access panel inaccessible until all enemies are cleared. While this does make for some exciting arena combat chock-full of circle-strafing and backpedaling, it also highlights two of Hard Reset’s biggest issues: difficulty spikes and checkpointing.

I am not ashamed to admit that I ratcheted the game down to Easy mode about an hour in. Barely scraping by on luck has a certain dramatic appeal, but it loses its luster after the third or fourth attempt at the same room. It’s simply too easy for larger enemies to box you into a corner, trapping you on funky level geometry and pummeling you into oblivion.

The ability to quick-save might have ameliorated some of these frustrations, but Flying Wild Hog instead opted for checkpointing. This does allow them to better control the pace at which players progress, but the frequency of unpredictable difficulty spikes makes having to play any section (let alone a monstrous, extended boss fight) more than twice an incredible chore.

Despite my issues with Hard Reset’s pacing, I never wanted for visual stimulation. Hard Reset’s aesthetic – gloomy grey vistas of skyscrapers dotted with burning neon lights – beautifully marries Blade Runner with BioShock. Flying Wild Hog’s proprietary engine is no slouch, either, and it will reward high-end systems. Though reminiscent of Unreal, I noticed none of the texture pop that so often plagues Epic’s engine.

Hard Reset’s $30 price tag makes it a difficult recommendation. In the heat of battle, it’s excellent. It’s most of what you want from a shooter inspired by id classics and Serious Sam. But it ends abruptly after roughly five hours, teasing much in the way of your protagonist’s abilities while resolving no conflict and explaining next to nothing. A new game plus feature, dubbed EX Mode, makes tackling the higher difficulties slightly more palatable but doesn’t adequately compensate for the tumultuous difficulty curve and rushed ending. Wait for a sale or for Flying Wild Hog to deliver a more substantial, more polished sequel.

A copy of the game was provided by the developer for this review. Hard Reset is currently available on Steam for $29.99. You can find the hardware requirements below: