The last time we took a look at a Compal whitebook (again courtesy of CyberpowerPC), we noted to Compal that their whitebook wasn't a shark, perfect and needing no further evolution. Their 15.6" shell had gone largely unchanged since the dawn of the 15.6" form factor, missing modern connectivity like eSATA and USB 3.0 and exhibiting an aesthetic that seemed like a relic from a bygone era. When Compal updated the exterior of their 15.6" flagship along with the interior update to Sandy Bridge, it sounded like a good opportunity to see just how much the notebook had evolved. Exit the old NBLB2, enter the PBL21. 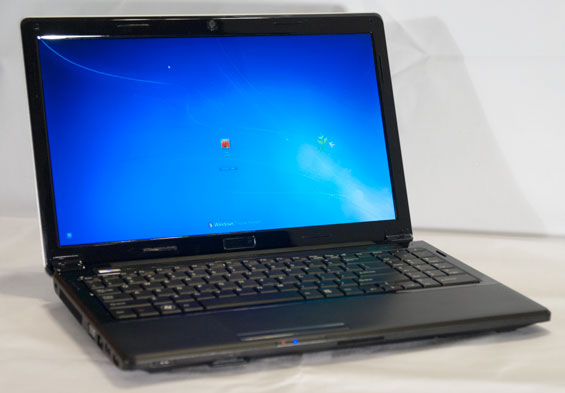 The march of progress has been a long time coming for Compal. Ever since the start of my tenure way back at NotebookReview, people have been consistently curious about their 15" notebooks. These machines always featured high-resolution screens and powerful dedicated graphics in an appealing form factor. The shell stagnated for a long time, but with the PBL21 that era comes to a close. Updates to Sandy Bridge and NVIDIA's GeForce 500M series accompany a healthy change in style.

I find the more notebooks I test the more fond I become of Intel's Core i7-2630QM. Last generation didn't really have a proper entry-level quad-core unless you count the Core i7-720QM, and that chip was a rare find south of a grand. But Intel seems to be pricing the i7-2630QM to sell, because I'm seeing it pop up all over the place; on NewEgg you can find it in an Acer notebook for just $699. It's a good thing, too, because while the i7-720QM occasionally found itself having a hard time competing with its dual-core brethren, the Sandy Bridge-based i7-2630QM is plenty fast. It starts at a 2GHz clock speed and can turbo all the way up to 2.9GHz on one core or 2.6GHz on all four cores, and each of those cores is Hyper-Threading enabled.

Strapped to the i7-2630QM's memory controller is 8GB of DDR3-1333 in two DIMMs, and supporting it on graphics duty is NVIDIA's GeForce GT 540M with 2GB of DDR3 (honestly far more than this GPU can really take advantage of). I'm curious to see how well the GT 540M competes with the last model's AMD Mobility Radeon HD 5650. In the Compal PBL21, the GT 540M features 96 of NVIDIA's CUDA cores, with a base clock speed of 672MHz and the shaders operating at 1344MHz. That 2GB of DDR3 is thankfully strapped to a 128-bit memory bus and running at an effective 1.8GHz. It's not blazingly fast, but mercifully the benefit of a 1080p 15.6" screen is that running at a lower than native resolution doesn't look that bad.

For storage duties, CyberpowerPC equipped this review unit with a 128GB Kingston SSDNow V Series SSD. It's not the fastest SSD on the market, but it still beats mechanical storage for speed and it keeps costs down. Connectivity has gotten a small but much appreciated boost with the new chassis, though: the Compal PBL21 is now USB 3.0 enabled (but still no eSATA).