The E6410 stock configuration is an attractive looking "slate silver" cover, with the appearance of brushed aluminum. I believe the cover is still plastic, but the main body comes with a "tri-metal" magnesium alloy frame that feels very solid. If you want to make a bit of a statement, you can opt for a blue or red cover. I'm not one for fashion statements so I'm perfectly happy with the slate silver model and "boring" appearance—in fact, I quite like the look of the E6410. It's classy and subdued in my opinion, but then you know what they say about opinions….

Comparisons with the ThinkPad T410 are easy to make. Both have similar specs and pricing, though I have to give a clear edge to the T410 for feeling more durable. Mostly, it's the LCD cover on the Dell that doesn't match up to ThinkPad standards—a compromise to get something not quite so "boring" as ThinkPad black perhaps. ThinkPads also have a textured non-slip coating so that you're less likely to drop them; I'm not sure how often that helps, as I've been careful enough with my laptops over the years that I have yet to drop one, but if you're prone to such accidents Lenovo is probably the better bet. The hinges on the E6410 do feel very solid, however, and I have no doubt they'll withstand plenty of use and abuse over the years. 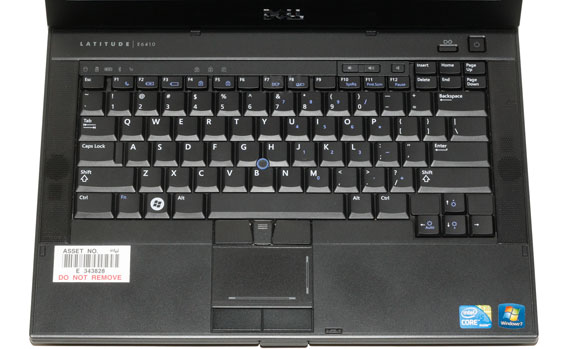 One area where the Latitude and ThinkPad are again similar is in the keyboard department—and that's a good thing. ThinkPad has the ThinkLight while Dell offers LED backlighting (I wish the E6410 Intel ordered included LED backlighting…), but both have a similar keyboard design and feel. Having used both, I actually found I prefer Dell's keyboard in most regards. One of my few complaints with the keyboard is something I've mentioned with other Dell business laptops (i.e. the Precision M6500): there's no "context menu" key (usually found in the lower-right area between the CTRL and ALT keys). It's something I can live without, but I do miss it on occasion. Key travel and feedback is good, there's no flex to speak of, and it's a spill-resistant design. In fact, other than a few minor differences the keyboard is almost a clone of the ThinkPad design, including a TrackPoint equivalent in the center for those who dislike touchpads.

Speaking of the touchpad, that's where we start to encounter more noteworthy differences. Dell's touchpad includes the expected gesture support, but it's on the very small side for a 14.1" laptop. When you combine the touchpad with the Track Stick and its three associated buttons, plus the rather large touchpad buttons, you start to run out of room fast. Dell also has an extra inch gap between the LCD and the top of the keyboard, so the palm rests are smaller than the Lenovo T410. While the feel of the keyboards is nearly equal in my book (with a slight nod to Dell), the layout and position of the keyboard and touchpad is slightly better on the ThinkPad. Then again, I'm not much of a fan of the Track Stick/TrackPoint and would happily give that feature up to reclaim some space for a large touchpad. Ultimately, I have hailed the ThinkPad keyboard as my favorite laptop keyboard based purely on the typing experience, and I'd say the current Latitude matches it. They're both solid and provide good feedback, without going for style points like so many chiclet designs.

My out-of-box experience with the E6410 wasn't quite as rosy as my keyboard experience, however. First, while I'm happy to have a matte LCD, I wish the quality were more like the RGB LED panel in the M6500. To clarify, the ultra-wide gamut isn't really necessary, but matte displays are usually about 20% lower contrast than glossy LCDs. When you start with a low-contrast 250:1 panel tech and then go matte instead of glossy, the result is a very lackluster 200:1 contrast ratio (give or take). It has a great resolution, and for the higher premium that business laptops demand there really should be better contrast options available. At least it's bright and has a nice 1440x900 resolution, but the $80 upgrade deserves more than a resolution bump.

My other issue with the E6410 after unboxing and setting it up is that it was frequently very sluggish. I struggled to determine the cause, other than I'd usually see the HDD activity light active when the system would lag. After uninstalling a few applications (goodbye Trend Micro Business Security Services), I defragged the hard drive. I'm not sure what was going on, but the drive appears to have arrived very fragmented because afterwards the sluggishness all but disappeared—almost, but not quite. Unfortunately, while most of the E6410 line ships with 7200RPM hard drives, the base model (that Intel specced out) goes with a 160GB 5400RPM drive; it's hardly a fitting companion to the rest of the laptop!

Worth noting is that while the Latitudes may not be loaded with quite so much bloatware as consumer laptops, even with a "clean" install (but with the Dell utilities still enabled) the E6410 is sitting at over 65 processes. I'd also say there was a slight feeling of sluggishness in general use because of the lack of discrete graphics; Intel HD Graphics isn't fast enough for most games, but if you're used to a desktop with a decent GPU you'll likely notice the difference even in mundane tasks. We're certainly interested in seeing what Sandy Bridge will do to shake things up, though even the fastest systems will feel slow if they're bogged down by extra applications and utilities—especially if they're running conventional hard drives instead of SSDs.

All things considered, I actually like a lot of what the Dell Latitude E6410 provides. It has a classy aesthetic and feels incredibly solid, and it's small enough to be portable but large enough to have room for plenty of performance options. When looking at the Dell XPS 15 (L501x) last month, I was very impressed with the feature set, but the aesthetics are understandably not something that will please everyone. What I'd really love is to get more of a combination of the best that the Latitude line has to offer with the best that the XPS line has to offer. Take the Latitude keyboard and build quality but combine it with the LCD panel, speakers, and GPU options in the XPS 14/15 and you'd have a potent laptop that most people would be happy to use.