It’s 12:43AM and I just got back into my hotel room. I spent the past few hours in AMD’s suite a block from IDF trying to get to the bottom of an issue we discovered in our post on AMD’s Zacate GPU performance numbers earlier this week.

Let’s recap. Zacate is AMD’s 18W APU aimed at the mainstream notebook market (~$500 notebooks). The APU features a pair of Bobcat cores and a Cedar-class AMD DX11 GPU. Spending some time with the physical Zacate package, it seems to have a single 64-bit DDR3 memory interface ala Atom. Unlike Atom however, both the Bobcat cores and the DX11 GPU should be relatively high performance.

Earlier this week, AMD showed us the first public demonstration of Zacate. In its suite were two systems: a Zacate test platform and a Core i5-M 520 notebook from a major OEM. Both systems were configured with 4GB of memory and were running the 64-bit version of Windows 7 Premium.

The first demo we saw on Monday was the system running City of Heroes. In CoH Zacate managed to reach frame rates around 2x of what we saw on the Core i5-M 520. AMD also ran through a number of IE9 performance tests including the Psychadelic HTML5 benchmark and the Amazon Shelf test. In both of those tests, the Zacate platform was significantly faster than the Core i5-M 520. And it was those IE9 tests that seemed suspect. 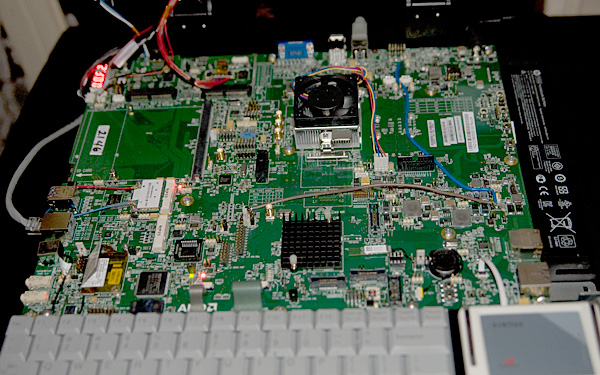 I didn’t think much of it at first, but Zacate managed a ~10x performance advantage in the IE9 Psychadelic benchmark. While Zacate should have a higher performance GPU, it shouldn’t be that much faster. Something was amiss.

I borrowed a Core i5 notebook from Intel (we are at IDF after all) and ran the same tests on it. The performance was much better than what I saw in AMD’s suite. I went back to AMD to find out exactly what was going on.

I brought up the issue and AMD immediately began looking into it. AMD used the latest drivers made available for this particular Core i5 notebook on the manufacturer’s website. Those drivers were version 2104 dated 3/31/10. AMD explained that these systems were configured about a month before launch and they were using the latest drivers available on the manufacturer’s website at the time. This particular OEM didn’t offer a newer version of the Intel HD Graphics drivers via its website. To make matters worse, Intel’s updated HD Graphics driver wouldn't install on the notebook. Some notebook OEMs prefer to provide their own display driver updates. In those cases, the Intel HD Graphics drivers available from intel.com won’t install. Despite only having a single Core i5 machine for all of its press demos for tomorrow, AMD agreed to let us manually install the driver (extract the driver and force device manager to update the driver manually) on the i5 system. 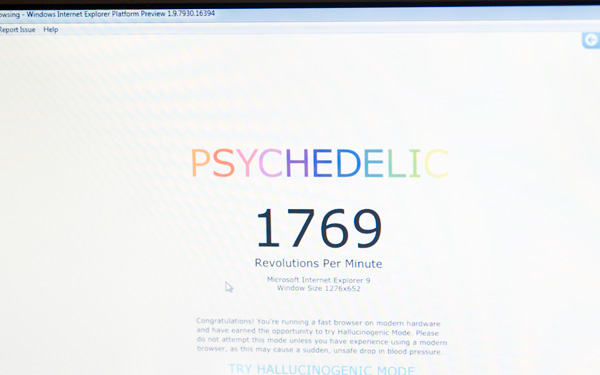 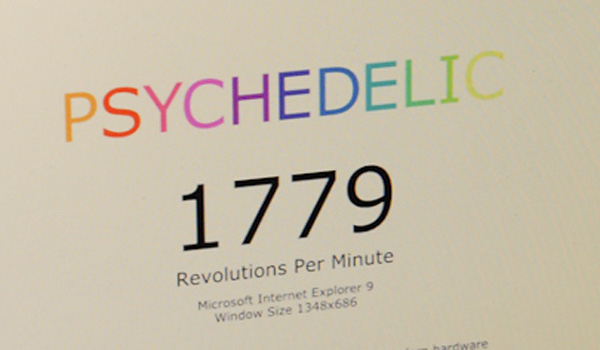 The updated driver brought the IE9 performance tests to parity with Zacate. In fact, it looks like the IE9 benchmark doesn’t scale too far with GPU performance (apparently discrete cards don’t score much higher than what we’ve seen here). 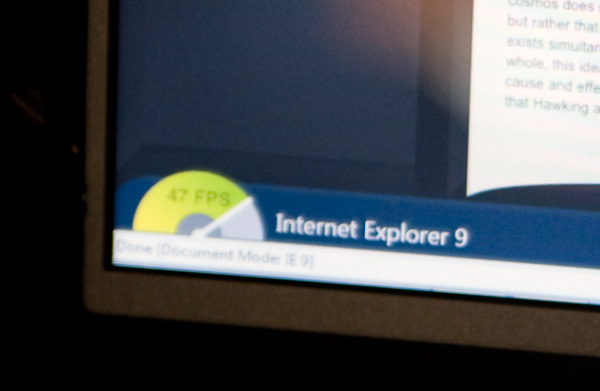 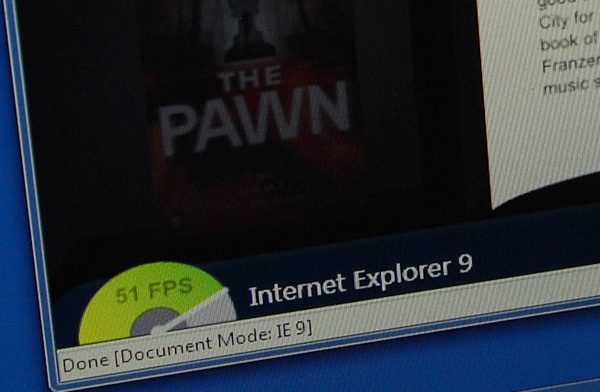 At this point we had an issue. The IE9 benchmarks AMD was showing off weren’t an accurate comparison of the two architectures. While valid for the only driver revision supported on this particular Core i5 notebook, the scores weren’t valid for a Zacate vs. Core i5 architecture comparison. AMD wanted to make sure there was no confusion about the GPU performance potential of Zacate so it allowed us to install whatever we wanted on both systems to validate the GPU performance we had seen.

Take a moment to realize exactly what just happened here. In an effort to convince us (and you) that it had nothing to hide and didn’t deliberately attempt to stack the deck, AMD gave us full access to the Zacate platform to do whatever we wanted. AMD wanted us to be completely comfortable with the Zacate comparison.

We downloaded the Batman Arkham Asylum demo off of Steam and loaded it on both the Zacate and Core i5 systems (AMD originally bought two copies of the full game via Steam only to find that SecureROM kept crashing on the Zacate platform at launch, way to go SecureROM). We set both machines to 1024 x 768 at high quality settings. We played through the beginning of the demo as well as FRAPSed a short walk through the first room you’re dropped in: 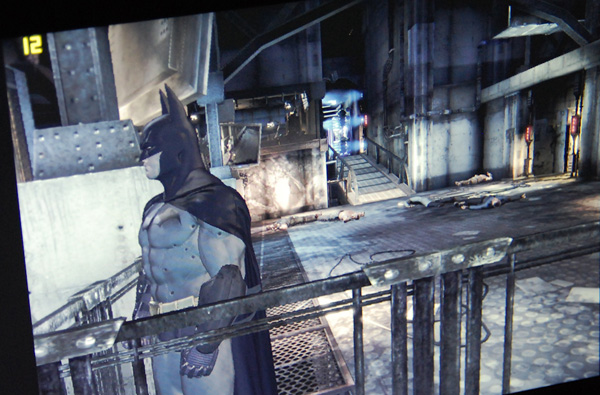 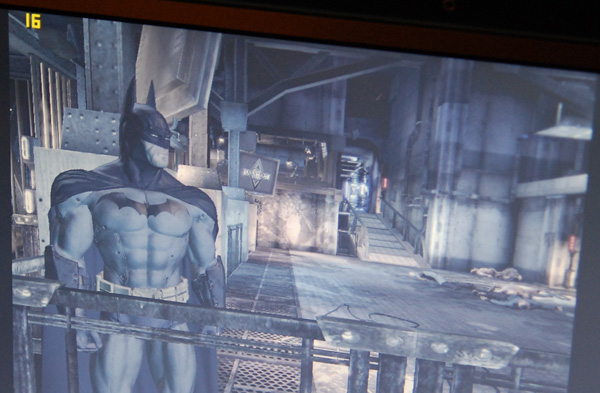 The actual gameplay was noticeably quicker on Zacate and the numbers show a 45% performance advantage. This is huge. To sanity check that data we fired up City of Heroes on both machines and played around with them. The frame rate varied depending on where you were in the scene and we saw peak frame rates close to the 2x advantage repeated in our second pass with updated Intel drivers. Note the differences in contrast below are due to the vastly different screens the two systems were using. 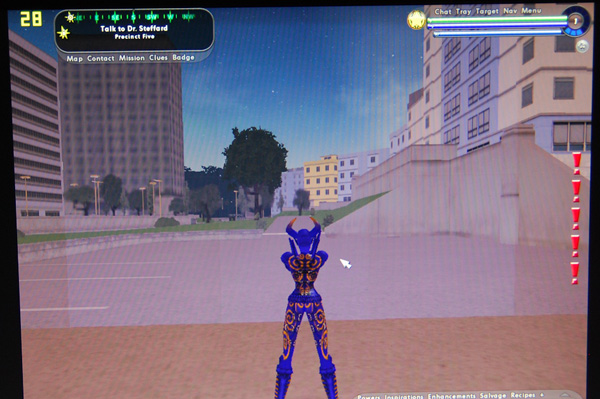 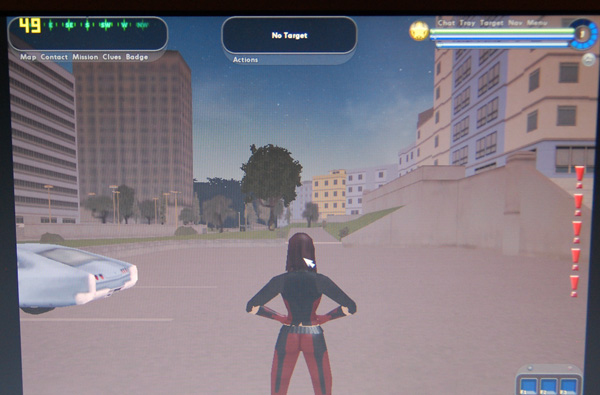 We put together a quick FRAPS walkthrough to show how the average frame rate improved:

On average we saw a 55% improvement over the Core i5 system.

AMD wanted to highlight the DirectCompute performance of Zacate and let us publish the first results from the platform running the N-Body Simulation benchmark: 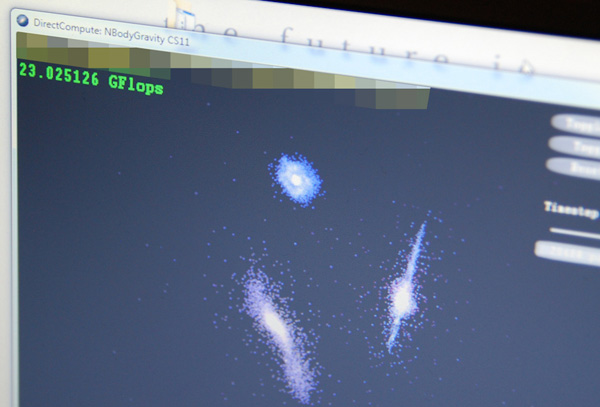 AMD views Fusion as a way to not only bring better gaming performance to the market, but also enable a lot of new GPU compute applications. Remember that Zacate and Ontario are going into systems priced at around $500 or less. With this type of GPU compute in the entry level, it’s only a matter of time before developers start to do something with it.

It’s very rare for any public company to make an on the spot decision to let us benchmark and publish test data of an unreleased part without having ever seen it before. The first time the AMDers in the suite saw Zacate running Batman was when we installed it. To be honest, it was probably the most open and flexible I’ve ever seen AMD be. I knew if the IE9 numbers changed that it would call the City of Heroes numbers into question. By allowing us to rerun everything as well as add an additional title (one that we’ve used more recently) AMD handled the situation perfectly.

At the end of the day my take on Zacate (and Ontario) hasn’t changed: these two APUs have the potential to make the low end netbook/notebook market interesting again.