Fans of custom video cards have undoubtedly found themselves a bit disappointed with the Radeon HD 5800 series. Due to a perfect storm of low GPU yields from TSMC and NVIDIA’s late arrival with the GTX 400 series, the first 6 months for the 5800 series was nothing other than bonkers. AMD was selling GPUs to their partners as fast as they could come out of TSMC, and their partners were selling finished boards to OEMs and-end users alike as fast as they could be assembled. Even at prices over MSRP, the 5800 series flew off the shelves, leaving AMD’s partners with little-to-no supply of GPUs to tinker with. Custom 5800 series cards effectively took a 6 month vacation.

Custom cards are almost always interesting for a few different reasons. Often it’s a chance to see what AMD’s partners learned about a GPU over the preceding months and are trying their hand at producing something cheaper. Other times it’s throwing cost-efficiency out the window in the name of better components and coolers. And yet in other times it’s about producing a card that fills a specific niche, such as hardcore overclockers or users with cramped cases.

Today we’re looking at 3 such cards, each taking a different approach in their custom design. MSI’s Lightning is the overclocker and Sapphire’s Toxic is the build-it-better card, while Gigabyte’s Super Overclock attempts to straddle the line between the two by doing both at once. Ultimately however all 3 shoot for the same goal even if they go about it in different ways: maximizing performance.

Finally it shouldn’t come as a surprise that with all 3 cards designed to be superior 5870s that they command a superior price. At $480-$500, all 3 cards are solidly in the luxury category. 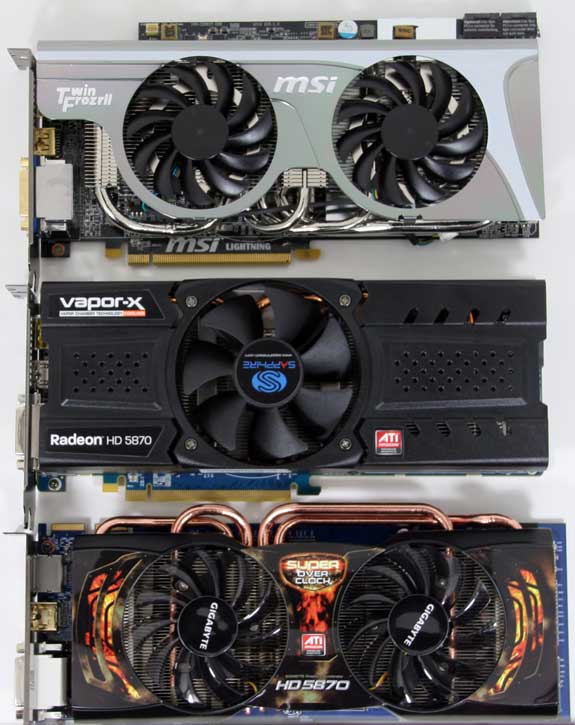