When Steve Jobs announced that the MacBook Air would have a 5 hour battery life, I laughed. Short of Apple sticking a hydrogen fuel cell in the Air there was simply no way you were going to get 5 hours out of this thing under any sort of heavy usage. What shocked me even more is how few questioned the 5 hour figure. Have we all forgotten about optimistic battery life ratings? I like to give Apple the benefit of the doubt and not call out RDF whenever a new product with exciting features launches but seriously folks - 5 hours? 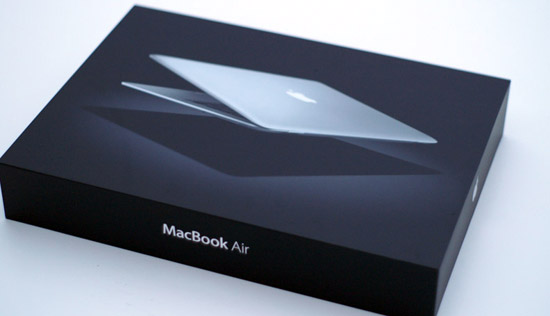 We're still hard at work on the MacBook Air review, but this data was too important not to share right away. By now you've heard that under "normal" usage, the Air can only manage about 2.5 hours of battery life. That's true and at the same time it isn't. I touch on part of this in the review, but the MacBook Air isn't designed to be your work notebook - no ultra portable is. It's a notebook for a writer, for someone taking notes in class; it's a second notebook, or a third system. As such, the typical usage model can be very different than your standard notebook.

At the same time, most of the people considering the Air aren't looking at it as a second notebook or a third system, they are looking at it as their primary notebook (and will be left sorely disappointed or frustrated after a while). The end result is that you need a handful of battery life tests to really cover all bases. And that's what I've done.

The wireless web browsing test uses the 802.11n connection to browse a series of 20 web pages varying in size, spending 20 seconds on each page (I timed how long it takes me to read a page on Digg and came up with 36 seconds; I standardized on 20 seconds for the test to make things a little more stressful). The test continues to loop all while playing MP3s in iTunes. This test is designed to simulate the intended usage of the MacBook Air: something you can carry around with you to class, work, on the train, etc... to comfortably and quickly browse the web, take notes and generally be productive all while listening to music. It's like a big iPhone...without the phone part.

Despite the lack of an internal optical drive (I've never been so tempted to use the f-bomb in a review before), the MacBook Air will play DVDs. You just kind of need to have them on your hard drive and I'll just assume you have the original disc safe at home. This test is simple: I play Blood Diamondin a loop until the battery runs out.

The final test is the multitasking workload, and this test isn't really that intensive for a normal system but thanks to the terribly slow iPod hard drive in the Air - it's quite stressful. For this benchmark I'm downloading 10GB worth of files from the net (constant writes to the drive), browsing the web (same test as the first one) and watching the first two episodes of Firefly encoded in a 480p XviD format (Quicktime is set to loop the content until the system dies). There's nothing too extreme about this workload, I could definitely come up with worse - but this would be light to moderate usage on a MacBook or a MacBook Pro, and it'll show how the Air stacks up.

The system was set to never shut off the display and never go to sleep, although the hard drive was allowed to spin down when possible. The display brightness was set at 9 blocks (just over 50%), which I felt was comfortable for both day and night viewing. The system itself was a standard MacBook Air with an upgrade to a 1.8GHz processor, but used the regular PATA hard drive - not the SSD (I'll touch on SSD performance once I get my drive).

Ready for the results? 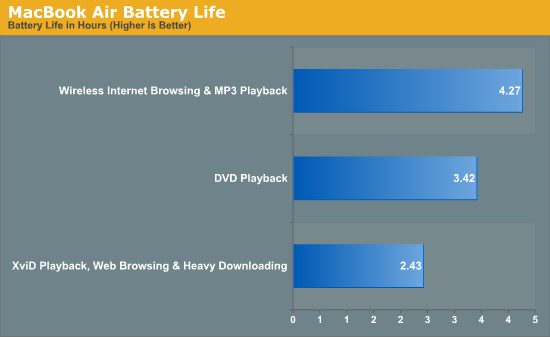 Apple's 5 hour claim is laughable but not as much as I expected. If I wanted to I suspect I could hit 5 hours by making the web browsing test less stressful, but my focus was on real world usage scenarios, not proving Apple correct. Regardless, 4 hours and 16 minutes doing what I consider to be the intended usage model of the Air is respectable. It's not great, but it's not terrible either.

The DVD playback test is also decent, you can watch a full length movie on the Air (even The Godfather). But watching two back-to-back isn't possible (although I do think you could squeeze two viewings of Rambo in there and frighten your fellow airline passengers).

And then we have the multitasking scenario. At just under two and a half hours, this isn't your do-everything notebook. That should've been obvious from the get-go with the whole lack of an optical drive, 2GB memory limit and no built-in Ethernet port.

I'll save more thoughts and discussion for the full review but this data was too important not to share.

On a side note, in doing the DVD playback testing on the MacBook Air I realized something I hadn't previously about Leopard. It looks like Apple finally fixed the horrible de-interlacing problems with its previous DVD player application. There are now actual de-interlacing controls and image quality seems vastly improved; I may have to run HQV to see what sort of improvement there is over Tiger. What took me so long to notice this about Leopard? Well it seems like Apple has finally fixed issues with DVD playback, just when everyone is starting to move to HD-DVD and Blu-ray. Great.

Be sure to read our other MacBook Air coverage: