The Other Office: Microsoft Office 2008 for Mac Review

A lot has changed in the years since Microsoft released Office 2004, such that Microsoft is not only competing with itself as it was when Office 2004 was released. Chief among these changes is that Apple has fleshed out what was just the Keynote presentation software in to the complete iWork suite. iWork isn’t competitive with Office 2004 or 2008 on a feature-for-feature basis (mostly because iWork is targeted primarily towards home users) but it’s leaps and bounds better than its predecessor AppleWorks, enough so that for the first time ever Microsoft has some real competition for office suites on the Mac.

Meanwhile the Mac OpenOffice.org suite port/fork, NeoOffice, has been hammered out over the years to give Mac users a third viable choice in office suites. Like iWork, NeoOffice is not at feature-parity with Office 2008 so it isn’t and can’t be a complete Office replacement in all cases, but it’s also free, coming in at $80 cheaper than iWork and $130 cheaper than Office. Unlike 2004, if you absolutely need an Office suite of some kind you won’t need to suffer through OpenOffice.org’s un-Mac X11 implementation or pony up any money for Office. 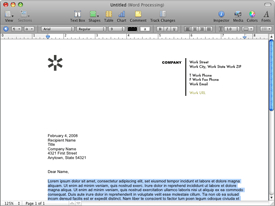 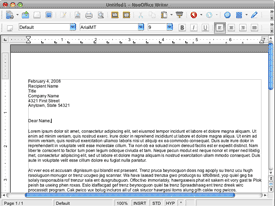 The competition: Apple's iWork and NeoOffice

For Office 2008, Microsoft has released 3 editions of the suite, similar to the editions for Office 2004. At the bottom is Home & Student Edition ($130) which includes Word, Excel, PowerPoint, and Entourage; the only thing missing is Exchange support and Automator support, which Microsoft holds out for the standard edition of Office 2008. Notably unlike Office 2007 for Windows Home & Student Edition, Office 2008 comes with an email client (Entourage) while Office 2007 does not. Following Home & Student edition is Standard Edition ($350) which includes the missing Exchange and Automator support; at $200 for a few extra features this it quickly becomes clear that this is the business user edition of Office. Finally is Special Media Edition ($440) which includes the Microsoft Expression Media application, a media cataloging program that replaces VirtualPC as the companion application for the high-end edition of the suite.

It’s also worth noting that while Microsoft does little to differentiate Office for the Mac and for Windows by name, the products are actually quite a bit different. Office for the Mac is developed by Microsoft’s Mac Business Unit (MBU) rather than the normal Office development group. While the products produce compatible documents and look & work quite similarly, the relationship is nearly superficial at times. Office for the Mac is not Office ported to the Mac, which means there are a number of differences between the products once you get beyond basic functionality. This can be both a good thing (new features better suited for the Mac) and a bad thing (features not available for the Mac).

Chief among these changes is the loss of Visual Basic for Applications support, and the addition of Automator and AppleScript support in its stead. Automator is Apple’s own workflow application for handling macro functionality and repetitive tasks, introduced in Mac OS X 10.4 and AppleScript is Mac OS’s long-standing scripting language. Sadly VBA became a casualty of the move to x86, in removing support for it Microsoft has cited that it would be incredibly difficult to port due to being built around the PowerPC architecture and meanwhile nothing else on the Mac uses VBA. So VBA support has been dropped and Automator/AppleScript integration has been added.

We won’t spend too much time on this change, but don’t take this to mean it’s a small change. VBA macros are a cornerstone of how businesses use Office (with Excel in particular) and dropping them will have a huge ramification on the Mac version of Office. We have heard some rumblings that this could effectively kill a large chunk of the business use of Mac Office (or at least start a riot in Accounting) and while it’s too early to say for sure how this will play out we also can’t discount the concern. Automator/AppleScript is plenty functional, its only problem is that it’s not compatible with the 90%+ of business computers running Office for Windows. In the business world, Mac Office may find itself replaced by Macs running the Windows versions of Office through WINE or virtualization.