Touch it, Bring it

The Apple TV is a low profile device, measuring 7" on each side and only 1.1" high. It's not going to do a good job blending with other home theater components as it is distinctly Apple; it looks a lot like a thinner, flattened Mac mini.

In traditional Apple style the device's form is very simple, there's not so much as a power button on the unit. On the front you've got an IR receiver for the remote and a single power/activity LED. When the system is booting the LED blinks amber, when ready for use it's solid white, and each time it receives a command from the remote it blinks.

The sides of the unit are bare and in the back you've got a row of ports. Given the target market for the unit, Apple went with strictly modern video outputs. The Apple TV only works via HDMI, component or DVI outputs (the latter through an HDMI to DVI converter). Apple doesn't provide you with any cables other than the power cord, so your choice of output will be met with an additional expense to buy the cable.

Complementing the HDMI and component video outputs are two audio outputs: stereo RCA and optical. Of course if you run HDMI to your display you don't need another cable for audio.

What powers the Apple TV? If you read Part 1 of our coverage we discovered that the unit is powered by an Intel Pentium M based on the Dothan core. The ultra low voltage (ULV) Pentium M runs at 1GHz with a 400MHz FSB and features a 2MB L2 cache. Apple chose Intel's 945G chipset but the graphics output is driven by an NVIDIA GeForce Go 7300. The Apple TV currently ships with 256MB of DDR2 system memory and 64MB of GDDR3 for the NVIDIA GPU. 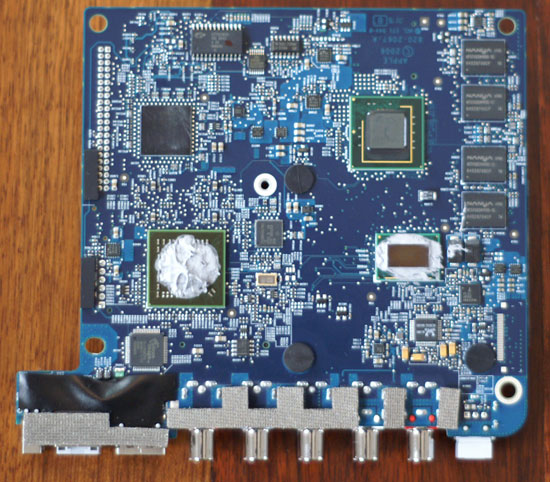 The unit ships with a 40GB 2.5" PATA drive, and our Apple TV happened to use a 4200RPM Fujitsu drive. Upgrading the hard drive appears trivial; a simple swap should suffice, though of course you'll have to copy the contents of the disk over first. The Apple TV's integrated 802.11n wireless is driven by a Broadcom mini-PCI card inside the device; Realtek powers the built in 10/100 Ethernet.

A quick rundown of the specifications paints Apple TV as a notebook without a screen, and a fairly powerful one at that, given the target market. For a box that is only going to be playing relatively light content, Apple made sure it was more than powerful enough.