Kicking off our coverage of the first earnings season of the year for the tech industry, we as always start with Intel. The blue-hued blue-chip company is the first out of the gate to report their results for the first quarter of 2022, with Intel reporting something of a mixed quarter. With revenue down on a yearly basis – thanks in large part to softer client sales – Intel is no longer on a hot streak of setting records. At the same time, however, the company has dialed back its lofty expectations accordingly, and as a result was still able to slightly edge out its Q1 guidance.

For the first quarter of 2022, Intel booked $18.4B in revenue, a drop of 7% from the year-ago quarter. Buffering the company against this revenue drop on a GAAP basis has been an improvement in both operating income and net income, both of which benefitted from some one-off restructuring and investment gains (McAfee equity sale). As a result, Intel booked $8.1B in net income on a GAAP basis, which is a 141% improvement on the year. Otherwise, stripping things back to non-GAAP financials, things more closely mirror the overall revenue picture with a 35% decline in income.

Being that this is the first quarter of 2022, this also marks the first earnings period where Intel’s group restructuring from last summer is reflected in the company’s reports. Other than the Client Computing Group and Mobileye (which Intel is still looking to spin off), the rest of Intel’s reporting groups have all seen significant overhauls. Among other changes, GPUs/accelerators is now its own group (Accelerated Computing Systems and Graphics Group), Intel’s networking and edge products are a distinct group (Network and Edge Group), and Intel Foundry Services sees its revenue broken out as well. Finally, the datacenter group has absorbed Intel’s AI businesses, making it the Datacenter and AI Group.

One result of this is that Intel has, at least for the moment, put the brakes on trying to present itself as a “data-centric” company – which is to say treating client CPUs as something of a legacy business while trying to pump up its datacenter business. Whereas old Intel was getting closer to having datacenter revenue overtake client revenue, new Intel has client revenue firmly in the lead in terms of the largest groups. To some extent this is an exercise in rearranging deck chairs – it doesn’t really impact what Intel makes or their resulting revenues – but it’s a sign that Intel realizes they were too hasty in trying to brush off their client CPU business.

In any case, as the largest of Intel’s revised groups, the Client Computing Group (CCG) remains the bellwether for the company. Its sheer size means it has a major impact on Intel’s overall financials, which is very much the case for Q1. Overall, the group booked $9.3B in revenue, which is down 13% from the year-ago quarter, where Intel booked $10.7B. Meanwhile, operating income for the group fell 34% to $2.8B. 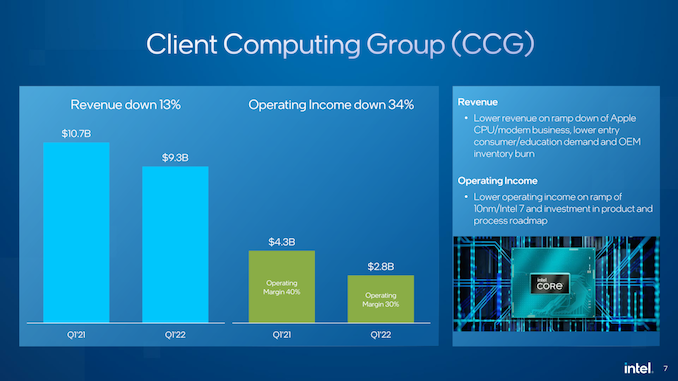 According to Intel, the CCG revenue drop was fueled primarily due to the continued loss of CPU and modem orders from Apple, as well as reduced demand for entry-level consumer devices, and OEMs burning through inventory stockpiles. Digging deeper into Intel’s statements, we find that the drop is almost entirely on the notebook side of matters; while desktop revenue dropped just $129M versus the year-ago quarter, notebook revenue dropped $997M. Unfortunately, Intel isn’t supplying any information about relative changes in ASPs or sales volumes, so it’s hard to tell how much of this is being driven by selling fewer chips, versus having to sell chips at lower prices.

Otherwise, all of Intel’s remaining groups saw revenue gains versus Q1’21. The Datacenter and AI Group (DCAI) booked $6B in revenue for the quarter, which was up 22% from last year. That said, operating income was slightly less than flat, with Intel’s higher revenues coming at the cost of the 10nm ramping, as well as other product investment. According to Intel, the bulk of the revenue growth for this segment came from greater demand for Xeon products from the company’s hyperscale and enterprise customers. 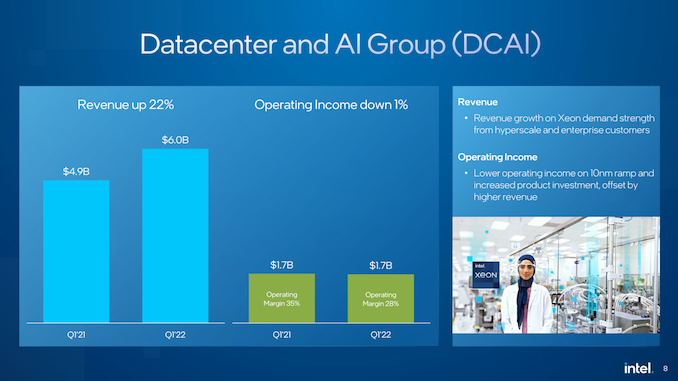 The final of Intel’s big ($1B+) groups post-restructuring is the Network and Edge Group (NEX), which has inherited Intel’s networking, IoT, and connectivity groups. NEX posted $2.2B in revenue for the quarter, which is up 23% over the year-ago quarter. According to Intel, the growth in revenue here was driven by demand for cloud networking products, as well as an uptick in edge hardware deployments.

Rounding out Intel’s portfolio are the Accelerated Computing Systems and Graphics Group (AXG), Mobileye, and Intel Foundry Services. AXG, which houses all of Intel’s accelerator and GPU offerings, is essentially biding its time until Intel’s Alchemist architecture GPUs and accelerators like Ponte Vecchio start shipping in high volumes and delivering significant revenue (>$1B). But until then, it’s something of a money sink for Intel’s balance sheets, as the $219M in revenue booked is but a fraction of the group’s ramping and development costs, leading to an accelerated operating loss of $390M.

Meanwhile Mobileye, which is still being prepared for an eventual IPO and spin-off from Intel, set a new record for the quarter with $394M in revenue, up 5% from the year-ago period. Operating income did take a slight hit, however, as the group prepares for their next-generation products.

Finally, in its debut on Intel’s earnings sheet, Intel Foundry Services booked $283M in revenue for the quarter. This was a 175% jump in revenue from Q1’21, where Intel only fabbed $103M in goods for other customers. Like AXG, Intel is classifying this as an “emerging” segment, expecting revenues to grow significantly in the coming years, and reporting that customers have 30 test chips committed to the Intel 16 process. Still, IFS is not a money-making venture quite yet, as it posted a $31M loss for the quarter, which Intel ascribes to additional investments they’ve made in to the custom foundry business. 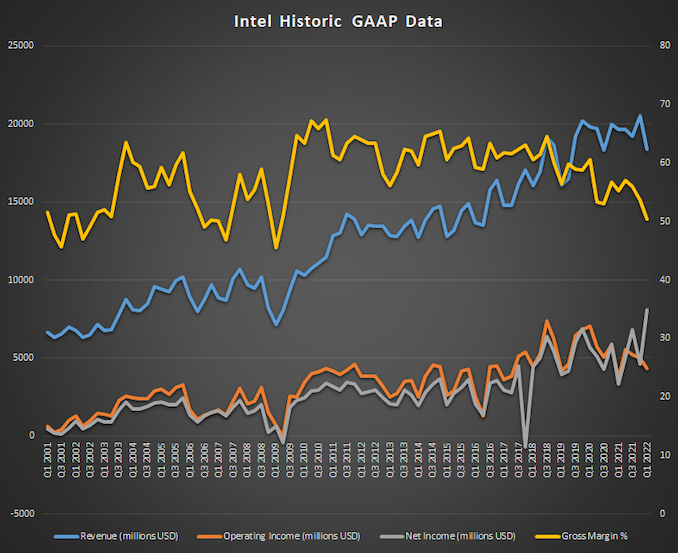 Looking forward, Intel is expecting another slightly down quarter for Q2’2022. At this point the company is projecting $18B in revenue, which would be down 3% versus Q2’21, and a 48% GAAP gross margin. Meanwhile Intel’s revenue projection for the year remains on track at $76B. Notably, neither the quarterly nor yearly outlooks have the gross margin driving above 49%, which if it holds, will be a significant change of pace for Intel. Long a 60%+ company, even in more recent years Intel had typically maintained a 55%+ GAAP gross margin. However, as Intel continues to face stiff competition on both products and fabs, not to mention ever-increasing fab R&D costs, Intel’s CEO Pat Gelsinger has made it clear that he’s willing to sacrifice some of Intel’s vaunted margins in order to make the necessary investments for the long-run.

Driving Intel’s revenue for Q2’22 will be several product lines. While the all-important CCG will not have much (if anything) new to talk about beyond early sampling of Raptor Lake, the second quarter should see a further increase in the number of Sapphire Rapids Xeon chips shipped to Intel’s closest server customers, with a full launch still slated for this quarter as well, if Intel’s most recent roadmap holds true. Meanwhile Q2 will be the first quarter with Intel’s Alchemist GPUs shipping in higher volumes. All told the company is expecting to ship over 4M of the first-generation Xe-HPG GPUs this year.